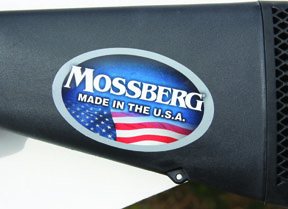 In the early Practical Shotgun (PSG) scene of the 1980s pump-actions were the weapon of choice. If you wanted a quick out of the box fix then Mossberg’s ATP500 (Slugster) was the way to go – 8-shot capacity, rifle sights, cheap and they sold in droves. Me I went for a Remy 870 probably the best and toughest pump ever made, however to make it how I wanted it I had to buy a new 20” barrel, stock and mag extension. Then semi-autos appeared and pumps were dropped faster than a dodgy TV personality!

That seemed to be it for the Mossberg as most of us that made the change to semis opted for the other Remington - the 1100 - and later the 11-87 self-loaders. Again guns were pure sporting so at least a mag extension was required; I also added new Choate plastic furniture with a pistol grip butt. Though Mossberg made a semi-auto it never caught on for PSG, but many years later they have returned to the scene with something built for purpose!

JERRY WHO?
Jerry Miculek is an American competition shooter who started off with handguns and became a living legend. Though getting on a bit he’s still at the top of his game and is a five times 3-Gun champion. For the shotgun section he uses a Mossberg 930 semi tricked out three ways from Christmas; with a muzzle brake, 15-shot extended mag etc.

These guys take it really seriously as it’s all about shaving fractions of a second.

However, for us mere mortals he has worked up the 930 into a cost effective, out-of-the box, comp-ready gun! As we shall see the majority of the work is bolt-on accessories, but there are also a few areas where small tweaks just make the gun that more competitor-friendly and the sort of refinements we might expect. Its full title is the JM Pro Series, Tactical Class (9-shot).

Unlike the plethora of Turkish-made semis, the 930 is all American. The receiver is alloy with a tang-mounted safety, which Mossberg have always used and is much better than the cross-bolt (rear of trigger guard system) employed by most others manufacturers. In this case it sits under the firing hand thumb and is both slotted and enlarged for easy and instinctive operation. The mechanism is gas-operated and self-regulating; in that it can adjust to the power of the cartridge it’s firing. Something that recoil-operated guns have problems with, certainly with lighter loads.

The design is reminiscent of the Browning Fusion/Maxus and Winchester X3 guns with a short stroke tappet that knocks the bolt carrier rearwards to unlock. Unlike the Remy 1100/11-87 there is no direct/ physical linkage between piston and bolt carrier, which must require more energy to move. Locking is by a single rising lug that engages with a pocket in the roof of the chamber extension.

As befits guns of this type the furniture is synthetic, in this case black and very sporting. It shows the typical, low-combed butt so reminiscent of US auto-loaders, with a decent, thick rubber recoil pad and a well sized and shaped pistol grip with moulded-in chequering. A fixed loop is moulded in underneath for a QD-style swivel. The forend is deep and rectangular in section with slim panels of chequering and finger boards above. It fills the supporting hand well and provides plenty to get hold of.

Given the JM Pro Series, Tactical Class is aimed primarily at the Practical/Action shotgunner it comes with a 24”, multi-choke barrel, with three, flush-fit Accu-Choke tubes included along with fitting key. On top is a robust, ventilated rib and large, red bead front sight. The top is grooved to reduce glare as is the top of the action. If you want to fit optics that is not a problem as Mossberg have drilled and tapped it for bases too.

Where we see Miculek’s real contribution is in the receiver detail. Along with the enlarged safety I have already discussed there’s an extended cocking handle, which is just about perfect. Most sporting semis offer a small hook to get hold of, which is not what is required here. It’s an inch tall, 1⁄2” across, circular and knurled for grip. Underneath is an extended bolt release, which is just that bit easier to operate in the heat of the moment!

What I really appreciated was the bevelled loading port which leads the shell naturally into the centre of the shell lifter and then in the mag tube. Also, and unlike some other designs, there are no sharp edges to cut your fingers on. Moving back the trigger guard shows a cocked action button that protrudes from the inside of the front strap and can be easily felt with the back of the trigger finger.

On the rear strap is a trigger stop screw, which I thought unnecessary. I can see its function and is something often used on rifles and pistols to limit excessive blade movement and improve control and therefore accuracy potential. Yes the mech does have a tad of over travel but the break when compared to other repeating shotguns is surprisingly light and crisp. Plus if you wind the screw out you can feel it with your middle finger which is off putting.

The trigger blade is nicely curved and of medium width so no skinny lever. The guard is of medium size, but for me it could have been larger and more bowed as access is all. Though cosmetic a nice touch are the words’ JM PRO-SERIES Tactical Class on the right side of the receiver.

The defining feature of any PSG gun is capacity, which is addressed by the fitting of an extension tube that attaches to the end of the fixed magazine. The JM is no different with a 9-shot (all-up capacity) extension. It locates by a slotted collar at the rear and is stabilised by a fig-8 clamp up front. I think it might be made for Mossberg by Nordic Components as the clamp is identical to the one used on the Stoeger M3000 semi I tested two months ago.

The 930 easily fills to the quoted 9-rounds capacity with #10 in the chamber giving a pleasing payload. One really clever feature here is the end of the mag extension can be unscrewed with the tube and clamp still in situe. This addresses a problem common to hi-cap guns of this type, as the mag spring needs to be long/strong enough to feed all the rounds. If it’s too long it can be a bugger trying to compress half its length while trying to get the other half in the extension tube and screw it on.

Nice touch indeed. One niggle here; there’s no forward sling fitting loop, which would have been useful as a PSG gun without a sling is definitely missing the point!

Apart from my few minor observations, which are easily sorted I reckon the 930 JM PRO-SERIES Tactical Class is probably the best gun out there in its class and price range. Loading is smooth and easy with no spring bind in the magazine also aided by the bevelled loading port. The extended controls – cocking handle, safety and bolt release all come together well and with practice operation become instinctive leaving your eyes to scan for targets.

Trigger pull was good breaking at 3-4 lbs with minimal take up. Length of pull (LOP) at 14” suited me perfectly and the low/angled comb allowed me to get my head/eye right down behind the action. Equally the grip offered front and rear was fine too.

I ran a good cross section of ammo through the 930 from #7 1⁄2 clay loads up to AAA, OO buck and rifled slug. The gun eat them all and spat them out and did not require a running in period! Recoil even with the heavier loads like slug was most agreeable, obviously it increased with power but was still within limits. It patterned very well too, using Winchester Tracker #7 1/2, 2 3⁄4” loads and a full choke I was getting superbly concentric patterns at 25 yards.

Not a lot more to say apart from the fact it would be a keeper for me if I shot any of the Action/Practical shotgun disciplines again!