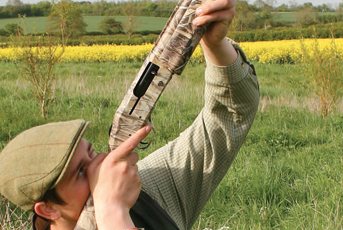 I remember my uncle having an old Mossy (Mossberg) ‘bang and clang’ Model 500 pump action as he called it that he used for everything around the farm from feral pigeons, rats, squirrels, rabbits and pigeons! Mossberg certainly had a typically American kudos to their makeup offering cheap yet reliable shotguns which perhaps lacked a little in the looks departments. Now however there seems to be a little renaissance in the shotgun market, especially with cheap shotguns from Europe, so American scatterguns have upped their game.

The new Mossberg 930 is one such shotgun. The semi auto mechanism is set up for 3” Magnum shells whereas the Model 935 is set up for 3 ½ inch Mag loads. It’s a robust reliable semi available in either shotgun or Section 1 (high capacity) options. Operation is gas/piston and the finish on this example was Max 4 camo, plus you have the option of a vented or ported barrel.

This smoothbore is certainly aimed at the hunting market which suits me! I live in the woods so I wanted to really test the Mossy in its natural environment against real targets as well as pattern plates and simulated rabbits to get an honest appraisal of the 930.

The 930`s a solid gun and that’s its greatest asset. Helped by its robust feeling synthetic stock that actually contributes to its excellent handling characteristics. Length of pull was just over 14”, a little short for me but fine, the rubber recoil pad is superfluous apart from stability due to the lack of felt recoil. The form is typically sporter, simple yet practical with semi-low comb with nicely raked slim pistol grip area for positive hold aided by the moulded in checkering. The forend too is well formed with the same checkering and plenty long enough to get a grip with gloved hand or not but does have a little movement at its rear end.

Best of all on this model is the Max 4 Camo finish. Black synthetic is standard and cheaper but as a pure hunting tool the Max 4 is hard to beat. It gives an (almost) seamless finish to not only the stock but also the action and barrel area too. Great camo effect to stop any reflections that might spook your game and an effective imperious skin to repel the worst weather.

The gas operating system utilises a dual ported gas vents with standard metal O rings that self regulate the mechanism as to strength of cartridge used. The action is a strong alloy construction that houses the blackened bolt that locks back on the last round. The single claw extractor was reliable and we shot a lot of rounds through the 930 and other than light loads all the regular ammo were flung from the chamber with aplomb.

I had the 3-shot (shotgun) version with two in the mag and one up the spout, and a simple solid formed cartridge lifter. The action top is characteristically drilled and tapped for scope mounts use i.e. slugs or perhaps red dot sight.

The barrel is 28” and comes with three, flush-fit Accu Chokes. A simple key is supplied and removal and insertion is pretty straight forward and turns the 930 into a roost shooter to wildfowl piece in a trice.

The barrel has a full length, 10mm rib, which on a hunting gun gives a better visual key into your game in my view and is topped off with a 15mm Day-Glo red bead. Best of all are the vented ports to the top of the barrel. Eight staggered vents to each side four inches back from the muzzle are one of the reasons why the Model 930 is so smooth to shoot. It really does reduce muzzle flip.

I have always liked the Mossberg safety right up there on the back hump of the action. Easily accessible for use and equally importantly highly visible. Press forward to FIRE (red dot exposed) and reverse for SAFE and that’s that! An extra safety feature that is visual and tactile is a small plunger that protrudes down from the trigger guard when the action is cocked, so it can be seen and felt with the trigger finger. This indicates the action is cocked but not if there is a round in the chamber!

The trigger is housed traditionally for semi automatic shotgun designs as a one piece easily removed unit that pops out of the action with the removal of two cross pins. Non-adjustable as one expects it is heavy at 7.75 lbs pull weight on my scales but in the field with a pigeon flighting in on you it’s the last thing on your mind.

The pattern plates were set up at 30 yards and a selection of life size rabbit profiles were dotted about the field for a realistic shooting scenario and shot with the modified choke fitted.  Remington 70mm Shur Shot Field loads with 34 grams of No 4 gave a muzzle velocity of 1222 fps and even patterns on the plates. There was a slight left hand bias to the pattern but 92 pellets were evenly spread in the 15” inner zone.

Gamebore 70mm Clear Pigeon with 30 grams of No 6 shot a consistent 1258 fps cycled the action cleanly and gave 89 pellets in 15”. There was a definite 12 o`clock bias to the group but it proved deadly in the woods against roosting pigeons!

The Lyalvale Express Pigeon Special 65mm with 29 grams of No 6 functioned flawlessly at 1192 fps velocity and patterned its 87 pellets centrally.

Gamebore Pure Gold 65mm has a 28 gram payload of No 6 that shot at 1118 fps and again consistently centred the pellets on target and yielded 79 within the kill zone.

Rabbit targets set out in the grassy field were walked up to and engaged realistically as you spotted them. The Remington Shurshot No 4 shot hit hard and concentrated the shot in the head and thorax area.

The Clear Pigeons were great for flighting pigeons in the evening across the fields and when we ventured into the woods for a static position as they came into roost, the pattern was great when letting them fly into the top part of the pattern.

The Mossberg was very mild to shoot thanks in part to the weight but also the ported barrel system. The action - although not billed as a fast light weight bolt system - felt very quick and positive and more importantly never jammed on the loadsI tested.

It was interesting when testing the Mossberg 930 that three friends and I had several semi`s on test and three out of the four of us all wanted the Mossy when it came to shooting them!

Yes the Max-4 finish is more expensive but so what! !t’s better than plain black and more practical too. It shoots really well, absolutely no hang ups unless you put through light 2 ½ small brass cartridges. It patterned well in the tests and accounted for many pigeons both flighting and roost shooting. The extra weight is a bonus on this gun as it settles it in the shoulder and the barrel venting system did work and you could feel the reduced muzzle flip when compared to other semi`s tested. Mossberg are making good practical and still affordable shotguns that are nigh on impossible to break.