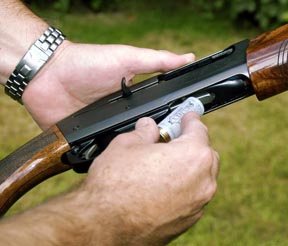 I’ve tried and tested a variety of Remington’s 1100 semi-autos over the years and found most of them to be alright. Similarly, the older models were more aesthetically pleasing, their higher grades of wood and general detailing setting them apart from the current versions. But with their new G3 Remington have more than addressed the 1100’s looks, now giving a true exhibition grade job if ever there was one.

From the moment you’re presented with the case, you can’t fail but to be impressed. None of your impact green plastic here, instead a customised black padded leatherette build with flush-fitting combination locks. Snap the latches and chromed hinges allow the lid to be held at 90°, a drop-down compartment holds a full selection of Pro-Bore multi-chokes, tools and trigger lock whilst straps hold the barrel and action in velvet-lined splendour.

But whilst the case initially holds the onlooker’s attention, even before you’ve lifted the barrel and receiver from their cosseted housings, it’s the rest of the G3’s furniture that virtually staggers. Manufactured from what Remington call ‘fancy grade’ Realwood Construction, the process bonds together two pieces of semi-fancy walnut with a carbon – fibre laminate reinforcement rounded off with one of the glossiest varnished finishes you’re ever likely to see.

The French polished effect finish is complimented by some of the softest, rolled ribbon chequering you’re ever likely to wrap your hands around. The stylised sectioning is enhanced further by gently curving lines and grooves that echo both the pistol grip and forend’s textured panels. The butt itself benefits from a satin finish with the back end rounded off with a thick, soft, Limbsaver recoil pad.

Providing a length of pull of 14 1/16” combined with a drop at comb and heel of 1 7/16” and 2 7/16” respectively, the first physical aspect of the butt that’s immediately apparent is its narrowness especially along the comb. Whilst the width of the pistol grip is ideally dimensioned to accommodate most hand sizes, the comb does seem rather pinched.

Moving onto the metalwork, the Teflon-plated receiver echoes the woodwork’s design, the Remington G3 legend subtly outlined along both sides. Similarly, the bolt when in battery, repeats the Teflon coated look this time in a slightly paler shade, a look recurring on the 5lb 8oz pull weight trigger blade, only the black trigger guard and rear mounted cross-bolt safety catch deviating from the new modernistic finishes.

The 28” barrel is finished in a deep, lustrous black along with a high, vented, 8mm wide, deep, semi circular, cross cut rib. Sighting is taken care of by a small, mid-mounted bead and a white lozenge atop the Pro-Bore, multi-choked muzzle. The G3 comes with a full set of five tubes. Back bored with lengthened forcing cones, the barrel encompasses the latest American preferred technology, the premise being that it should along with the other advances the G3 incorporates, take the new look Remington 1100 well forward into the 21st Century. I always find it a little ironic that Remington came out with what was apparently a replacement for the 1100 a few years ago – the self-regulating 11-87. Yet here we are in 2008 and the venerable 1100 is still with us…

Loading up is simplicity itself and will be familiar to any existing 1100 user. Open the bolt where it will lock rearwards and drop the first round into the ejection port. Take the second cartridge and push it against the square button at the rear of the shell lifter, which will close, chamber and lock the single lug bolt. Continue to push the round into the magazine followed by the third and you are ready to go.

Regarding Coniston SG’s Skeet layout as the ideal discipline to get used to how a shotgun feels and handles, the G3 was loaded up with Express Supreme 9’s along with the ¼ choke. However, even though the looks have changed the weight hasn’t, as this all-steel gun weighs in at 8lb 10oz; quite considerable for a 12-bore, semi-auto these days. Equally the bulk of the weight sits firmly in the leading hand; this action-heavy bias gives something of a negative effect on the G3’s ‘swingability’.

I won’t deny for one moment that this souped up 1100 doesn’t shoot, a 23/25 more than respectable at the first attempt. Likewise for any recoil-sensitive souls out there, the G3’s weight and super soft recoil pad virtually eliminates any unpleasantness. More than capable around Skeet and DTL the only two faults I found were that over an extended period of time on 50+sporting layouts; the 1100 G3 gets seriously heavy. Similarly unless you’re using top grade 28-gram loads such as my Express Supremes or World Cups it’s more than likely to stovepipe with not a hope of cycling 24 grams.

On looks alone, the G3’s appearance is proof that you can make a 45-year old design look the business! Completely up to date, it shoots like a good ‘un whilst allowing you to build up some serious upper body strength, this is the gun for you. One of the grand old timers when it comes to gas/piston semis, if you value tradition over price the G3 is the one to go for even though it’s still quite pricey compared to the opposition.