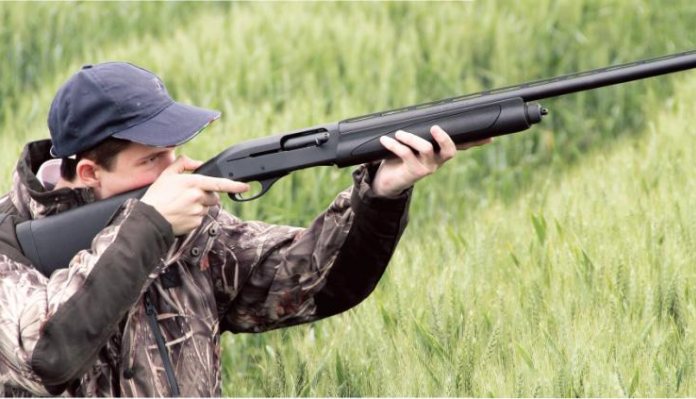 Think of the 11- 87 Sportsman 12-gauge semiautomatic shotgun as a shotgun version of the SPS Rem 700 rifle range.

All the features of the top brand but without the frills and prepared for everyday usage at a keen price, yet still having that Remington know how and reliability.

The 11-87 model comes in either a Sportsman Field model with wood stock or camo clad as the Sportsman Camo or, as here, a matt blued black synthetic type.

The gas automatic semi is deigned from the legendary 1100 series of shotguns and, as such, has stood the test of time and needs no upgrades or messing with. The 11-87 is the workhorse of the semi auto Remmy family but still provides that reliability, smooth operation and longevity of use that Remington have become renowned for.

The ‘furniture’ is a black synthetic type, made from two injection moulded halves. It’s a bit short in the length of pull department for me at 14 inches but is designed for ‘one size fits all’. It’s a rugged, no nonsense, bash it about sort of stock; so, mud, dirt and scratches are no bother to it.

There is also a lower comb of 1½-inches with a drop at the heel of 2½-inches; so, despite the short length of pull, the 11- 87 comes up very quickly and that sloped action style allows a very easy quick view down the rib, albeit a bit high for me. You also have a slight cast and the slim overall profile, although a bit skimpy in places, still provides enough grip for shooting in any stance or crouched in pigeon or duck blind.

The recoil pad is the comfortable, dimpled rubber type that has enough squish to dampen recoil and also to allow quick shouldering, then soft rubber to grip hereafter. The forend, at 11.75-inches, with a full-length finger groove/ rest for good balance from a seated or standing position. This means a better overall hold too in wet weather.

Moulded in stippling is a bit vague but is okay and, in any case, the matt semi textured nature of the stock design helps with grip, so no problems.

The 11-87 is available in either 12- or 20-gauge with barrel lengths of 26- or 28-inches in this country. I had the 28-incher that comes with the same finish as the action and has the Rem Choke system. It only comes with a modified or ½ choke fitted but any of the other choke sizes are available as spares.

There is the usual vented top rib of 7mm width with a deep grooved top to stop reflected light and having 12 equally sized vents (length wise) for the entire length of the barrel. These get gradually shallower towards the muzzle, for an upward stance. A single silver bead at the muzzle for correct eye alignment is all that is needed.

These steel barrels are chambered for 3-inch shells and have a matt blued, non-reflective surface finish. They are steel proofed as expected, so good for all 3-inch shells, making this Remmy doubly useful. This barrel comes off when the forend’s knurled retaining nut is removed (also containing a sling swivel stud) and the attached barrel ring is loosened from its piston housing, aiding in cleaning.

Remington’s action design is a classic, made from a forged piece of steel billet and uses the gas operated system for operation, instead of inertia. The gases from the fired case are syphoned off from the barrel, via a single hole drilled into the barrel at the base, half-way along. This is fed into the gas pistons system, which consists of three parts; seal, piston, piston seal and O-ring that then push the twin operating bars attached to the bolt. The magazine housing, by comparison, is brightly polished, as it is concealed and aids to the smooth running of the mechanism and is also easily cleaned. The bolt itself is again matt blued for concealment and has a small, knurled, slightly curved cocking handle that can be removed to strip the bolt down for cleaning.

There is a small extractor claw and ejector spur in the left side of the action wall, to eject the spent case clear at some force too! On the final round, the bolt is held open but can be closed by depressing the small inner button in the action cartridge lifter. It’s all you need, without mag blockers and the like.

I fed the 12-gauge loads down to 26-grams with no problems, but it becomes a lot smoother and easy going after a 50-75 rounds run in period, like all semi autos. It did not like Velocity rounds though and the longer brass head rounds certainly fed and ejected the best.

The trigger and safety are housed in the Remington, onepiece housing that is attached to the action via two cross pins that are easily driven out with a punch to clean the un-burnt powder or debris from the trigger mechanism or action. You can also attach a side mounted scope mount for red dot use if you like. The safety is a cross bolt design that blocks the movement of the trigger blade, which to be honest, is all you need and works fine.

Reliability is a big factor with any semi auto and the Remmy behaved very well, it only disliked a few cartridges, like any semi and certainly wanted 26-gram plus loads. I had a few plastic wadded 24-grams that worked well though. Also, recoil was easy on the shoulder, despite the shorter length of pull but I did notice an overall high bias to all the patterns shot; so, you need to keep that head down on the cheekpiece to view a flat rib. When I put a stock extender on, i.e. slip-on pad, it corrected this straight away for me, as I am a lanky sod!

The ½ choke, shot at 30 yards, had the best patterns with the Lyalvale Express Pigeon Power load. This was 100% reliable with its load of 29-grams of No. 6 shot with a fibre wad in a 70mm case. I had a total of 240 pellets strike the boards. with a really good. even spread of shot. with 91 inner 15-inch pellet hits and 149 outer hits to 30- inch circumference. Low recoil, reliable, slight high bias to pattern but 100% semi auto friendly.

Next up were the Game bore Velocity rounds. which are dubbed semi auto friendly, but I did have a few non-ejects; it did get better with more use though, so probably okay. Again, quite a high bias to the pattern, with a total of 221 of the 30-gram loading of No. 6 shot hitting the 30-inch pattern board. I had 57 inner hits and a dense 164 outer pattern spread. Despite the feeding, a nice pigeon load, none the less.

The NSI Master HP loads are hard hitting 70mm cartridges from Italy that have a fibre wad, but this loading had 36-grams of No. 4 shot for tough or high game.

In a double shotgun, these cartridges can kick, but in the 11-87 were a pussy cat to shoot. They were also totally reliable, that 36 grams of lead going down range. With the larger No. 4 shot size, you still get a smaller overall pellet count, here of 152 pellets with 39 inner hits and 113 outer strikes. The patterns were all centred, with good, even pellet distribution, so no game will get through.

No fuss, no frills the Remington 11-87 Sportsman is just that, a sportsman’s (or lady’s) tool for getting the job done, be it pigeons, vermin, foxes or fowl. Just load and go with the correct ammo, although, as with all semis, run it in to get the best, like a spring pistoned air rifle.

I like the no-nonsense finish and classic Remy styling that has not gone out of fashion and is pretty iconic now. In 20-gauge, this would be a great lamping rabbits and general farm gun.