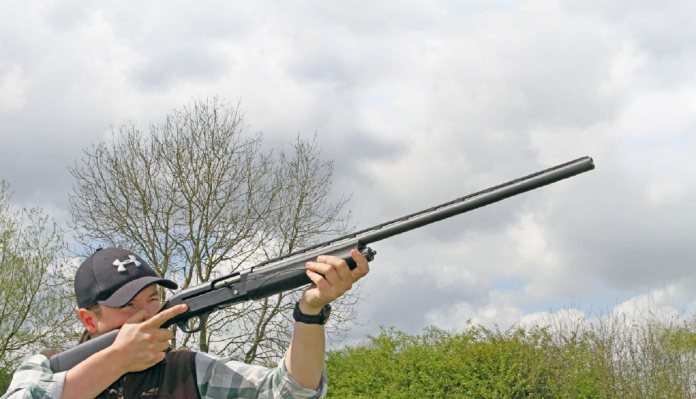 The iconic Remington 1100 semiautomatic shotgun was my first introduction to scatterguns. I had one with a Cutts Compensator attached, which made that Remmy a mild shooter on the shoulder. The 1100 series is still made, as are the pump-action 870 models, but their new V3 model seems to have been swamped by all the cheap Turkish guns on the market these days. This is a shame, as the V3 is a very capable and reliable semi that deserves serious consideration.

Remington has retained the gasoperated mechanism that has served them so well over the years, and the V3 sports their new VersaPort system. A world away from the old barrel vented method of cycling on the Rem 1100 shotgun, this new VersaPort gas venting system is designed to be as reliable with target loads as it is with the heavy magnum shells, whilst still maintaining minimal felt recoil.

The V3 comes in a choice of wood, synthetic black (on test) or synthetic camo-clad finishes. All come chambered for 3” shells and show a 28” barrel.

The heart of the V3 is actually a bit of technological wizardry that blends a compact design to ensure a wellbalanced shotgun, yet ultimately keeps things simple to maintain 100% reliability. The system does not use the long springs that travel down the stock to reciprocate the bolt mechanism. Here, Remington uses internal action springs, coiled to locate to a substructure that attaches to the underside of the barrel and not the forend. The design sees the gas system positioned closer to the action itself and not halfway or more up the barrel. Benefits include improved balance and quick bolt operation.

As a result of the design, the action is short, measuring 8.65” in length. It is manufactured from aluminium and the top has been drilled and tapped for a scope mount base if desired. The bolt locks into the barrel itself and uses a separate rotating head that shows four lugs that lock into small abutments in the chamber end. There is a single extractor claw that is quite large and an ejector rod sited on the left-hand side of the inner action wall.

A firm pull is ensured by the serrated bolt handle and the bolt holds open after the last shot. There is a magazine cut-off latch positioned just behind the mag lifter and this is operated by pushing down the lifter, then sliding the latch forward to keep the lifter in the up position, so a round can be extracted from the chamber without another being fed into the chamber.

The barrel has a matte blued finish and the action is smooth matte, so they complement each other. They work well with the stock too, so it’s all very hunter friendly.

At 28”, the barrel is a good length for a semi-auto. The muzzle shows the flush-fit Rem choke system with three choke options (¼, ½ and Full), keeping the length and balance well planted. The chokes measure 2” in length and are marked for steel proof up to ½ choke only. It is worth noting that the choke size is engraved on the choke wall and is therefore hidden from view when fitted. There are no notches to indicate the restriction of the choke fitted

The vented rib is a good 7mm wide, which means that it is clearly visible but does not obscure too much of the target in the aim. Sighting is via a steel bead halfway down the rib and a white bead at the muzzle. The shotgun is chambered for 3” shells, so any 2 ¾ to 3” shells can be used. This is pretty much standard on 12-gauges these days.

Interestingly, at the back of the chamber, there is a cradle that houses twin gas push-rods. These engage with the base of the bolt when the barrel is fitted. Also, the barrel possesses a series of ports drilled directly through it, just at the start of the forcing cone. There are eight ports in total that direct the gases from a fired cartridge towards the twin pistons on firing and it’s a clever system as it allows the V3 to operate reliably with a light target load or a heavy magnum one. With a heavy magnum 3” load, half the ports are covered when the cartridge is chambered, so just the right amount of gas is diverted. When a 2 ¾” shell is loaded, all eight gas ports are left open, allowing all the available gases to the bolt to cycle the next round. It’s a really simple and reliable system that will regulate the correct amount of gas to operate the bolt for each round.

The trigger is a single dropout unit like the other Remington shotguns but has a wider trigger guard with a smooth, wide trigger blade. The weight and pull are actually very good for a shotgun too. The safety is the usual cross-bolt button design and it is sited at the rear of the guard. It works by blocking the movement of the trigger.

The stock is a synthetic, 2-piece moulded design. The forend measures 10” in length and shows a nice profile that helps with grip, which is then further improved by the stippling that’s located on the underside. There are three vents on each side, located top/ rear of the forend, and these allow gases to escape from the firing process.

The rear stock section has a moulded-in sling swivel to match the one located on the forend retaining cap. The overall profile is quite slim and the length of pull measures just over 14”, so the Remmy handles very nicely and is a fast mounting gun in the field. I like the Supercell black recoil pad, as it grips well but also lets you shoulder the V3 without snagging on your jacket and makes the mild recoil even softer.

The V3 possesses a very quick and natural hold as the weight is perfectly balanced between the two hands, so handling is more like an over/under than a semi. Another great point is the cycling rate of the V3 is very fast, with positive cartridge loading and ejection. Only some light, 21-gram loads were not 100%. The low recoil and lack of muzzle flip are noticeable, so your eye is never that far from the game and a quick second shot is easy. You can track a bird, rabbit or those nimble squirrels and get a second or third shot off if you require.

I fitted the ½ choke and shot some pattern boards at 30 yards, which is always a nice way to see how well a shotgun actually shoots. Bio Ammo, with its #4 pellet size and 27-gram loading, shot a very healthy total of 202 pellets on the 30” board, with 138 outer strikes and 64 inner hits. These nontoxic cartridges always shoot well and the overall shot density and evenness were very good for the larger shot size.

Hull Steel Game have shot well in V3s before and this model was no exception. Its steel 32-gram loading of FE4 shot gave a total of 142 pellet strikes, which were split up into 93 outer hits and 49 inner. A good all-round steel load and very mild to shoot too.

Gamebore Clear Pigeon have a payload of 32-grams of #6 shot and this fibre wad version shot a total of 275 pellets on the boards, with 90 inner hits and the remaining 185 pellets around the periphery. Great density and no holes to this pattern - pigeons beware!

To use up some old stock, I did shoot some odds and sods, including BBs and Buckshot. Even with the heavier 38-gram loads, the V3 was easy to shoot well.

I had forgotten how clever and fast the V3’s action and unique ported chamber system are, as the whole system is reliable and good for a wide range of different shot charge weights. The price reflects the performance and this shotgun is well worth a look at.