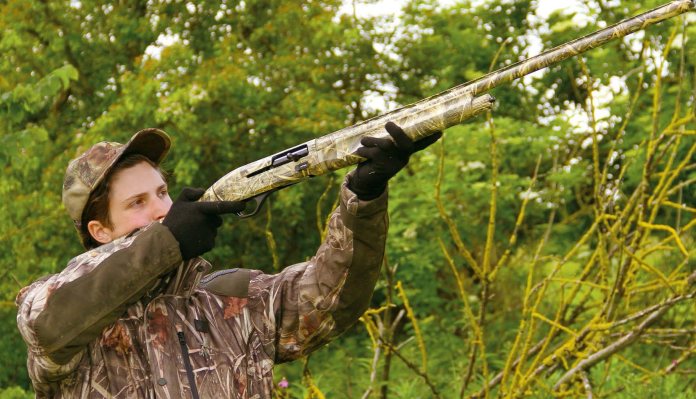 Retay Arms are imported and distributed by RUAG Ammotec UK. They are a new name to me and another Turkish arms manufacturer that produces great value for money shotguns. The guns are marketed hard in the States and have become very popular amongst all manner of shotgun shooters.

This semi-automatic version is from their Gordion range and is available in various guises such as the blued and walnut stock version, synthetic, bronze coloured action, the list goes. The model supplied is the most practical being a MAX-5 hydro dipped model.

The sporter-type, no-frills stock is all you need. In fact, it’s well designed and thought out as it feels very solid for a half-moulded polymer stock. Plus, it is foam filled so that the weight distribution is far better than some hollow-type synthetic stocks that I have tested. It won’t mind a few knocks or scratches out in the field either. There is a moulded inset sling swivel attached to the base of the butt stock and a stud on the forend cap.

There is also an adjustable shim plate system at the pistol grip to action join. This can be used to alter the cast and comb height to adjust your handling and position your eye to align straight down the barrel. You can adjust the drop at heel of 2.16” to 1.77”-1.96” or 2.36” and similarly the drop at the comb of 1.45” by @.04”. The stock is pretty much ambidextrous anyway, with a length of pull of 14.35”, so not too short and pretty much the standard on a semi-automatic shotgun.

Grip is helped by moulded in round dimples located on the pistol grip and the forend, with underhand coverage too. A bit shallow and more for looks than grip to be honest.

There is a black, plastic spacer at the butt and the ‘Comfort Pad’ recoil pad is a special foam material that absorbs recoil. It has a firm, sculpted, ergonomic, polyurethane texture but grips in the shoulder well and does not snag as you mount the gun.

The forend is long and lean, measuring just over 12” long and 1.5” wide. The top section is deeply valanced to provide good purchase for the thumb and supporting fingers. At the end of the forend is the large, camouflage thumbwheel that tightens to secure the forend to the magazine tube, it’s nice and secure.

The whole stock features the Realtree MAX-5 camouflage pattern. It is probably one of the best overall patterns as it does really break up the outline of the Retay very well.

There is a hideous, black, plastic ‘Retay’ sticker stuck to the righthand side of the stock, which most people will remove as soon as they buy this shotgun. Luckily, it comes off easily enough without harming the camouflage pattern beneath.

How a shotgun shoots down range has a lot to do with the quality and uniformity of the barrels and chokes. Retay use a precision drilled GForce barrel, which is machined to shoot comfortably and pattern well, with both lighter and heavy loads. Pattern quality, consistent distribution of shot and efficient combustion for good velocities are achieved through a combination of an extended forcing cone and optimized bore diameter. The single barrel is made from Antinit steel with a 3” chambering, is proofed for high-performance steel shot and comes with the CIP Fleur-de-leys markings. Choke wise, there are 5x flush fit, 70mm long, Marapro chokes and the sizes include S-IC-M-IM-F.

The barrel on this model is a whopping 30” long and although it handles fine, there are shorter versions available, which I like. There is a small, serrated, 8mm rib sitting low on the barrel. It’s vented by nine shallow cutouts but the sightline is very good. Sighting is via a single, red, TruGlo Fibre optic element positioned right at the muzzle end, which is all you need.

The action is an all-aluminium unit for strength and lightness and has a pleasing, almost Remington 1100 eske look to it. There are no provisions for sight attachment to the action top, just a shallow groove recess and semi faceted faces to the action sides. Again, camo-clad to match the barrel and stock, this action employs the inertia-type principle of operation.

This shotgun has a special Inertia Plus bolt that’s only available from Retay. It actively rotates the bolt head into the battery position via a spiral cut, bolt lug raceway system and keeps it locked precisely. This ensures safe and reliable cartridge manipulation when feeding and ejecting.

Here, the rotating bolt head is held tight within the barrel abutments with the two large elliptical lugs, locked on initial firing. Then, the recoil inertia rotates the bolt head, unlocks and the bolt carriage is forced back under that cartridge inertia. It is stamped Retay Inertia Plus and is designed to shoot a variety of shotgun shells. However, in testing, it did not like 24-gram loads.

The bolt is nicely blacked and the bolt head is polished, plus it’s stamped with the Fleur-de-Lys proof mark. The bolt handle is longer than average at 1.4” and takes the form of a shallow waisted cotton reel that rotates, but allows the pad of the cocking hand a good purchase to initially cock the Retay.

The last round, bolt lock-back is normal but can be released by using the black, serrated, oblong top lever that’s positioned under the ejection port. It’s so much better than a small button.

To contrast the overall camo pattern, the aluminium trigger guard is black anodised and retained by a single cross pin for ease of removal and cleaning, as semi-autos get dirty and need a regular clean. The actual trigger blade is small, polished, smooth and recessed in the back of the trigger guard, where the crossbolt safety mechanism acts on it to block its travel on the safe position.

I used the ½ choke at 30 yards and did try some 24-gram loads, as we like the light loads for vermin. However, the Gordion could not quite cycle them, but maybe after a few thousand rounds, the action would loosen up?

I also tried Hull’s Steel Game Extra load with its 32-grams of FE3 shot. It’s a great steel shot load if you need steel instead of lead. We had a really nice pattern totalling 158 hits, with 60 inner strikes and 98 outer hits within the 30” pattern board.

The more conventional Gamebore Clear Pigeon with its 30-gram load of #6 shot, totalled 201 pellets on the board, with 129 in the inner sectors and the remaining 72 pellets evenly spaced out. Great overall coverage.

Another nice pigeon or vermin load is the Lyalvale Express Pigeon Special, carrying 29-grams of #6 shot but in a 2 ½” casing. It’s always a mild shooter on the shoulder and functions well in semi auto’s and this Retay functioned fine with them. There were 58 pellets within the inner 15” sectors and 107 spread around the periphery, for a total of 165, #6 shot strikes.

A good clay load (if that’s your bag) would be NSI’s 28-gram, #7.5, Multi Target cartridges, as they consistently achieve even patterns from a variety of shotgun barrels and choke systems. On test, we had 70 inner hits and 149 outer strikes, for a total of 219, #7.5 pellets on the board. No holes for a target to slip through either.

A lot of Turkish guns look alike and there’s a lot of them about these days! I have to say that these Retay shotguns are very well made and feel solid, well machined and not at all cheap. Functionality in the tests was great, with only a few stoppages due to light loads. The actual patterns shot were very good with most of the cartridges tested. For those looking for an allround semi for pigeon, vermin, clays or a spot of wildfowling, then this Retay Gordion would fit the bill very nicely.