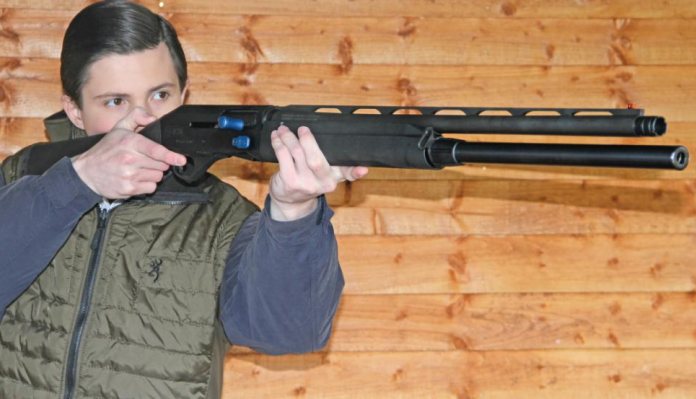 The Stoeger M3k or M3000 has all the hallmarks of a gun twice its price, but at a very affordable £595. It’s a FAC Practical Shotgun (PSG) firearm essentially but more and more keepers are using them for daily duties due to their 9 plus 1 shotshell capacity and relatively short length and overall matt blued and synthetic stock that will take daily use.

It is proudly stamped Stoeger Maryland, but also Turkey, which therein lies the price point, but as far as Turkish guns goes it’s a good one. But Stoeger Industries is a subsidiary of Benelli USA which is Beretta-owned, so lots of influence, price points and experience in this area of semi-automatic, pumpaction, side-by-side and over-and-under shotguns. Thus, covering all aspects of budget pricing and good value guns for hunting, sporting and tactical use.

Stoeger’s semi-automatic shotguns are based around the bombproof Benelli inertia-driven system devised by the Benelli engineer Bruno Civolani. The benefits of a good inertia system are that it offers a fast-cycling action and bolt, great reliability, cleaner and smoother operation without gas debris build up and, when set up correctly, works with any calibre and standard load. Inertia relies on the shotgun being in the shoulder tightly so that the action and re-action forces act in your favour to send that initial inertia force to the bolt system so that it can function 100%. Sloppy fitting on firing out of the shoulder, especially with lighter loads, will cause any semi-automatics with an inertia system to falter.

The Stoeger M3K shotgun has been around for a while now and has proved popular due to its combination of product build, reliability, and, quite frankly, cheap retail price. In fact, due to its popularity it has seen its way into many spheres of shooting, and with aftermarket companies offering bolton goodies too. Indeed, the M3K is compatible with most accessories made for the Model 3000 shotgun.

The action is an aluminium milled block that is finished in a matt black anodising with a uniform overall look. It has a recessed serrated groove to aid sighting the main rib and also is drilled and tapped for scope mounts, if you desire. A nice red dot or holo sight would be great for PSG or lamping foxes.

There is a large ejection port with bevelled sides that shows off the matt blued bolt well and has a rotating head to lock the large elliptical lugs into the barrel. Operating this bolt is made extremely easy by the oversized cotton reel-shaped bolt handle in a fetching blue anodised colour, which is a nice accent against the drab action. This is mimicked in the large blue anodised bolt release catch that pivots forward in use and is very easy to use. There is a drop down catch that also locks the bolt realise open to unload quicker, if desired.

The Stoeger M3K semiautomatic shotgun is chambered for 3-inch cartridges, so can also shoot all 2¾-inch cartridges as well, though some 2½-inch shells struggled to fire correctly.

The Stoeger M3K shotgun has a 24-inch barrel with a large semi-raised ventilated rib and seven evenly spaced vents and a smooth rib top with a width of 6mm. I prefer a thin rib to see around at what you are shooting at. You have a single red dayglo rod at the muzzle for a sight that shows up remarkably well.

The normal factory magazine holds two shots (UK spec) plus one in the chamber, so three. But this FAC version of the M3K is Stoeger has other aftermarket kit including magazine tube extensions available. Here you have a 10 capacity with nine shots in the mag and one in the chamber. This magazine sticks out an inch past the muzzle, that is usual with these extended mags, in fact there is a 12-shot available too. This one has a blued finish to it, not matt like the barrel.

The stock is nothing special, but at the same time it is all you need. A two-piece black injection moulded shell is glued together for both forend and butt stock. It’s a bit hollow sounding, but quite rigid and its matt finish is right for this type of shotgun. You also have moulded-in checkering, three panels on the forend and two on the pistol grip which are okay, but not overly proud of the stock surface. You do have a large black soft and flexible recoil pad which works well for grip, recoil reduction and gives an overall length of pull of 14.5-inches. You also have a moulded-in sling attachment point to the butt and a rotating metal sling loop between the forend and end clamp for sling fitment which would work well on this type of gun.

For the money the M3K feels very solid and not at all cheap; the bolt and action are very smooth and everything works as it should.

I forewent the usual pattern board test and set about shooting a variety of differing lengths, load weights and shot sizes to see how they functioned for reliability through the action.

You are probably going to use buckshot, heavier loads and slug with this gun, but as I said vermin loads or pigeon loads worked remarkably well also. Everything from 28-gram loads upwards from Grand Prix, Clear Pigeon, High Pheasant or Zenith, as well as some Titanium Strike and some odds and ends I had over. The only problems I had was when a smaller size shell preceded a larger one and I had a couple of not total ejections. So, my advice is stick to 2¾-inch cartridges with 28-grams and above. Also firing out of the shoulder caused some stoppages, as mentioned earlier, as inertia systems need something to push against that’s the same for all of these types of gun.

The larger pellet sizes like the Eley Alphamax Plus 3-inch and No 3 shot deliver a 46-gram load with a very good pattern and deadly on foxes even with the ½ choke at sensible ranges. BBs are popular and loads from the Alphamax with 36-grams or the Game Bore Buffalo special load 2¾- inch BB Shot cartridges can achieve over 90 pellet strikes and, being a larger pellet size, more energy per hit. SG loads have large pellets of 8.4mm diameter and so have a huge striking energy – okay for close range steel plates but out in the field, unless you are close, foxes have a chance of getting away. The Game Bore Buffalo special load 2¾- inch SG functioned very well without undue recoil either.

Fed a correct diet and held correctly, like all inertia systems, the M3K is a very creditable performer. I can see the appeal to PSG shooters, as it is fine as is or can be customised. Also, for keepers who want a high capacity gun for vermin use and don’t care about knocking it about, the M3K is capable of delivering as many rounds as you see fit. Good value for money and a nice set of useable features.