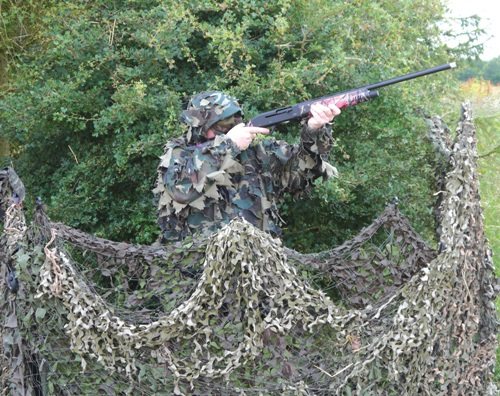 In the August issue of the mag I tested the new Hatsan Escort Magnum Muddy Girl shotgun. As a company Hatsan needs little introduction as it has been imported by Edgar Brothers for a long time now. Their rep is good and I know a lot of shooters who have a 12-bore version as their field gun and are well pleased with both price and performance. Feedback suggests that you buy the Magnum version even if you never shoot that power ammo as it will last longer.

The Muddy Girl name goes to the pink/purple, photo-realistic camo pattern with Hatsan firmly aiming it at the female demographic. I say this as looks aside it’s based on a smaller action, which results in a lighter and handier gun with few vices, recoil not being one of them! The length of pull (LOP) at 12.75” is also shorter to suit a woman’s smaller frame. Sensibly Hatsan include a big LOP extension pad, which takes the gun up to 14” to fit longer armed gorillas like me. I tried it without the extension and smacked myself in the nose with my thumb – DOH…

So impressed with the gun was I that I got one for my daughter Chloe, who is showing an interest in rifle shooting and I thought well how about some shotgunning too? We will soon be starting some clay pigeon with an instructor, which brings me on to the story!

As I have said before I’m not primarily a shotgunner in terms of bird shooting. I have done a bit here and there with mixed success and enjoyed myself, but my serious passion and one that doubtless makes me only shoot hi-cap pumps and autos was Practical Shotgun. However, I don’t do that any more and I have found my interest growing in terms of game shooting and clays.

With the fact I really like the Muddy Girl with its longest LOP set and also I have never used a 20-bore in anger my good friend Andrew (2-Dogs) Johnson who from time to time takes me bird shooting suggested we rectify that. Last year we did some good rook clearance with my Browning Maxus 12-bore and I shot surprisingly well. He gave the Hatsan a once over and being a fan of smaller calibres pronounced it a good piece of kit and suggested we go pigeon shooting and see how it performed.

Typically the day he picked was one of the hottest of the year so far, though he had seen plenty of birds the morning before. We set up and it was then the wind died down to nothing. Andrew explained that the Pigeons like the wind as they tend to ride it to aid observation, so we might not be that lucky!

I was wearing the top half of a Russian Leshy (ghillie-type suit) with hood and face veil and I was sweating my cobs off already. We put out some shell decoys (deeks) and snuggled in behind the camo nets on the corner of a wood looking across a field. Being unsure of the 20 I also brought along my trusty Browning Maxus 12-bore.

The evening started slowly with a few birds flying well out of range for about 30 minutes, then as often happens a single pigeon rocketed over the hide; certainly surprising me. I managed to bag two in that fashion with just a few misses. I do find with shotgunning I shoot better when I don’t think too much about what I do, though I also admit that if I don’t apply myself then my gun mount and keeping the gun moving through the process starts to get a bit woolly!

With two birds down and not a lot in sight Andrew popped out of the hide and set the brace up on poles to give the impression from above of them coming down to land and feed. He also suggested that as I had bought the 20 along I should use it! I was a bit reluctant thinking in my ignorance that it would not have the killing power of a 12, but it could not sit there gathering dust could it?

I loaded it up with some 28-gram #5 shells he had brought along for me and waited. As before birds were few in number but they came in in dribs and drabs, though not in the amounts Andrew had hoped for. The change from the larger and heavier 12-bore took a bit of getting used to and Andrew was coaching me as I took a bead on the pigeons coming in.

Much like the doves I had shot in Burkina Faso and Morocco, pigeons which I assume are related are fast and initially I was not giving them enough lead plus committing my cardinal sin of stopping the gun as I shot. However, I got my first one with the Hatsan and it started coming together. First impressions are of a light and very handy gun and second that a 20-bore load in the right place is equally as effective as a heavier charge of 12-bore pellets!

Andrew said that though a 20 can be more demanding in terms of placing the pattern correctly in relation to the bird, they pay dividends when it comes to shooting a 12, as they tend to make you shoot tighter, which with a 12’s heavier load should get better results! So logically you have the potential to shoot better! He does the majority of his game shooting with a 28-bore over & under these days and is very good with it!

Andrew is an excellent shot and knows how the birds fly and react, so this on the spot coaching was of great help. A good example one pigeon came towards the hide from the front and he said wait, wait, wait as it will flare, open its wings to stop in the air and that’s; the best time to get them. Bang, I got him as he hung near motionless!

I missed more than I hit, which really shows I do not do enough shotgunning Andrew suggested a one-to-one training session with international coach Philip Thorrold (Philip Thorrold Shooting Academy) based in Norfolk just up the road. He also offers simulated game days.

BACK TO THE PLOT!

Shooting a lot gives a true insight into not only the guns ability but the equally important mechanics; especially on a repeater. From the Muddy Girl’s perspective it proved 100% reliable, recoil-friendly and seriously light, handy and pointable. OK I’m a big guy and my 12-bore Maxus is very well behaved, but the 20 was a bit like firing a .22 Long Rifle compared to say a 223 Remington in comparison to the recoil of my 12-gauge.

Two aspects of the build came across though, first the shell lifter release catch, which allows you to unlock it to load the magazine was quite stiff in operation. Something I would guess will smooth up with more use. Second the multi-chokes get loose quickly under recoil, I found I was automatically checking their tightness after every few shots. As I said the Hatsan is new and I have no doubt that the build-up of firing reside in the choke threads will cure that too.

The extra LOP offered by the butt extension pad tailored the gun to my big frame well enough and by the end of my session, which saw the Hatsan claim six nice wood pigeons I had fallen in love with this diminutive performer. OK I admit I missed more than I hit, but that’s life and overall I had an enjoyable and instructive evening shooting with a super little semi-auto!