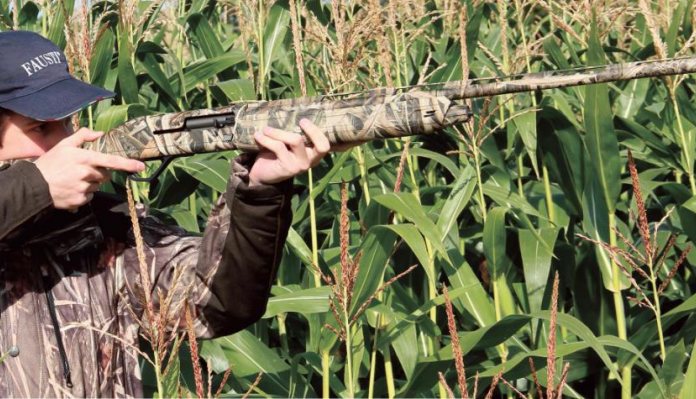 The SX4 has already established itself as a worthy successor to Winchester’s old SX3 model, which I thought was perfect as it was, to be honest.

Progress goes on and now these SX4 models are made in Portugal by Browning Viana.

I have tested the SX4 in wood stocked trim before, but now Browning have a limited edition run of camo-clad or MOSGB pattern and in the smaller 20-gauge. This is because 20-gauge is having a real revival, as with other smaller calibres, as they kick less than a 12g and allow a fast second shot, especially in a semi-auto like this SX4. It is a really nice looking and super-fast handling little semi, and I love the fact that its 20g and camo-clad as, though the name Waterfowl would indicate use on the foreshore, it will really appeal to pigeon shooters and rough shooters too.

The SX4 usually comes with a choice of 26- or 28-inch lengths; in this model you only had 28-inch option. No problems as this is what most people would choose anyway, and it keeps the weight down to 3kg and still allows good handling and swing.

I like the smaller profile of the barrel as the 21mm diameter matches the look and stature of this SX4 Waterfowl very well. You have a 6mm slim rib system that is ideal for fast target acquisition, not crowding the view and to see the game you track. It has a serrated surface that is also camo-clad and a single red Tru-Glo bead at the muzzle. You also have five vents of equal length with a slanted profile along the barrel length and so decreasing height towards the muzzle. The 28-inch barrel is chambered for 3-inch magnums and is steel proof with the Fleur de Lys proof mark, so good for anything. As usual the Browning Back Bored technology used by Winchester has chrome-lined chambers and bore do actually make a difference affording maximum performance and protection to the bores surface. This back boring gives the shot column room so as not to cause excessive compression of the individual shot pellets to produce even patterns that are denser than normal barrels.

This model came with the Invector Plus multi choke system fitting flush to the muzzles and supplied with ¼, ½ and ¾ choke choice. The Invector choke design works in unison with the back bored barrels to ensure less pellet deformation and tighter patterns down range providing consistency and uniformity to the shot patterns with fewer holes.

Winchester also use a newer gas bleed system from the barrel to gas porting system to cycle the action. The Active valve system ensures reliability with a wide range of shot charges combined with a superfast and slick action that also produces less felt recoil. It allows lighter loads as well as full magnum loads to be used in unison and mixed and matched together. The valve adjusts to the pressure from each load to transmit the exact amount of force to the guide rails and operate the action in an instant without any delay.

Overall design is similar to the older SX3 action, which I like, and still has the useful twin dove tail scope mounting mounts that I do use for buck shot and sabot slugs but that another article entirely. The action is made from aluminium, so again adding to the lightness or decreasing the weight and allowing a good weatherproof design.

The bolt has a two-part construction with a separate head that locks the action and has a large single claw extractor and an internal wall mounted ejection spur. These have a smooth greyed Teflon finish that did not collect unburnt powder and the operating handle was a good size at 1.25-inches and deeply serrated for grip. The cartridge lifter is nickel Teflon coated to reduce friction and also stops corrosion when the SX4 is left in the wet grass.

Enlarging the trigger guard has enough space forward of the trigger blade and inset behind this is the safety catch, a small square serrated push button. Left is fire, right is safe. The bolt release is a smooth metal button below the bolt and releases the bolt when it is held captive open on the last round. The trigger blade itself is small and smooth and quite a decent 3.95lbs pull for a shotgun.

Finish on this Waterfowl version is the camo-clad option of MOSGB which I much prefer to the standard walnut finished version. Being totally clad, barrel, action stock and all, it unifies the SX4 and means just shoot it and forget about the weather and scratches. The MOSGB stands for Mossy Oak Shadow Grass Blades which is a very effective camo pattern for almost anywhere as it has enough light and dark shading and photorealistic foliage to blend in very well to its environment.

The forend has a good length for a hold at any position which is handy for hide use or odd angles with a stepped top ridge halfway down with scalloped finger grooves so cold or wet hands still have a firm grip. You have a further two panelled chequered area which are actually ribbed to give a unique hold and look. The underside is ribbed and overall plenty of grip and hand positioning possible. The rear butt section has a pistol grip ribbing that wraps around the front of the grip, but no palm swell. It’s quite slim and so any hand size is accommodated as are left-handed shooters too.

Inflex technology with a honeycomb central section to the recoil pad that, under recoil, deflects the cheekpiece away from the cheek means very light recoil with this 20g and a fast second or third shot. The pad also has a broad footprint and so dissipates recoil more.

First up with any new semiautomatic, regardless of maker, you need to run a few rounds through it to get it eased up. It just gets all the gas and piston areas and new packing grease burnt off and functioning spot on. I tested loads from 21-grain Pro Twentys to 30-gram Eley VIPs.

The SX4 functioned down to 25-gram Lyalvale Express Specials but did not cycle the Hull Pro twenty 24-grams or 21-grams. The 24-grams ejected two from five shots.

The Lyalvale Express 25-gram loads shot very well with its No 5 shot loading. I had on the pattern boards at 30-yards with the ½ choke fitted a total of 178 pellet strikes distributed with 55 inner hits and the remaining 123 pellets around the 30-inches. Well spread and even, a nice load.

Next up were the highperforming Hull High Pheasants Extreme. Here the action cycled superbly and quick too. This load had a payload of 30-grams of No 5 shot XTRM hard shot with a fibre wad and 70mm case.

These loads were pokey and shot high on the pattern boards for me. I had a total of 160 No 5 pellet hits with 49 inner and 111 outer strikes. Dense pattern but in this SX4 aim with game floating right above the bead.

Another nice load was the Eley VIP Game with its 30-gram No 6-shot load. Very good function and well centred patterns this time. There were 85 inner hits all dense and evenly spread with 113 pellets spread around the circumference. Really nice reliable load and good pattern`s from the SX4 Waterfowl.

This SX4 in camo and synthetic trim is the best option in the range and is especially good in 20-gauge. It’s a really nice handling and reliable little do anything semi-automatic at a keen price. Feed it right and its very fast cycling and smooth operating and being a 20-gauge, the recoil is very light and you do have a better view of the second shot making it a very effective vermin tool.