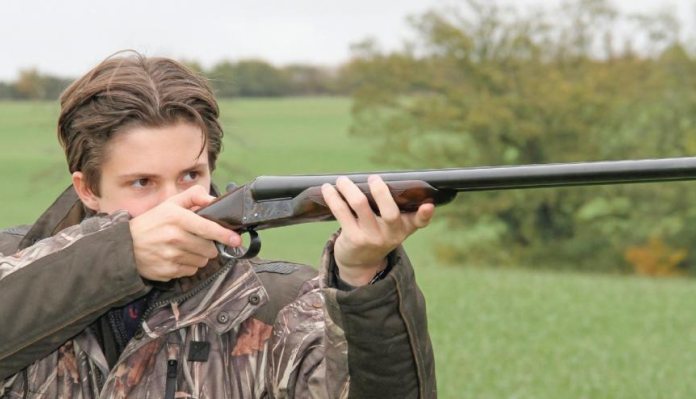 Mention the name AYA Yeoman to shooters of my generation and watch their eyes widen and then chuckle. Its one of those shotguns that was the workhorse of practically all shooting families or some one knew someone who had one. Why? It’s because AYA were a very well-respected company, producing side by side shotguns from Spain and the Yeoman was their entry level gun. This meant that, like myself, you could buy a real AYA and pretend it was a No 2 grade for only £38!

It is a testament to the build quality today that so many Yeomans are still going strong, but you have to check on the overall integrity of each gun, as some were just a workhorse and have had a hard life administered to their insides and out.

I picked up this AYA Yeoman from Norman Clarks gunsmiths, from a retired gentleman who had this, a Webley Mod 700 and Webley 410 bolt action, all of them classics in their own right. to Britain in the late fifties; so, a long-standing favourite with shooters here, hence the number and popularity.

The Yeoman is a non-ejector S/S gun with its bigger brother, the No. 4, being an ejector; the No 1 and No 2 were sidelocks, whilst the No. 3 and 4 and Yeoman were all box locks.

The standard wood is plain walnut and usually has a really nice, dark stained colour to it. This, over the years, has deepened and become, with the oil finish, a solid, rich patina that is not only nice to look at but also really quite weather resistant too. You own a Yeoman because you want to shoot it and so are not worried about scratching it or getting a few dents and dings in the woodwork or even a bit of wear to the blued surfaces. This Yeoman seemed very well cosseted, with nearly all its original colour case hardening remaining.

The stock configuration is your typical English side-by-side format, with very slender forend wood and straight hand grip configuration. That’s on your normal Yeoman; this magnum version has a slightly more robust stock design, which I actually like and suits the magnum nature of this gun. This Yeoman has a full beavertail type forend, so your grip does not mean your fingers are wrapped around the barrels, as in the standard version. The butt stock has the fuller pistol grip arrangement that is more user-friendly but does take away from the original Yeoman lines with straight grip. The chequering is not bad either to the forend and pistol grip, with good coverage and does provide grip and is not just decorative, as so many new guns are. Length of pull here is 14.75-inches to the first trigger and 13.75-inches to the rear trigger.

You still get only a thin black plastic recoil pad that you do feel with this magnum version!

The barrels are substantially made with thick original wall thicknesses again contributing to the longevity of these guns. They are soldered together with a concave bottom rib and the top rib is also very substantial. It is nearly 10mm at the action end, tapering to 7mm at the muzzle with serrated finish and a single gold bead for alignment.

Fixed chokes are the norm here and these were bored tight at ¾ and full, you can tell this by removing the forend and on the barrels, just in front of the locking lumps, are stamped a series of stars. This has two stars for the right barrel, thus ¾ choke and one star for the left barrel i.e. full choke. These are bored 3-inch magnum and proofed to 1200kg, so good for most 12-gauge loads.

The action is a typical box lock design of an Anson and Deeley format, made to look very English in its form. It has a plain appearance, but it suits the Yeoman, as the sides have no engraving, except the hinge pin is striated for effect. However, there is a nice overall colour case hardened surface that instantly gives that traditional feel and here is in very good condition. As said, it is a nonejector system, keeping the costs down but you do get an automatic safety on this model. No barrel selector here, as there are double triggers; the right-hand barrel with the front trigger, ¾ choke and rear trigger for left barrel and full choke.

The serial number dates this model to 1982 and, for its age, is still tight with plenty of life left in it.

Recoil and swing is different with any side by side and so needs to be practiced a bit compared to an over and under shotgun. Personally, I would use lighter loads of 28-grams or less and enjoy this Yeoman as a rough walk up gun with 21- to 24-grams of No. 6s with those tightly choked barrels, otherwise close game will be shredded!

You can pick up a Yeoman for very little money these days but take your time over your choice as there are plenty to choose from. The AYA Yeoman instantly takes you back to a more sedate way of life and that traditional side by side format makes you think about your shooting technique more keenly. Threeinch magnum version like this are rare but a non-ejector 12g is still a very good bet and will no doubt provide a nostalgic shooting foray. Second-hand guns go for as little as £150, or less if there are cracks or splits to the stock; however, really nice condition or unusual magnum wildfowl versions go for up to £300, which is still very good value for money, considering the quality of materials used.

We could all find a place for a Yeoman in our gun cabinet.