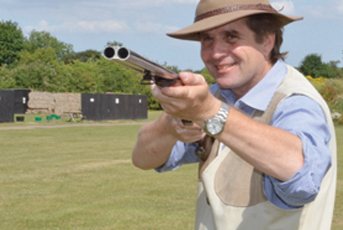 Baikal guns have a reputation rather like AK47s.Indestructible and something you can bang in nails with when you get bored of shooting with them. Well, perhaps I am being a bit too harsh because so many people started their shooting careers with Baikals. Tens of thousands of them are still in use in the UK and I see them everywhere when I travel in Eastern Europe and the Balkans to hunt (where the beaters and hunting professionals all seem to carry them - often with hand carved stocks).

In my youth, single barrel Baikals were popular as starter guns because they were so cheap. Who ever hears of people buying new single barrel shotguns now, though? We’re all spoilt and just don’t realise how lucky we are. The norm is to start with a gun costing £500-1000 (though I note exceptions in both directions). We are, most of us at least, much better off than we were (materially at least and new austerity Britain not withstanding). When I was a kid in the 1960s, most people started with a single barrel (Baikal, BSA, AyA Cosmos, Greener GP or, perhaps, a cheap American gun), before moving up to a second-hand side by side non-ejector (and, we usually bought cartridges in 10s not 25s. A 250 slab would have been an impossible luxury, 1000 cartridges unheard of unless it was for an estate).

As ever, I stray off the point. So, let’s focus on our test Baikal. It is, unusually a 20 bore side by side, and came through the kind offices of David Thompson at York Guns. It has an RRP of £574 (the over and under version in 20 or 28 bore would be £629). This is not a lot of dosh by modern standards and the gun must therefore be judged at its price point. You cannot fairly compare it with something costing two or three times as much. I might add that I like dealing with York Guns, meantime, they always go out of their way to help and it is much appreciated by me and this magazine. They have a growing product portfolio too which also includes Chapuis and Mossberg shotguns. I have not tested the latter for a long time though I have considerable experience of them and still own a 12 bore semi-auto (expect to see one in these pages soon). We have looked at Chapuis, however, and they impressed with gallic style and ingenuity.

O.K. back to Baikals; they may not be quite as popular as they once were, as noted, but as work horses, they still merit serious attention. Their reputation for reliability as working guns is outstanding (and it is easy to forget that some still buy guns as tools).

First impressions of the test gun? Let’s be frank, it is a cheaper model without any bells and whistles whatsoever (save for some rather narrow sling swivels for which you might be hard pressed to find a sling these days). The finish is basic, but not unattractive. The action (which is asymmetrically and quite modernistically scalloped to the rear) has some simple open scroll engraving and equally simple fences. There are panels machined into the bar to break up the lines of the action walls a bit.

The blacking on barrels (and the action which is blacked too) is competent. The general styling is a bit agricultural (as it always has been on Baikals) with a rather angular, short, stock. “It is what it is”, as David noted to me. Mind you, I might just mention that I used to know an eccentric character who had a 12 bore customised Baikal side by side. It was well blinged-up with a communist theme for devilment – the stock sprayed high gloss red, a Soviet Star on one side and a hammer and sickle on the other! He used it while wearing a diamond encrusted gold Rolex, having had his lottery numbers come up.

The test Baikal is quite heavy for a 20, hitting the scales at 7 pounds 3 ounces even with short, 26” barrels. It is a game gun with a tapered, slightly concave rib (with an engine turned top surface). This is a pretty good design. There are multi-chokes, a single trigger with a selector above the blade. Overall, the gun is plain, but not quite as grim as Omsk mid winter. On cursory inspection, this modern Baikal – though it would not win a concours elegance – seems just a little better than some of the earlier ones. A few glitches apart, some effort has gone into quality control. It looks and feels solid, but not ungainly. The angular styling is typical of the make (though a makeover is overdue in this department).

The stock wood has a little figure and looks like walnut of reasonable quality. It is quite well finished in what looks like oil, though I was not especially fond of the grip shape – which is small and square in cross-section making a secure grip more difficult (all the more because of the lack of depth). The comb is very low and the stock short (sub 14” even with its vented pad). I quite liked the little beaver-tail forend, but it would be better without the schnabel lip which makes it hard to extend the hand (and on a side by side I like a front grip which is ‘half wood and half metal’. The Deeley pattern release catch was good.

The hammer forged barrels are monobloc and have traditional Purdey double lumps beneath their flats. They have 76mm (3” chambers). The bore dimension at proof is 15.7mm right and left a little tight, but probably better in a gun which may have been designed to see service in very cold conditions where more open bore barrels can lead to pressure issues (especially with inferior cartridges). The forcing cones are short, as they always have been in Russian guns. The combination of tightish bores and shortish cones would make the gun suitable for use in cold conditions, however, but might also increase felt recoil in my experience. [I have found, meanwhile, that fibre wadded cartridges using flake type powders can fail to perform in very cold weather if bores are open and forcing cones are long.].

Presentation of the barrels is quite good considering the price. They are well put together, reasonably polished and blued. If you look at them carefully there are some irregularities to the striking up (as on most Baikals) but nothing to be concerned about. They are well designed and soundly engineered though with good joints – disguised with a little engraving – between tubes and monobloc (better than on some cheaper Italian guns).

The boxlock action is Anson and Deeley inspired (though I did not remove the bolted stock to see what sort of springs are inside). There is a full width hinge pin as noted. The top-lever thumb-piece is quite small as it the safety which is, nevertheless, positive in action and automatic. The trigger pulls have a bit of creep and are heavy. I have to say this was a bit of a shame, I find it hard to adjust to heavy pulls (I usually use the first joint of the trigger finger instead of the pad to give a bit more leverage).

Returning to the stock, the finish is quite nice – it looks like oil as discussed, though I suspect it isn’t at the price. I may be wrong. The grain is well filled and the subdued, satin, surface finish is what most of us want. The chequering panels are a bit sparse and Spartan yet adequate but the quality of chequering itself is quite good. The comb is quite well shaped with a little taper to it. The short stock and comb dimensions of 1 ¾ at the nose and 2 1/2” at heel do not do much for the fit of the gun. It would be transformed with 1 1/2” and 2” as shelf measurements, and a standard stock length of 14 3/4”. There is a little bit of cast for a right-hander.

The butt is finished off with a black pad which though ventilated is inoffensive and practical. My only other comment is that there is very little difference between the length measurements at the centre and at the heel of the pad reference the middle of the trigger, the stock could do with more of a ‘bump’ to prevent slipping in the shoulder.

I shot the gun, rather surprisingly, at the wonderful Holland & Holland shooting ground at Ducks Hill. The boys there are always up for a bit of sport, and, indeed, take a real interest in some of the curious things I bring down there to play with. Chris Bird, who I rate as one of the best instructor gunfitters in the country, and I shot the Baikal gun together with another - a little 28 bore over and under which surprised us both with its handling and shooting qualities.

The test gun did not shoot quite as well as the over and under, for two main reasons: the stock dimensions and the fact that the trigger pulls was exceptionally heavy as noted with quite a lot of creep. The basic integrity of manufacture was there though, and I need hardly add, that it was perfectly reliable (Baikals nearly always are).

The pointing qualities of the test gun were not aided by the short barrels and were certainly not as good as the OU tested in parallel to it. But, one has to take into account that this is a gun which you will probably buy new for just over five hundred quid. The most basic Beretta over and under is nearly three times that. One must judge the gun at its price as mentioned at the start. At the cost, this gun offers good value. I still think the design could be improved with minimal increased manufacturing cost (change the stock length and lift it a bit, but 10 minutes more gunsmithing into trigger regulation – something, of course, which you could get done post manufacture). Meantime, my frank steer would be to go for the 12 bore version, or one of the over and unders (the small bores – the one we tested was a 28 – are something new which are worth looking at).

My thanks to David Thompson of York Guns, Chris Bird and the Holland & Holland Shooting Ground, for their help in this test. GM