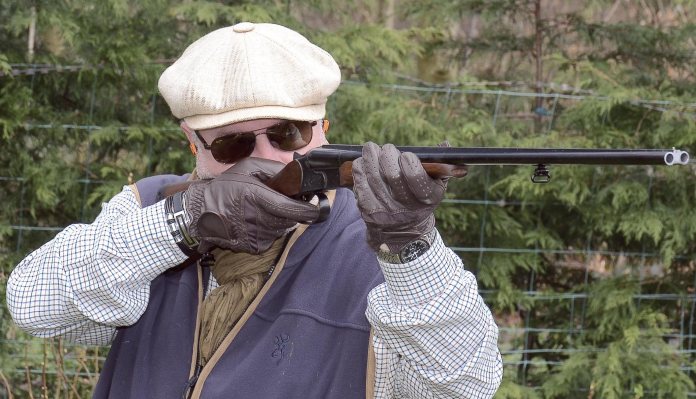 When I was a lad all those years ago, if you were starting out as a shooter it was more than likely that your first shotgun would be a 410, and in all probability a Baikal. There wasn’t a farmer, farmer’s lad or lurcher man who didn’t have one. And before you comment that farmer’s daughters also used them, way back then the number of women shooters was significantly less than it is today.

It also tended to be the case that the junior shot moved up to a 12g as soon as possible which meant most Baikals endured numerous, often less than careful owners. The thing was, and still is today, that no matter how unkind you are to a Baikal, especially a 410, it never gives up. Built like a T32 tank, they weigh in like a 10 bore, have enough surplus metal to build a Lada or lever a 4x4 out of a ditch.

Blessed with another infeasible name, once you’ve either been able to remember or fortunate enough to forget the MP- 43E-1C designation, Baikal’s latest 410 personifies the terms ‘over constructed’ and ‘unfailing hunting companion’. Part of Sportsman GC’s everexpanding portfolio of these Russian smoothbores, this side-by-side 410 is definitely a shotgun of many characters. The instant you pick it up not only can you see but you can feel the DNA of other guns between your hands.

It might be basic, but the oiled woodwork has some of the straightest grain you’ll ever see. The basic profile semipistol grip game stock is fitted with a substantial honeycomb rubber recoil pad, the rear sling swivel screwed in to a depth you won’t get it back out. The grip is slender with two small panels of checkering, whilst the fit of the stock head to the rear of the action is tight and even. Move forward and there you have a distinctly Americanstyle Beaver forend, this wide hand filling section of wood held tight by an Anson latch.

One word of note, and something I don’t think I’ve ever actually said before, but the top edges are so precise they’re actually quite sharp. Given that this 410 is such a basic gun, my advice is to take some sandpaper and gently round them off before you reapply some oil, small areas of the checkering having already dodged the factory’s initial application, a goodly dollop of a good oil will lift all the woodwork.

Taking into account the design of the forend, it’s the monobloc barrels that at times look at odds with the Baikal’s bore and intentions. Gloss black and an exact 26 inches in length with three inch chambers and fixed full and ¾ chokes, it’s the 7-12mm concaved solid high rib that gives this 410 a distinctly American look. More or less identical to an American sideby- side live pigeon gun, the only difference being they are about two inches shorter and have that forward sling swivel. Apart from these small dissimilarities, these tubes are seriously substantial, confirmed by the two big lumps that lock them into the action.

Unusual for a Baikal, the basic black boxlock action has had two small scrolls engraved either side along with a pair of minute stippled panels on the fences with scallops around the stock head. A huge black triggerguard surrounds the silvered blade, the barrel order selector a small quadrant at the top of the open curved protrusion. Up above a short top-lever juts out over the top-tang just ahead of the small, automatic safety that in turn slides up and over an exposed ball bearing. Emitting a loud, very audible click when disengaged, you’ll need to make sure you deploy it a fraction of a second before you’re about to pull the trigger, otherwise the wildlife will have vanished.

It’s when you look at the dimensions and feel the Baikal that makes you think of something else. Just 42 inches in length the gun still weighs in at 7lbs 8oz with a balance point about an inch in front of the hinges. Drops at comb and heel are 1½ inches and 2¼ inches with a length of pull measuring 13 11/16 inches to the average breaking weight trigger of 8lbs 6oz. Yes it’s heavy, but when you’re shooting with the Baikal it tends not to be a problem, your attention directed elsewhere.

It’s when you hold and swing the Baikal 410 that, besides the live pigeon gun effects, you start to feel that this Russian smoothbore could well have started life as something else. Everything about the gun suggests that in an earlier life it could well have been a smaller calibre double-rifle, the weight, handling and balance, the way the gun comes up to the shoulder and the sight picture along the rib and over the small silvered bead all shout ‘rifle’!

No matter how you evaluate the Baikal 410 it was never intended and will never be a clay breaker. Instead it’s an out and out hunting weapon and vermin eliminator. Loading up with Eley Trap 410 and Eley Long cartridges, two outings in and around a few of Huntroyde’s woodlands and copses allowed the Baikal to demonstrate its unerring abilities. Numerous grey squirrels will no longer be gathering nuts, whilst this 410’s capacity to pull down high-flying crows and magpies is almost unsurpassed.

Besides being one of the few shotguns I’d actually fit with a sling, what at first seems to be an overly heavy 410 soon proves as to why. The smoothness of the swing is excellent whilst the tight chokes throw a well-defined, even pattern allowing for the precise placement of the shot. Exhibiting the exact same sight picture time and time again, whilst switching the barrel order to the tighter restriction first, if the full choke barrel doesn’t fails to take out the target, the slightly wider barrel will most definitely do the job.

Sat on branches, up in the air or scuttling along the ground, this Baikal kills them all to a degree I actually looked forward to using it. Granted the ejectors, whilst strong, aren’t especially welltimed, the right chamber clearing the spent case well in advance of that on the left, it’s a small failing that you can live with.

Exhibiting everything that’s made a Baikal exactly what it is from the basic build, unsophisticated looks and heavy duty feel, it’s the £399.99 price tag that suddenly makes the Russian 410 desirable. Add in exactly what it can do, the ersatz American looks, the double-rifle feel and ability to comfortably dispense the heaviest 410 loads you can find and the gun you used to make jokes about quickly gets serious.

I actually like Baikals since they remain one of the few genuinely honest shotguns still on the market. Along with their UK importers Sportsman GC, they don’t make any claims to being this or that, or having the latest ‘must have’ gizmo that’ll make you shoot better. Instead they maintain their reputation for building shotguns that are incredibly rugged, do what they’re meant to at a price virtually anyone can afford. This MP-43E-1C 410 is a prime example as to why these Russian shotguns still have their dedicated followers.