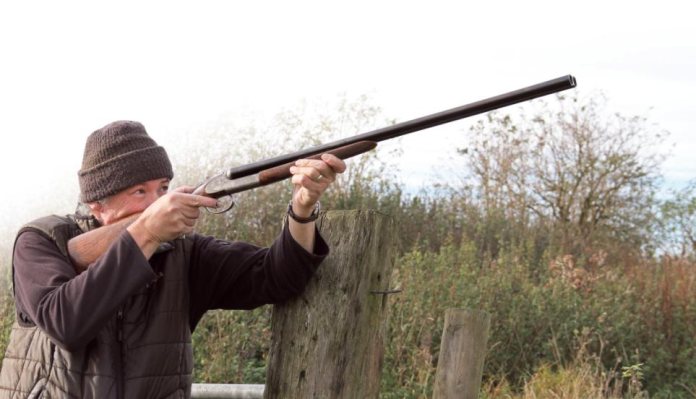 I have shot several Chapuis double rifles before and have always been impressed, not only with the accuracy but the incredible build quality. You don’t instantly think of France as a double rifle or shotgun manufacturer, but as with us Brits, they love their game shooting and also driven hunts and they make guns that suit that style of hunting.

Chapuis are probably the best kept secret out there, when others are buying your run-of-the-mill established shotgun names and looking like clones on the fields, a Chapuis shooter has the knowledge that they are shooting an almost bespoke gun, with far more individual styling and hence pride of ownership.

Here on test is a beautiful traditional side-by-side 12-gauge, with a lovely rounded action and side plates wearing some amazing walnut furniture. It’s not all traditional though, the barrels are steel proofed, you have a typically unique Chapuis locking and ejection system and the manual safety and nonselective barrel firings are there to make your shooting experience much smoother and quicker.

It’s difficult to know where to start to be honest, as all the parts of this Artisan are a delight. The action particularly is a work of art, befitting the name and has a very traditional rounded action. This feels and looks good and this is further enhanced by engraving that seems to flow with the elegant lines. In fact, side plates are added to allow more adornment and as with the trigger plate and guard, the whole metal finish is outstanding.

Chapuis use up-to-date CNC machining processes and handfitting where necessary and you can see the care taken in this regard. As I mentioned, the action has a non-selective barrel system, which I like and the fact that the barrels are multi choked any way, poses no problems.

The top lever again is profusely engraved and has a lovely gliding action that releases the barrel locking bar from the bottom of the action front below the firing pin assembly. This locking bar directly recesses into a very Chapuis-esque barrel locking or lump system. In fact, it’s not a lump system at all but an all-in-one rectangular steel housing that locks and contains the ejector springs, in itself; one massive ‘lump’. It’s most unusual but works flawlessly and is famed for its reliability, especially on their double rifles; when dangerous game is charging you, it’s very reassuring!

This design allows ejector springs in this under barrel mechanism and tricks you into thinking it’s a self-opener also. Ejection is very well-timed and prompt, so no complaints here.

The front edge of the lump is the recessed surfaces for attachment to the cross pin, sited in the action body that secures the hinging system. It cannot be described as a true lump or Monobloc system, and in fact, the marriage of the barrels is both strong and very functional.

The barrels, too, are superbly appointed, with lovely deep rich blue/blacking to their finish. They are 30-inches in length, which is sensible these days. The chokes come in a wallet, of which there is cylinder, quarter, half, three quarter and full, along with a choke key and are flush-fitting. The top rib is concave and is finished off with a single gold sighting bead on top of the excellently struck off barrels. Typical attention to detail is also the jewelled surface to the barrel chambers that compliments the other similarly appointed parts of the Artisan.

More important are the three-inch chambers, allowing a good range of cartridge types and loads to be used. Again, both barrels are proofed for high-pressure steel shot loads, so no problems for duck or geese as the occasion arises.

I like the Artisan’s system, as it has a single trigger, so no fumbling for the second barrel that is common on a lot of continental guns. It is also non selective on the safety catch, so the right barrel fires firsts. Some may baulk at this but to me it makes sense and takes another procedure out of the decision to pull the trigger out in the field. Anyway, you do have multi chokes, so deal with it! More important is the manual safety catch, so you are ready to shoot as soon as the action is closed; I don’t like auto safeties, as it does not work with my non-auto brain!

The stock is, in a word, wow. You know when you have picked up a piece of quality because it has that unique tactile quality of craftsmanship that real hands have been used on. The smell and touch takes you straight back to those old world gunsmiths with blacking lamps and lingering aroma of Young’s 303 oil!

Firstly, not your typical straight pistol grip on a side-by-side but a fuller pistol grip type, with a nice rack, topped off with a metal cartouche and engraving and there is a metal pistol grip strap to the front edge that is engraved and has the serial number.

The comb is low but has a perfect cast and barrel alignment for me, with a wood recoil pad secured with two engraved screws, again lovely attention to detail. The forend has an Anson and Deely type latch and is beautifully engraved and the inner side is jewelled and again, even the securing screws are turned and engraved.

Quality of wood is outstanding with a grade AAAAA, near special selection in my eyes. Deep rich hues of dark Ciracssion walnut and swirling figuring and flawless hand rubbed oil finish, although the left side was better than the right side. The chequering too was precisely cut, with defined diamond edges for crisp looks and very good grip.

Adorned to be adored

There is engraving and there is engraving; most modern engraving is a bit thin and shiny for my liking. The Artisan has a blend of old-world, silvered patina and really superbly executed deep and fine engraving, that stands out, but is classy without being tacky, if that makes sense. It’s everywhere; I suppose at nearly seven grand you expect good adornments, well, you will love this.

The rounded action in its self is very classy and the way the engraving rolls around it and takes the profile of the Artisan is very well thought out. The left side is a couple of partridge rising form a woodland edge, with profusely engraved acanthus leaves and bordering. The right side too has a hunting scene of rising pheasants off a field and similar anacaathus leaves. The bottom of the action has a duck flying onto a pond, framed in more leaves and scrollwork.

The trigger guard has trailing scrolls around a blank cartouche for your initials and as stated before, the pistol grip strap, cap and forend catch are all engraved. Overall attention to detail is superb, no other word for it.

Right, we have established she’s a beauty, but can she shoot as well as she looks? Handling-wise, the weight to length ratio is good, with no front-heavy feel, despite the 30-inch tubes, which allow a fast and natural swing to be maintained. There is a natural posture to the Artisan, with your eyeline being level and straight down the rib and bead. I did find the action stiff at first but it’s brand new, so not a problem.

Because it is a cracking shotgun, you do tend to be very careful with it, okay on the shooting line but not one to trudge around the field, although I would.

I patterned the Chapuis on pattern boards at 30-yards, with the full choke installed in the right-hand barrel. For me, I did find the patterns were a bit high and right but overall density and spread was very good.

First up were the VIP Game cartridges from Eley. They use a 67mm case and have a 15mm high base and black case design. Although designed to fit classic 2½-inch, it suits the Chapuis heritage well.

They shot with a good overall performance, with minimal recoil and even patterns with the 28-gram and No 6 shot. There were even and dense patterns, with a total of 208 pellet hits, of which 66 covered the inner 15-inch circle and 142 outside.

Another Eley case but newer concept with copper-plated shot, was the Zenith. It has a 70mm case with a fibre wad and 32-gram load, although 30- to 36-gram loads are available.

In the Chapuis, I had better overall distribution, as the pattern was dead central and at point of aim. In fact, very well distributed and lovely even patterns on the 30-yard pattern board and full choke.

I had 221 of the No 5 shot from the 32-gram load hit the board, with 68 hits to the inner circle and 153 to the outer circumference, a product of the copper plated pellet load.

Pigeon Select is a good load for pigeons, with a plastic wadded 2¾-inch (70mm) case and has a payload of 30-grams of No. 6 shot in a red case.

In the Chapuis, with full choke, I had 253 hits at 30-yards, of which 100 pellets were in the inner 15-inch circle, with a slightly high bias but even shot pattern overall.

It’s difficult really to convey the quality and individuality of this Chapuis Artisan, as many shooters play it safe and go for the norm. Well, for the price, which is high let’s be honest, you get a far better crafted and almost bespoke shotgun in my view. Metalwork, fitting and finish, as well as the superb wood quality, really make the Artisan a shotgun to covet and show your individual side.