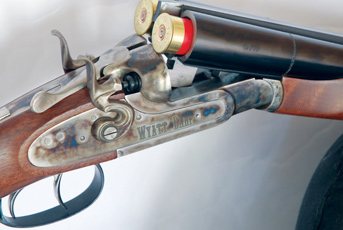 Shotguns in general as a class of weapons seems to have mythical powers, so the film industry would have us believe. No they can’t pick your enemy up and throw them 10 feet through a solid wall, neither are they any good at longer ranges. However those huge muzzles are perhaps one of the most intimidating sights ever if you are looking down them. Plus they take little skill to use and at close range they subscribe to the ‘everybody gets a bit’ principle!

This is why even today the generic shotgun is still considered possibly the ultimate close defence weapon, though in the police and military less so now, being in the main supplanted by the SMG and assault rifle except for door busting and similar tasks. But let’s go back to the time when they first started appearing and were appreciated by good men and bad alike for their effectiveness and reputation.

I consider the term ‘sawn off’ an erroneous one, yes many guns were cut down for concealment, but equally many were purpose-built for the job in hand.

A short barrelled gun with just a pistol grip is a scary looking item but lacks range, power and is a bugger to shoot! However, something around 20” with a proper butt is still handy, pointable and to a degree concealable, which is something Colt realised in their 1878 side hammer double. Though similar makes abounded in the 1800s the Colt stands out as the epitome of the marque and these guns sold to peace officers, Well Fargo agents, Texas Rangers and even Pinkerton detectives.

The gun was produced between 1878 and 1889 with approximately 20,000 units being made. It used the British-designed W&C Scott top lever action of 1860 and was available with either twist steel or Damascus twist steel and iron barrels. Here strips of the metal are wrapped around a mandrel to form the tubes. With Damascus being the most attractive due to the unique colourations and pattern of the finished item.

What I have here is Pedersoli’s take on the 1878 in the form of their Wyatt Earp gun. It’s really a standard sporting gun cut down to a 20 1/8” for the purpose. They were originally offered in 12 and 10-gauge though Colt did make an 8-gauge for US President Grover Cleveland as a one off. The 1878 also featured in the 2008 cowboy film Appaloosa where Viggo Mortensen’s character carried a full-length 8-bore and used it with devastating effect!

Today the only sporting use of the Wyatt Earp is for Cowboy Action Shooting, which in the UK would be the main reason to possess. Being sub-24” you might think the shotgun would be illegal, however, it goes down on your ticket as a Section 1 firearm doubtless with restricted usage for British Western Shooting Society (BWSS) events only. Frankly it’s not a lot of good for anything else!

The gun is built to good standards with quality walnut for the pistol grip butt with chequered grip and beaver tail type forend, along with a colour, case-hardened action. The barrels are blued and built to handle modern ammunition and show Cylinder chokings in both tubes, chromed bores and 3” chambers. A simple brass pin sight sits on the low rib between the muzzles. Opening is by a top lever, behind which is the only modern consideration, a sliding safety catch, forward - FIRE and back - SAFE.

Operation is by twin, external rebound hammers, which sit proud of the firing pins until the trigger is pressed, once fired they spring back off them, which is a form of basic safety system. The gun offers twin triggers with the forward firing the right tube and the rear handling the left. Unusual on a double and doubtless done for quick reloads; pressing the top lever results in the action falling open, so no struggling with stiff barrels. Typically it’s not an ejector so the empties need to be pulled out by hand or shaken free.

The Wyatt Earp is a simple gun to use. To load push the top lever to the right and the gun will fall open. Drop the shells in and shut the action then thumb the hammers back and you’re ready. I’m told with practice it’s possible to sweep both back together by using your thumb across the ears, I could only do them one at a time!

Recoil in this short 7 lb gun can be a bit fierce given what ammo you use and the steel butt plate does not do a lot for comfort either. However, I did find the chequered pistol grip improved control. The unload is manual with the fired cases being raised about ¼” from the chambers where they are pulled free with your fingers. Modern plastic-hulled shells, certainly with a star crimp don’t tend to fall clear when you point the barrels upright, which was the standard practice for a quick unload with the old brass-cased ammo of the period.

Though dedicated, the Wyatt Earp is a really nice recreation of what is doubtless an iconic design of the period. If you shoot BWSS events and want to keep it as authentic as possible then it’s the one for you! Pedersoli now offers a true sporter on this frame; called Le Bohémienne. It shows better walnut with full chequering and browned, 28” barrels with internal, flush-fit multi chokes and is proofed for steel.