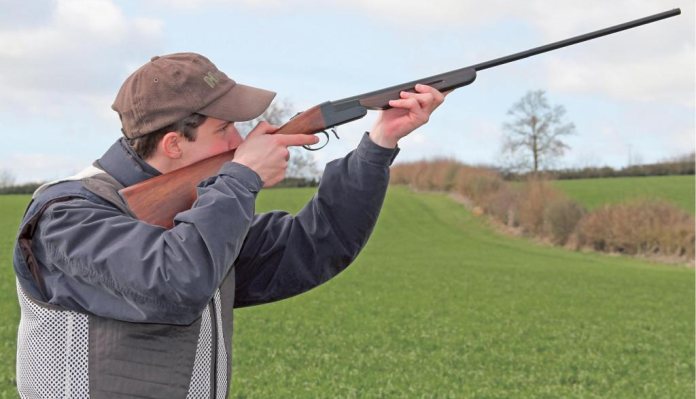 Its very hard not to like a 410-gauge shotgun, as it rekindles childhood memories of learning to shoot a shotgun or that a 410, with the right load and in the right hands, is a damn good vermin gun. Why complicate things with this diminutive cartridge, when a single barreled non-ejector that weighs no more than a bag and a half of sugar is available from Yildiz for less than £200. Yildiz hail, like so many shotguns these days, from Turkey but have a real following and loyal fan base, due to their good build quality and reliability.

There’s not much to go wrong with a single barreled 410 and, for the price, the TK36, with its folding type break open barrel mechanism, makes it a fine youngsters’ or starter gun, as well as a vermin tool for around the farm.

Being a folder, the stock is in two halves, with the forend typically being a slim affair, into which a large recess is cut to accept the trigger guard from the action when the gun is broken and stored away. The forend is only 9-inches long and an inch wide and is secured by a single screw at the tip. You have a larger finger groove running down either sides for added grip and, as with the rear of the stock, is finished with a dark wood oil stain over plain walnut beneath. The rear butt section is simple too but with a rounded pistol grip and long gait and slim profile but feels very natural to handle. Grip is aided this time with some machine cut chequering panels and a slim plastic butt pad with chequered face helps hold in the shoulder. The comb is quite low, and the length of pull is short at 13.5-inches, as expected. Folded up, it is only as long as the 28-inch barrel.

This is marked ‘Yildiz Silah Sanayi Burdur Turkey’, showing its credentials and then TK- 36 Magnum. This is therefore a three-inch chambered 410 that can therefore handle 2, 2.5 as well as the 3-inch magnum shells.

Total length is 28-inches but feels shorter, probably due to the reduced length of pull of the stock or the fact that it is incredibly skinny. Only 14mm at the muzzle making for an ultra lightweight gun at 3lbs. Choke wise, full choke is standard but Yildiz have gone for a more open choke at ½ and actually this suits the 410, as it does not squeeze the shot too much together when it goes through the choke, leading often to blown patterns; smart move! The muzzle has a very good rolled edge and finished well, not just cut off like some. Sighting is via a single gold bead at the muzzle and a very small V slot cut into the action top.

The finish is a subdued matt bluing, which complements the black anodised action finish. The barrel pivots on two captive bolts that locate either side of the large locking lug protruding from the bottom of the barrels. The action face end has a large, notched recess/lug that locks into place when the barrel is closed to the action. Now the large silvered release lever that protrudes 24mm beneath the action springs back to lock firmly the barrel against the face of the action. A short tug on this lever after firing and the barrel drops down and the non-ejector system, i.e. extractor, raises the case from the chamber, ready to be picked out by hand.

To save weight further, the action itself is aluminum and black anodised with ‘Yildiz’ and the serial number engraved to it. The polished, blued trigger guard is steel and protects the smooth silver trigger blade. Trigger pull was a hefty 6.75lbs but still no problems at all.

There is a manual safety catch on the rear tang with no lettering at all but back is safe and forward ready to fire. Also, the action is cocked as the large silver barrel release lever is pulled back, as this sets the trigger sears. Finally, the firing pin, housed in the action face, is set into a steel breech insert, to take the rearward pressure on firing. Not a lot else to say really, very simple, fool and bomb proof; let’s go and shoot it.

First up, the Yildiz feels like a feather, no weight at all but still feels solid and well built. When the TK36 is opened and closed, it is smooth, yet tight, as it should be, with no flex or movement of the action. Once shouldered, it is as though you have nothing in the hand at all! Yet that low comb brings your eye right down that barrel line. I would say, having shot the patterns, that I would place the gold bead just above the V slot slightly, as all patterns at 25-yards were just a tad low.

The Eley Four Long were first up and these are the smaller 2.5-inch cases and I wanted to see how they performed in the 28-inch barrel and ½ choke at 25-yards. As it happened, it was a bit sparse. The 12.5- gram load of number No. 6 shot only managed 72 pellets on the board, with 53 outer strikes and only 19 inner hits to the 15-inch circle, of which there was a void in the centre.

Try again. Next, were the Hull High Pheasant; wow, what a difference! This time, the 3-inch loads with the payload of 19 grams of No. 6 shot a total of 138 pellet strikes. You had a really good, well spread pattern with 91 outer hits and 47 inner strikes and a good number right around the centre point. A really great load and in the TK36; very little recoil and noise.

The Remingtons are also a very good 410 load, if a little expensive. Again, a 3-inch loading with 18-grams of No. 6 shot. Like the Hull loading, the Rem shot a really good pattern, with a total of 154 pellets, with 101 around the 30-inch circumference and the rest 53 in the inner circle.

All cases were easy to extract and reload, as the large extractor eased out the fired cases with no problems. Also, the ½ choke really allowed the patterns to not bunch up at all and were tighter than I had anticipated and produced some really good, even spreads with the 3-inch loads

What a nice, affordable, well made 410 the Yildiz TK36 is. It folds away to almost nothing (28-inches overall length) and is as light as a feather in the hand and thus handles superbly. The patterns with that ½ chokes barrel were better than some double barrel 410 shotguns I have tested at eight times the price! I still have the Saddlery and Gunroom 410 Hushpower moderator and now, with a 3-inch magnum chambered gun to hand, I will be testing some subsonic and 3-inch loads.