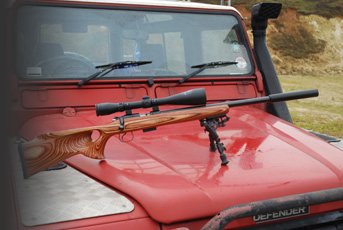 As most of you know I’m a big fan of the 17HMR cartridge and bought into the concept when it first appeared over seven year ago. My rifle of choice then and now is Ruger’s M77/17 All-Weather; great gun though I had to cut the barrel back from 24 to 20” as it was far too long. Also, try as I might, I could never locate a thumbhole (T/H) stock for it, which I thought would really compliment how I use it. I am finally having one built!

It always occurred to me that Ruger not adding a T/H to their rimfire line-up was a mistake, as Savage already offers one ‘off-the-shelf’ and what is probably the most prolific make - CZ now has this option too. I would not pick a thumbhole layout for all my rifles, as it will add extra and un-needed weight and bulk. But for certain and less walk & stalk needs the extra control offered by that big, scalloped pistol grip and high comb gives good support and position, which with a 17HMR in competent hands will allow head shots out to 140/150-yards and body shots to 170/180-yards on rabbits and hares.

The generic CZ 452 has been with us for many years now and I have lost count of the times I have tested them. However, by today’s standards the build quality has certainly improved! One comment many new owners levelled against the design was that the action was stiff and took a bit of running in; with which I totally concur.  What I have here is the latest Model 455, which is near identical to the 452. This one is the heavy barrelled Varmint model with a thumbhole stock but with a 16” tube in 17HMR.

I have found that in 17HMR a 19-20” barrel seems to be ideal in terms of handling and maintaining the average, quoted factory velocity of 2500 fps/245 ft/lbs. My findings with a 16” tube show an expected loss of 100-150 fps giving an average figure of 212 ft/lbs. This might seem critical but as you go further out 100 to 180-yards the actual difference is around 10 ft/lbs. Personally I would stick with a 20” tube as I feel the 17-grain HMR pill needs every foot per second it can get to retain maximum possible energy. But and by the same token I do not see a 16 incher as a problem either and in what is an overly thick barrel on the CZ Varmint it certainly makes for a handier rifle. In a 22 Long Rifle it makes no odds as everything is burnt by 12-14”!

Let’s face it; the Savage and Marlin 17HMRs are butt ugly! The CZ is not, however, the addition of the T/H stock will improve the cosmetics of any rifle. The build goes for a mid-brown laminate and the layout is right handed with a big, scalloped-out section behind the full and near upright pistol grip. With a high, straight-line, roll-over cheek piece and full, rounded forend that lightly free-floats the barrel, it’s finished off with a slim rubber butt pad and QD sling studs fore and aft. If you have never experienced a TH stock then I suggest you have a go as the chances are you will be won over by its layout.

A good stock is essential for shootability, but if the action is not up to it then it rather negates any advantages offered by the furniture. In the past the comments about stiff action and feed levelled at the generic 452 were reasonably valid. However, I have no such complaints with the 455 in my hands. The layout of the action has not really changed with its short/near straight bolt handle rotary safety catch, cocked action indicator and magazine release catch at the front of the well.

The trigger shows CZ’s traditional, long, curved blade set in an over-sized steel guard, so no problems on cold days with gloves on. The break is a reasonably crisp and pleasing 2-3 lbs from the box; suffice to say there’s no problem with shot release or accuracy potential with this puppy!

Feed is from a standard, 5-shot, single-column magazine, now made from polymer. CZ sensibly offer an optional 10-shot clip, which addresses the capacity issue so bringing the 455 up to the level of the Ruger 77/17 and Browning T-Bolt 17HMRs with their 9 and 10-round payloads. This has always been a USP for these two guns, so again a smart move from CZ, though being a single column box it does hang out of the action a bit… But at least you are not constantly topping up a smaller mag!

Generally this is a good looking and handling rifle. There are no iron sights fitted and the receiver shows an integral, ½” dovetail for scope mounting. From the box the Varmint comes ready threaded ½ x 20 UNF with a thread protector, so one less thing to worry about. Magazine release is OK with the empty falling free into the hand, though not the easiest thing to operate with gloves on. But in truth few guns in this area are!

The slim rubber butt pad is not there for recoil control as it’s not required with a diminutive calibre such as 17HMR. But it does lock the rifle securely into the shoulder with no slippage, which is another factor that will aid overall performance. The forward sling stud positions the bipod fully on the forend; albeit just back from the tip. But a second stud about three inches further down would also have been useful, which is something you usually find on most fullbore varmint-type rifles using this build.

Vastly improved in terms of operation the CZ safety always seems back to front to me. Set at 90° to the rear of the bolt on the right it pushes forward for SAFE and pulls back to FIRE. However, on a TH stock this makes little difference as you have to break your firing hand position to operate it anyway. To its credit it’s easy to use, in the past I have encountered some 452s that were so stiff on this control to be near impossible to use.

At an SRP of £616 the CZ455 Varmint Thumbhole represents a good price for a fairly up-market product. A spare, 10-shot clip will add £39 to that! This compares well to Ruger M77/17 All-Weather with its stainless finish and standard laminate stock, which is now touching near a grand. Serious competition in terms of cost comes from the Browning T-Bolt at around £500.

For the test I fitted the Varmint with a Nitrex TR One 3-10x50 scope in Sportsmatch rings, up front an Edgar Brothers (Harris-style) bipod and on the muzzle an A-TEC CMM-4 moderator from Jackson Rifles. On its own the CZ tips the scale at 7.6 lbs, and measures 33” butt to muzzle, which is perhaps one of the advantages of a rimfire carbine as we pretty much always fit a moddy so the overall dimension is still not too bad… I would say the all-up (ready to shoot weight) is just shy of 9lbs and about 1/2 lb less without the pod.

Ammunition went to Hornady’s 17-grain V-MAX and 20-grain hollow point loadings. For me I zero any 17HMR at 100-yards and expect it to shoot a worst of sub-1”, as the rifles in general are pretty accurate. Set up like this it will shoot near flat from the muzzle to 120-yards give or take ½ to ¾”. At 140/150-yards which is my maximum head shooting range for static quarry you just have to lift the cross hair about 1” above its noggin to drop the pill into the brain area.

Off the bipod the CZ was shooting around ¾” so very much in the ball park for this sort of equipment. Again the apparent improvement in build quality showed with a smoothly cycling action and easy feed and extraction. As previously mentioned – the TH stock really is a nice design that promotes accuracy from a more rested/supported position. For unsupported use the extra weight and compact size tends to aid stability.

Comparing the TH Varmint to other 452s and 455s shows that the new stock design does bump the price up by comparison to normal walnut or synthetic furniture. However, I feel this is a very able rifle in what is probably the ultimate rimfire calibre to date and at the money quite a bargain, though I would definitely add a spare, 10-round mag to the package…

WE RECKON:
Great thumbhole design that promotes good shooting. CZ have finally got their act together concerning the smoothness of the action. Overall an accurate and effective package at good money