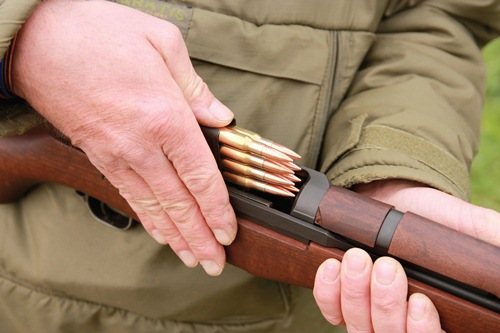 Described by General George S Patton as: “the finest battle implement ever devised” and an unknown commentator as – ‘the rifleman’s rifle’, of the two I subscribe to the second when it comes to the M1 Garand. For its day it does stand out as the first ever, general issue military self-loader, even though other designs saw limited use as early as World War 1. It was also the wellspring for its replacement the 7.62 NATO M14.

Don’t get me wrong I love the old Garand and had the pleasure of owning one for many years. However, it’s a quirky design with a rather strange feed system and like most military rifles of its day seriously over engineered. But it’s a shooter! I have won a number of iron sights comps with mine, and it really is a rifleman’s rifle! I defy anyone who shoots a rifle to pick up an M1 up and not appreciate how good it feels and handles.

Suffice to say the Garand was a contender for the US’s first self-loader and won out over other designs to be officially accepted as the U.S. rifle, caliber .30, M1 chambered in 30-06 Springfield. One piece of trivia on its eccentric designer John C Garand; he had a love of ice skating and when the local rink closed down for the summer he installed refrigeration pipes in his front room and flooded it so he could still skate!

RE-BIRTH OF THE M1

In post self-loading rifle UK I have only ever seen two manually-operated/hybrid M1s and I was never truly certain of their parentage. I have also seen few M14/ M1As either and in general if you want a .30 calibre straight-pull then it’s either an L1A1 or FN FAL, neither of which is truly practical when compared to the top choice – a 223 Rem AR15.

However, in shooting circles the M1 Garand has a mystique all its own, probably down to films like Saving Private Ryan and the way its en-bloc clip ejects with a distinctive ‘ping’ after the last round has fired. Many times I have heard the comment; wouldn’t it be great if someone could bring in an M1 straight- pull? Well finally it has happened as Neal Parnham (Suffolk Rifle Co) who is big in this area managed to find a company who were prepared to build UK-legal rifles using of all things Italian-made Beretta and Breda components. Let me explain.

After World War II the Garand was adopted by many nations as an off-the-shelf self-loader, with Norway, Denmark and Holland being a few examples. To save logistical hassle the Winchester machinery was shipped to Europe and components made by both Beretta and Breda. In fact Beretta went a stage further and produced the BM59, which was in essence a box mag Garand in 7.62 NATO. The upshot of this was that a number of new manufactured and unused actions and parts were found, which means they could legally be built up into manually operated guns for our market.

It seemed very strange to see to what is to all intents and purposes a brand new M1, as my pre 1988/SLR ban rifle was military surplus. Stocks are walnut and made by Minelli who are big in the UK as they make woodwork for airgun companies the likes of Daystate and Air Arms. Obviously the barrel is new and un-drilled for a gas port and all other components are unused with the exception of the gas tube which did look surplus. The finish is a grey phosphate as the original. It’s estimated that over 6.5 million rifles were produced overall with a World War 2 unit cost of $85 per gun, which back then was not cheap. In the 1970s Springfield Armoury offered a civilian version doubtless to compliment their M1A (civilian M14).

Though all Garand’s were chambered in 30-06, after the war the US Navy had rifles converted to 7.62 NATO in line with the adoption of this calibre by the US and other member countries. This was achieved by an insert that took up the reduced COL in the full length, 06 chamber, which was then glued and fired into position. The reasoning I assume; yes we need a 7.62 but why does the Navy need to buy new rifles?

Visually the M1 is a most pleasing design with nice lines and natural shootability. It is also a big and heavy gun at around 10.5 lbs loaded and 43.5” with its 24” barrel. However, it does not feel that heavy and balances better than most modern heavy barrelled AR15s.

The mechanism uses a twin-lug rotating bolt that is actuated by a long, 24” piston/ operating rod with a cocking handle on the right of the action. Feed is quite involved with an integral magazine with a sprung lever mechanism leading up to a skeleton platform with shuttling round divider plate. It is fed by an en-bloc, 8-round clip that goes into the magazine and acts as the ammo box until all the cartridges are fed and fired then automatically ejects with the action holding open. It offers the aforementioned and distinctive ‘ping’ noise when it does, I don’t know why but it’s a really pleasing sound!

On the left of the receiver is a long, L-shaped catch (clip latch), which allows you to eject the clip and any ammo remaining if you want to unload. The trigger is a 2-stage unit with about 1⁄4” of readable take up followed by a surprisingly crisp break of 4-5 lbs, again very useable. The safety is ‘in-guard’ with a lever at the front that is pulled rearwards by the trigger finger for SAFE and pushed forward to FIRE; most practical.

Sights are impressive with a fully adjustable rear aperture with left and right knobs giving, micrometer windage and elevation correction. The front is a blade set in protective wings atop the gas tube ring. An Allan key at the rear allows it to be moved laterally for coarse windage, once sorted the rear dials could be set to zero. In used fine tuning your aim is a doddle and compensating for wind too; like I said well over engineered for a battle rifle. Features like this really endear the M1 and later M14 to shooters.

My tester had a Breda-made receiver marked up with a crown and the initials FKF (Førsvarets Krigsmateriel Førvaltning) making it a Danish M1 component. On the point of legality the M1’s are made in Europe to UK-legal, ‘large firearms’ requirements using unissued components and therefore imported as a Section 1.

The last time I shot my M1 was in 1989 the year of the SLR hand-in and I was really looking forward to seeing what this new gun could do. Rifles will come with 1 x clip, spares are still reasonably easy to locate in the military surplus and re-enactment market. I would advise getting hold of a good few, as being 2nd hand and from past experience not all work 100% and they are easily lost too! Also if you want to dress it up like the original a US 1907 leather sling is what you need. Neal includes the original cleaning kit that fits in the butt trap and is looking into slings.

When the M1 first arrived I only had a mish mash of sporting ammo from 150 to 180-grains, which I used for function testing, as we all know a hybrid straight-pull is not worth a damn unless you can extract and eject the cases easily! Being a Garand I decided I needed to feed it what it was designed for and contacted Henry Krank & Co Ltd as they import Prvi Partizan (PPU) ammo who offer a reproduction of the US service M2 ball cartridge in its original 150-grain FMJ loading. The M2 is rated at 2800 fps with the PPU coming in at an average of 2767 fps so near enough!

Loading the clip is easy as it’s really an open-front/top & bottom box magazine, just stack them in, making sure the rims are touching the rear and the eighth locks it all in tight. In military service ammo was only issued pre-loaded in 40-round bandoliers (5 x 8-round clips)!

Loading is a bit of an art and you can do it two ways. METHOD 1- open the action then pull back on the cocking handle to take the weight of the spring and insert the clip. There are pimples on either side that engage with slots in the receiver to align it correctly. Still taking the weight push it down with your left hand until it clicks then let the handle go, which will fly forward to chamber the first round. Here it’s best to give the handle a smack with your palm to ensure the bolt is fully locked.

METHOD 2 - The quicker/cooler way is to open the action and locate the clip as before, then support the forend with your left hand. Make your right hand into a blade and with the edge push back on the handle to take the weight, then push the clip in with your thumb and smartly bring your hand away. It’s quicker and more efficient but be warned get it wrong and you get ‘M1 thumb’ as in the bolt picks up your thumb and tries to load it, need I say more?

If you need to unload a partially loaded rifle which is unlikely as chances are you’ll just shoot to the PING for the sheer hell of it proceed as follows. Place the butt on your right thigh, and eject the round in the chamber keeping the action open. Then cup your left hand over the receiver and press the clip latch with your thumb, the clip and remaining live rounds will be pushed up and out to catch. Coolest of all is catching the clip after the last round has fired, if you want to show off, but don’t drop it as you’ll look like an idiot!

Being brand new the main spring was very strong and I found it all but impossible to load using METHOD 2. My old M1 which was obviously run in was never a problem and in competition the advantages were obvious. I would tentatively suggest taking a coil or two off the spring to ease the pressure slightly.

With that out of the way I ran the gun with the heavier bullet weights and it was OK with a few hard extractions, which was not unexpected for a new rifle. Switching to the PPU M2 and rested/supported at 100m the M1 was printing some seriously good groups for an iron sighter with a maximum spread of 3”. I had a few more hard extractions but after 80 + rounds the mech was starting to run in, a dab of molly grease on the locking lugs and bolt run certainly helped.

I was expecting the cocking handle to be a bit small for easy operation, but it proved adequate. However, I would say that any .30 cal hybrid is a lot more physical to operate than a comparable 223 AR as you are moving more metal around. In terms of practicality the M1 will always be slower as for example on a 20-round course of fire you will need to reload twice.

I don’t however see the M1 as a purely Practical Rifle or CSR tool as it has its limitations, it is however a thing of beauty and extreme shootability with good accuracy potential. Were this my gun I’d run it on either Sierra 168-grain Match Kings or Hornady A-MAXs and I reckon it would sing and also bring a big grin to my face!