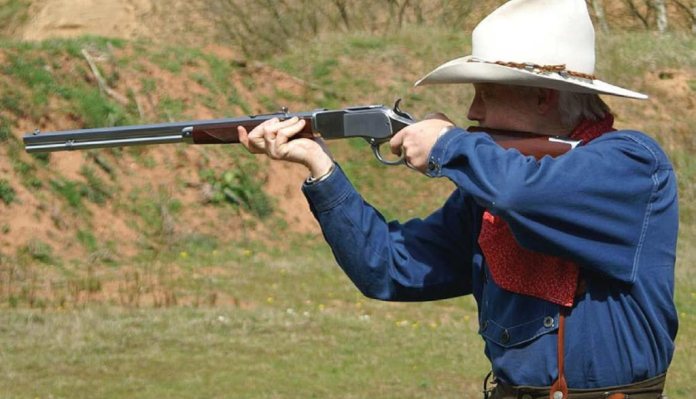 Many of the old-time ‘Western’ black powder cartridges were given a new lease of life with the advent of Cowboy Action Shooting (CAS) in the early 1980s. As a result, many of these cartridges are now at least as popular than they were in their heyday, almost a century and a half ago, although today only the true aficionados still load with black powder. In the first of a short series, we look at what may be called the daddy of them all, the .45 Colt.

Mention the term ‘Colt 45’ and most folks will immediately think of the Colt Single Action Army Revolver (SAA), commonly called the Peacemaker, probably the most recognised handgun in the World. Countless movies and TV series have usually shown this revolver to be the only sidearm in the American West, used by both good guys and bad guys alike. Of course, we know this is not the case, but because of its simplicity and reliability, it was the first choice for many, including the US cavalry, with over 190,000 being produced before the end of the 19th century. The first production models were chambered for a new .45 calibre cartridge, and since then the Peacemaker has been offered in over thirty different calibres.

This cartridge is often called the .45 Long Colt, which is a misnomer as there was never a .45 ‘short’ Colt. The name probably derives from the time when the US Army was using a number of Smith & Wesson break top revolvers at the same time as the Colt SAA. The S&W used a shorter .45 calibre round than the Colt, and this cartridge would chamber in both revolvers, but the longer Colt cartridge would not fit the S&W pistol. On more than one occasion troops using the S&W were sent Colt ammunition, which of course was useless to them, and some using the Colt were sent the less powerful S&W round. One can imagine some garrison quartermasters requesting the .45 ‘short’ S&W cartridge while the Colt-equipped troops would ask for the .45 ‘long’ Colt ammunition.

As soon as the Colt revolver was adopted as the cavalry sidearm, the government’s Frankford Arsenal began making cartridges. These were copper cased, 15/8” long, with an internal Benet priming system and loaded with 30-grains of powder behind a 250-grain conical lead bullet. They were packed in boxes of twelve with a label describing them as “Cartridges For Colt’s Revolver, Cal; .45” and the carton was given a coating of shellac for protection.

When the first three thousand of above-mentioned S&W revolvers were ordered in 1874, the cartridge was shortened to 17/16”, the powder charge was dropped to 28-grains and the bullet weight reduced to 230-grains, with a flat nose. Boxes were then marked “Revolver Ball Cartridge, Calibre .45”.

From 1880 the shellac coating was discontinued, and the next change came in 1882 when a boxer primed case was adopted, still made of copper. This facilitated the reloading of the case and instructions for doing so were printed on the box label. Around 1887, experiments were carried out with reloadable brass cases but there were not adopted for use until 1890.

From pistol to rifle

When it was introduced in 1873, this was the most powerful handgun cartridge available and was acclaimed for its knockdown and stopping power. No other factory loaded handgun ammunition produced more muzzle energy until the .357 Magnum came along in 1935.

During the 19th century, this cartridge was restricted to handguns only, and it was not until the modern Italian replica arms manufacturers began making copies of early lever-action rifles that the .45 Colt was chambered in a long gun. The simple fact is that the early cases had a very small diameter rim and there was not enough for a rifle’s extractor to get hold of to eject the spent case. Also, readers will note that the majority of the small, what we now call pistol calibre, centrefire rifle ammunition of the day was tapered or bottle-necked. This helped to ensure positive feeding in magazine-fed rifles and the thinner necks on these cases also provided a better seal in the chamber, preventing the rearward escape of powder gases, particularly important when using black powder. Even using today’s smokeless powders, given like-forlike loads, shooters using straightwalled rifle ammunition such as .45 Colt or .44 Special may notice that their cases are sometimes a little dirtier than those from rifles using bottle-neck rounds such as .44-40 or .38-40. Modern .45 Colt cases are all made with slightly larger rims, forward of which is a shallow groove to allow rifle extractors to do their job.

When Mr Blair and his friends decided that the British public were not fit to own cartridge handguns, a great number of pistol shooters simply gave up. There were several diehards, however, who changed their handguns for lever-action carbines and continued shooting.

The chosen calibre for these individuals is usually .38/357, with the larger, original calibres generally being left to the Cowboy Action Shooting fraternity. While there are the ‘competitors’ who will use the lighter .38 Special round in CAS competitions (both here and in the USA) those more into the ‘Spirit of the Game’ will stick with the larger calibre, more traditional cartridges. With very few exceptions, rifle targets in UK events will be paper or card, at distances of between 25 and 50 yards, so heavy loads are not really necessary.

If you are shooting the ‘old’ calibres and fancy giving black powder a try, then generally the rule is to fill the case leaving just enough, or slightly less, room for the bullet. A little compression of the powder is ideal but make sure there is not an air gap between powder and bullet. You will come across advice telling you to lighten your loads by reducing the powder charge and filling up with semolina or the likes. If the full case of black powder is too much for you then stick with smokeless and do your cooking at home!

For those going down the smokeless route, there are almost unlimited choices as every powder manufacturer will offer one or more sets of data for this calibre. Most of today’s shooters will have their favourite brand of powder and a glance at the appropriate loading manual will provide all the information that you require, with some now providing specific ‘Cowboy Action’ loads.

IMR powders not only provide a range of possibilities with their standard powders but have developed a powder just for CAS cartridges; Trail Boss. Sadly no longer available in the UK, but if you are lucky or had the foresight to buy a few tubs, you may still be using it. When comparing prices it should be noted that this powder is supplied in 9oz tubs, whereas others are in half-kilo packages. To quote the manual “Trail Boss is designed specifically for low-velocity lead bullet loads suitable for Cowboy Action Shooting.” This is a high loading density powder which, weight for weight, will occupy a larger volume of the case than standard powders.

A new kid on the block for CAS shooters comes from Vihtavuori, who, in 2006, introduced their own special ‘Western’ powder named Tin Star. One wonders where they got their information about CAS shooting because the reloading guide for that year did not include any Tin Star data for the two most popular Cowboy calibres, .45 Colt and .44/40! A couple of emails to them has not improved the situation and I believe that the new manual still does not cater for these calibres. I’m not sure how they expect to sell this powder, either here or in the USA, with these omissions.

For those wishing to experiment, I would recommend a visit to www. ammoguide.com where you will be spoilt for choice, not just for this calibre but any that you wish to load for. Full use of the site requires payment of an annual fee, but for reloading buffs, it will be money well spent. An excellent reference for this, and many other old-time ‘Cowboy’ calibres, is Mike Venturino’s book, ‘Shooting Lever Guns of the Old West’, which contains information on the guns, both original and reproduction, the ammunition (including loading data) and use of these combinations, today and in the late 19th century.

All of the major case manufacturers turn out brass for this calibre and ready-made cast lead bullets (jacketed ammunition is not allowed in CAS events) are easily obtainable in a choice of weights. Again, for the more adventurous, moulds are available from Lee, Lyman and the likes, and your favourite manufacturer will provide loading dies. I believe that I am right in saying that every current leveraction rifle manufacturer has at least one model in .45 Colt in their range. There are also several single-shot rifles, such as Sharps and Remington, that the manufacturers of reproduction guns have included in their line-ups.

While it has never been recognised as an outand- out target round, the cartridge is more than capable for use in CAS competitions, and a great choice for the traditionalists. It is a shame that many of today’s newer shooters may never have the opportunity to use the .45 Colt where it really belongs, in a single action revolver.