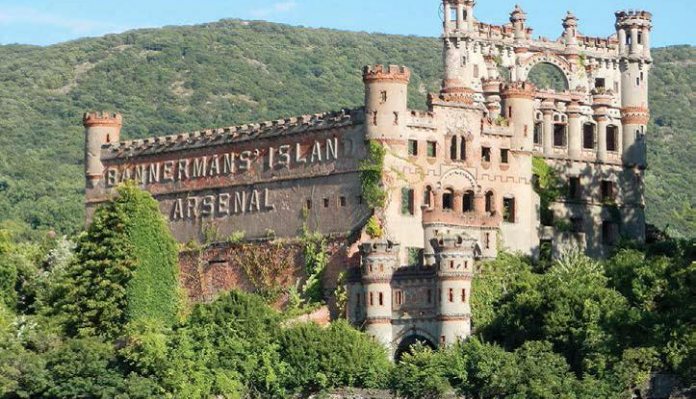 Some years ago, I purchased an antique derringer from a chap who asked if I wanted a couple of old books as he was about to throw them out.

One turned out to be a military goods catalogue from 1949. Although I had come across the name of Francis Bannerman previously, I did not realise they were still trading this late. An internet search unearthed a story that proved to be fascinating to say the least.

Most of us will, at one time or another, have purchased something from a dealer in military surplus. Whether it was a used US Army jacket from the Army & Navy Stores in your youth, or a piece of much needed kit for your military rifle at an arms fair. The internet has introduced collectors, reenactors and shooters to a massive international storehouse of militaria from all corners of the globe, where you can obtain everything from a button to a full uniform, from the smallest screw to a fully working military rifle (providing you have the necessary certificate). Whatever you are searching for, there will be a dealer somewhere who is likely to have that elusive item squirreled away in his stock. Because of the vast diversity of equipment, it is most likely that today’s dealers will specialise in one or two areas, enabling you to narrow your search and hopefully pin down what you need much faster. But there was a time when Americans at least could visit a virtual “one stop shop” for their surplus needs.

Story has it that Frank Bannerman, a standard bearer of the Clan Macdonald, escaped the massacre at Glencoe in 1692 and fled to Ireland, where his descendants lived for many years before moving to Scotland. Francis Bannerman, the sixth male to be so named, was born in Dundee in 1851 and three years later moved with his family to America, eventually settling in Brooklyn where his father, Francis V, set up a business which supplied paper makers with old rope. He was located close to the Brooklyn Navy Yard, so he was in a position to take advantage of Navy rope rejects and he also began to purchase other surplus or worn out items from Navy auctions and added ships chandlery to the business. Francis senior (it was a family rule that the eldest son be named Francis) joined the Union Army and fought in the Civil War, and at the end of the conflict he realised that there was an opportunity to expand when the government began to sell off for scrap the many thousands of weapons and equipment that were no longer required.

Young Francis had proved himself capable of looking after the business while his father was away fighting, and in the autumn of 1867 they had to move to larger premises to accommodate their increasing inventory. The supply of rope to the paper makers was still the mainstay of the business at this time but the surplus side was growing fast. In 1872, when old rope became scarce in America, Francis junior made a trip to Europe where he purchased large quantities. While there he spent some time with his grandmother in Ireland and met Helen Boyce, whom he married on 8th June 1872.

It was around this time that Francis V died and on returning to the United States the young couple concentrated their efforts on building the surplus side of the business, and soon the need for larger premises forced the purchase of another property, this time in New York City. This was a time when the arms industry was going through great changes with new technology pushing breech loading weapons ahead at a rapid pace, meaning ever larger quantities of the ‘old’ arms and accoutrements being disposed of by governments around the world. Bannerman was not slow to take advantage of the situation and soon their stock outgrew the storage space once again. In 1897 they leased a property at 579, Broadway, New York where they had around 15,000 square feet of floor space. By this time the company was producing a 350-page catalogue for their mail order customers, a tradition that carried on until the 1960s.

At the end of the Spanish-American war the company purchased over 90% of the captured Spanish guns and equipment from the US government, and also directly from the Spanish government before the evacuation of Cuba. There was so much that they had to lease three large warehouses on the Brooklyn waterfront. Amongst the items bought were millions of rounds of ammunition and clearly this needed a secure and, if possible, remote storage facility so, in 1900, the decision was taken to purchase Pollepel Island in the Hudson River, a 6.5-acre piece of real estate around 50 miles north of New York city and some 300-metres from the east bank of the river. Construction began in 1901 with Francis himself designing the buildings, fashioned after castles in his native Scotland, and giving the builders free rein to interpret his sketches. The plan was for three warehouses, homes for the workers and a six-story tower. The vast expanse of wall on the main building provided an ideal space for advertising and passers-by were left in no doubt as to what the structure was, with the words “Bannermans’ Island Arsenal” picked out in large concrete letters on both the North and east facing walls, resulting in the place being known as Bannerman’s Island rather than Pollepel. Later a mansion was built on the island which became the Bannerman summer home. A harbour was dredged and jetties built to bring in the never ending stream of articles from around the world.

In 1905 they purchased 510, Broadway from the Metropolitan Museum of Art and the same year acquired the property next door, number 499, giving them a shop frontage of 50-feet on this prominent thoroughfare. Both properties ran the full length of the block from front to back, a distance of 200-feet, culminating in a rear entrance on Mercer Street. The seven-story location was not only a salesroom with storage space but included a museum, open free to the public, showcasing the company’s vast array of merchandise. Together with the storeroom on Pollepel, it was calculated that Bannerman’s had a total floor space of some 15-acres, and he once boasted he could supply an army with 10,000 rifles and 10,000 saddles from stock.

An example of the deals brokered by Francis VI was when, in 1901, he purchased almost the full inventory of 5000 Rogers & Spencer revolvers from the Army’s New York Arsenal. The pistols had been delivered too late to be used during the war and had sat in storage for thirty-five years with the Army having originally paid $12.00 each. Bannerman bought them for 25.27 cents each and six years later was offering them for sale at $3.85 a pop. The fact that these revolvers never saw service with the Army results in many being found today in superb condition, making them a prize for collectors.

By 1908 the island arsenal was in operation although building work continued to accommodate the ever- increasing amount of arms, ammunition and equipment being bought as worldwide governments disposed of their surplus stock. When Francis Bannerman VI died in 1918, the business was taken over by his sons, Francis VII and David, and all building work ceased.

In 1920, Bannerman’s widow, Helen, relaxing on a hammock in front of the house, decided she needed a drink and went into the kitchen. At that moment a powder house containing artillery shells mysteriously exploded, shattering windows on both banks of the Hudson River and the blast was heard 50-miles away. When Helen returned to her hammock she found a large piece of concrete where she had been sitting minutes before. The cause of the explosion, which destroyed almost half of the main warehouse, was never determined but there were no injuries. The damaged roof and broken windows were never repaired and the castle began its slow downward spiral into oblivion.

Beginning of the end

The early part of the 20th Century saw business decline with the introduction of new Federal legislation regulating arms sales to civilians and by the time that Helen died in 1931, the remaining family members were beginning to lose interest in the once mighty Bannerman empire. A massive storm in 1950 sank the ferryboat which served the island and this proved to be the final straw. The family brought in a munitions expert to evaluate and clear out the remaining stock and the Smithsonian was invited to view the collection with a view to possible purchases. By 1959 the island was closed, its only visitors for the next few years being trespassers, vandals and treasure seekers.

After determining that all dangerous items had been removed, the island was purchased by New York State in 1967, but in 1969 a massive fire, again of indeterminate origin, swept through the castle and the interior, made from wood treated with kerosene, was completely destroyed and the island was declared off limits to the public. You would think that the island had seen its fair share of bad luck or misfortune, but fate was not finished with Bannerman’s Castle. In December 2009, the Hudson Valley saw a very heavy snowfall and some 30-40% of the front wall, along with half of the East wall, collapsed under the weight. What had once been the pride and joy of Francis Bannerman VI was now at the mercy of the elements, with the weather and local vegetation between them determined to wipe it from memory.

The island today belongs to the New York Office of Parks, Recreation and Historic Preservation, having been given to the people of New York by its previous owner, the Rockefeller Foundation. A separate organisation, Bannerman Castle Trust Inc., (bannermancastle.org) was founded to raise funds to stabilise the ruins and prevent further decay. There are no plans to renovate the remains of the castle itself, but the residence has been improved and now houses a gift shop. Pathways are being restored to make walking around a little easier and there are regular tours, which include guided or self-guided walks, to the island which often tie in with musical events and film shows.