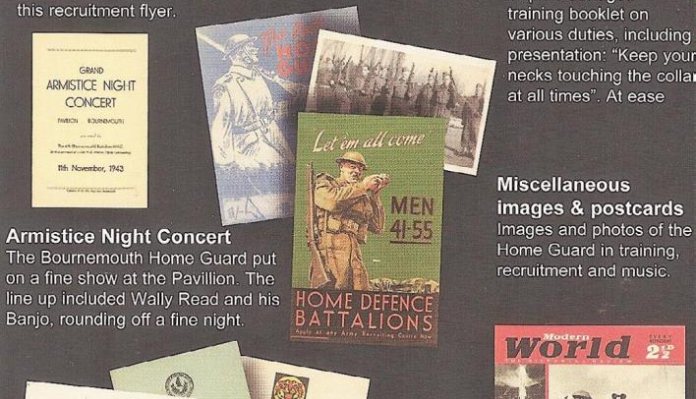 As much as re-enactors like to use original items wherever possible, such things are becoming increasingly difficult to find, especially in good quality. Original items are becoming more expensive, which is only to be expected, due to scarcity.

This problem is affecting everything from uniforms to badges and personal documents. Obviously, original is always best for authenticity, but as this becomes harder to source, re-enactors must turn to alternatives. This means reproduction kit and uniforms and replica documents, which is usually needed by those portraying Home Front and Home Guard.

Whilst most of the reproduction items are up to standard, some products can prove a disappointment because they are not of the quality required for authenticity. Fortunately, however, help is at hand. The Edinburgh-based company of Memorabilia Pack Co. offers a range of special packs containing high-quality replica items, which can be used to support individuals portraying Home Front, or groups depicting units of the Home Guard.

The packs are small, but they contain a wealth of documents and ephemera that re-enactors will find most helpful. The Home Front pack contains replica train tickets, which can be put in wallets or purses and cards that were issued with cigarettes with safety hints in the event of air raids or a gas attack. The leaflets are the type issued by various official departments, such as the Ministry of Food. The recipes sound quite appetising and certainly very healthy options even today.

A copy of ‘Woman’s Illustrated’ magazine, with recipes, helpful hints on ‘make do and mend’ and snippets from the war, along with a replica ration book are the kind of things women at the time would have with them when going shopping. It’s a fascinating mixture and very educational, as well as being functional. In fact, it would be interesting to try some of these recipes from this pack today.

The Home Guard pack is also packed full of very useful items, which groups depicting this role will find handy. There is a 48-page booklet entitled Home Guard Training, which gives instruction on drill, weapon handling, tactics and field-craft, all supported with photographs. A copy of a feature on the Home Guard from the’ Modern World; The Pictorial Review’, contains more helpful information, which can be used for events and displays.

There are forms, paperwork and recruitment items, all of which can be used to demonstrate the kind of documents which helped organise the Home Guard and make it work. Some humorous postcards show a lighter side of things and a copy of sheet music for the song ‘The Last Home Guard Parade’ will be of interest to those who can read music. All the items in this pack can be used for a display by a group depicting Home Guard and, because they are replica, can be passed around for inspection.

Other packs in the series include the Blitz, Children’s War, War at Sea, the RAF at War, Women’s War and several other topics of interest, such as the Suffragettes. Prices vary, but they are not expensive and can be purchased through various outlets such as museums, some National Trust properties and sites managed by English Heritage. If items become lost or damaged they can easily be replaced at little cost. These are replica copies of the real thing and, as such, can be used for instructional purposes, which is particularly handy when visiting schools to present talks. In terms of value for money, these packs are worth every penny.

Such replicas will never replace the real things, but as representations to show what was in circulation during the war, these items are perfect. I know of several re-enactors who already use these items in the way described here and they are perfectly satisfied with the result.