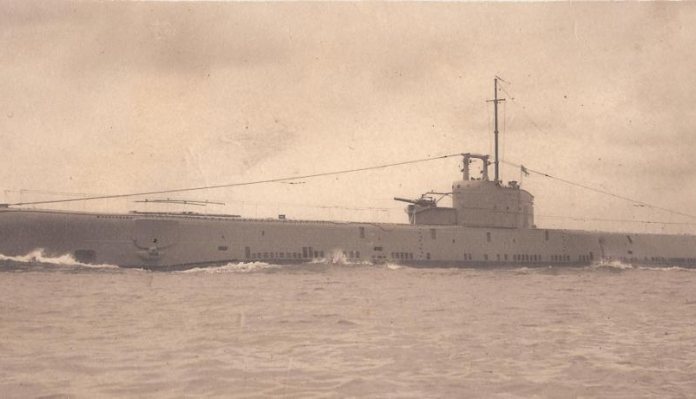 On the 30th of August 1932, HM Submarine Porpoise, Fleet number N41, having been laid down on the 22nd September the previous year. Finally commissioned on 11th of March 1933, she was one of six vessels in the Grampus Class of submarines and would go on to serve in all theatres of the Second World War. The Porpoise weighed 1760 tons on the surface and displaced over 2000-tons submerged. Measuring 989-feet, she had a surface speed of 15 knots and 8.75-knots submerged. Served by a crew of 59 ratings, she carried and impressive armament of a single four-inch calibre deck gun, two machine guns and twelve torpedoes with six firing tubes. When engaged in mine-laying duties, the Porpoise could carry up to fifty mines.

One of the Porpoise’s first patrols was in the North Sea in early 1940, where she was engaged in mine-laying duties. During these operations, she fired on at least two U-Boats and damaged them. The mines laid by the Porpoise also led to the sinking of the minesweeper M3. Between 1941 and 1942, the Porpoise was sent to patrol the Peloponnese coastline, where she sank several vessels, including the Italian ships Citta di Livorno and Ogaden.

In 1942, the Porpoise also torpedoed and sunk the Italian merchant ship Lerici, but missed sinking the Iseo, another merchant vessel carrying supplies. The Porpoise had to take evasive action when she was depth-charged, during which she was damaged by depth charges. By the end of the year, the Italian tanker Giulio Giordani and the auxiliary patrol vessel Fertilia, had been added to the list of targets along with the Italian torpedo boat Generale Antonio Cantore which fell prey to a mine laid by the Porpoise.

It was during this patrol that a tragic incident occurred on the 9th of December 1942. Spotting the Italian merchant ship called Sebastiano Veniero, the captain torpedoed what he believed was a ship carrying supplies for the Italian army. What the captain could not have known at the time was that the ship was carrying 2000 British POWs to a camp. The crew managed to beach the badly damaged ship to prevent it from sinking in deep water, thereby saving the lives of some 1700 captured British troops. Unfortunately, around 300 prisoners were either killed in the explosion of the torpedo or drowned in the flooding of the vessel.

In 1944, the Porpoise was sent to the Pacific theatre of war, where she continued her successful wartime service, by sinking several Japanese vessels, including a tanker called Takekun Maru. In early September 1944, Porpoise supported Operation Rimau, by carrying Australian commandos to the island of Merapas, off the coast of Singapore. On completion of this mission, the Porpoise returned to Fremantle in late October. During its return voyage from Operation Rimau, Porpoise encountered a small convoy, which included a tanker, but she did not engage any of the ships. The Porpoise suffered some minor damage during the patrol to Rimau and it may have been this which prevented her from attacking the convoy.

Nearly three months later, following repairs and refitting, in January 1945, HMS Porpoise was engaged in laying mines in the Straits of Malacca. On the 9th of January, she sent a signal to confirm the successful completion of her mission. After the transmission there was radio silence and nothing further was ever heard from the Porpoise. Post-war records reveal that on 19th January a Japanese radar station on Penang detected the Porpoise and sent a ship to attack. An aircraft was also sent to the area to support the attack. The surface vessel may have damaged her but certainly the supporting aircraft hit the Porpoise with a bomb, causing her to sink with all hands.

After a long and distinguished wartime service, apart from the tragic incident with the Sebastiano Veniero, the Porpoise’s luck ran out. Her sinking also proved to be was the last British submarine to be lost to enemy action in the war. Since then, there has been only one other submarine named Porpoise, which ended her days being used as a target for torpedoes in the mid-1980s.