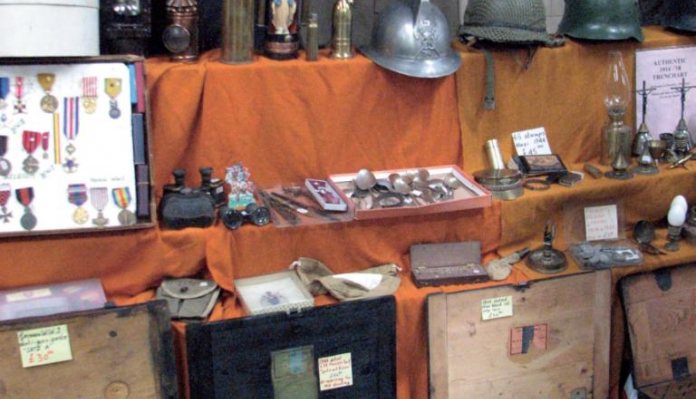 Not until the last reenactment event of the year has finished is it possible to take stock of how many miles have been covered to get to the shows. Throw in visits to militaria collector fairs and the distance, when added up, comes as a surprise. Yet, try as hard as you might, there is always that one last show you want to visit before the end of the year, and then that ‘hard to resist’ one more after that. This happens not just to re-enactors, because collectors fall to this temptation and, indeed, the same goes for all military enthusiasts.

One show which is a ‘must’ to be included on every enthusiast’s list at this time of the year is the second of the twice-yearly Malvern Indoor Militaria Fairs. Held at the Three Counties Showground, Wye Hall (Brown Gate), Malvern, Worcestershire WR13 6NW, the show is organised by Amanda and Graham of Jeeparts (jeeparts-uk.co.uk) and is much more than a militaria fair. It is an opportunity for re-enactors depicting WWII and other more recent events to prepare for the coming season of shows in 2020. The show was held most recently on Sunday, 17 November and with almost 150 traders from Europe and across the UK it attracted a lively crowd.

With everything on offer from books to uniforms and buttons to motorcycles, there really was something for all interests and for a range of budgets, also. This is a venue for dealers large and small and is enjoyed by militaria collectors from novice to the very experienced, young and old and male or female. Re-enactors wearing uniform with items they have collected mingle in with the crowd, as they look for more items to add to their collection, and in doing so are like living displays from a military exhibition. I approached my visit to the show by deciding on a starting point and move around the stalls, stopping every now and then to look at items for sale and talk to traders.

My first stop was at the trade stand of the Home Front Collection (homefrontcollection. com), offering a fine selection of items relating to ARP, WVS, Women’s Land Army and fire service, which is proving very popular with collectors. Re-enactors are also depicting these Home Front services more and more to show something different and the purchases they make at Malvern will be added to their static displays at events. Just a few stalls down the line I next visited the ‘War Years Collection’ a trader who deals with badges, medals and ephemera, including pins and badges worn on the lapel and sold to support charities of both world wars. These colourful and very delicate items are not overly expensive and make for an interesting and unusual collection.

To visit the show is like a trip to a shopping centre which has been specially created for military enthusiasts. Traders selling uniforms hang items on clothes racks so people can browse in the same way as High Street stores and displaying other items such as hats arranged on shelves it is a proper shopping experience. On-Line buying is the simple easy way of purchasing items, but it does not compare with the old-fashioned method of looking at things in person things and asking questions. These points are what make the decision to buy and gives customer satisfaction.

The Eccleshall-based company of World Wide Arms (worldwidearms.com) in Stafford had a good selection of stock on display to satisfy collectors of weapons, including both world wars and earlier periods such as flintlock pistols of the Napoleonic Wars. The quality and condition of the weapons are superb as to only be expected from such a reputable dealer. There were plenty of other dealers offering a range of bayonets and swords which required inspection for those collectors of bladed weapons.

Traders had travelled from across Europe, including Belgium, France and Germany, bringing with them some unusual items, including motorcycles which needed some renovation. For the vehicle collectors attending the show such work would have been relatively easy to make the machines road worthy. Replacement canvas covers for vehicles were available and to mark up your vehicle in the correct unit signs, including German, British and American, Adrian Robins of Stencilade, based at Wootton Bassett in Wiltshire, was on hand.

It is services of this kind which enable owners to turn out with their vehicles looking immaculate at re-enactment events. But these are details which need to be discussed and Adrian, who can be contacted on 07961 843 998, personally dealt with each enquiry, taking down details for orders. This is the kind of personal service which cannot be provided by the Internet. The same is true of Stephen Kiddle of Pegasus Militaria, who supplies reproduction equipment of the highest quality for museum displays and re-enactors portraying both world wars.

Having been a re-enactor himself, Stephen (sales@pegasusmilitaria.com) knows what re-enactors are looking for and how important it is to get things correct for displays. From badges to webbing and complete uniforms, he discusses every enquiry and, like a good quartermaster stores, he can supply everything for the discerning re-enactor. For depicting aircrew, his range includes life vests, known as ‘Mae West’, through to webbing and helmets of all styles. He now has available early pattern British parachute type helmets used in training and used by SOE agents.

Like any shopping experience, customers take their time and the atmosphere is friendly and unhurried. Choices need to be made calmly, as I found out when visiting the stand of Cheltenham-based Q&C Militaria (qcmilitaria.com). Looking at the range of items on display, which included medals and ceremonial daggers, my eye fell on what is often referred to as a ‘Dead Man’s Penny’. This bronze plaque was given to the next of kin to those men killed in WWI. I have several in my collection, but this was the first time I had seen an example to an Indian soldier. I was very satisfied with my purchase and I have added something most unusual to my collection.

As well as the militaria items on sale, there were books galore on subjects from unit histories to biographies of commanders and veterans of operations through to titles giving advice to collectors, which is always helpful. Many of the books are long out of print such as those offered by Anitabooks (abebooks.com) which had travelled down from Hereford. Books are fascinating and people were making purchases, myself included, knowing these are not the type usually available outside specialist shops.

I noticed one stand selling books of very high quality, all of which were concerned with the German army and its allies during WWII. The trader looked familiar and then his name came to me, it was Peter Mooney, one of the oldest members of the Second Battle Group. Peter is himself an author of several specialist titles and using his unique knowledge he has established a publishing company, Loyalty and Honour Publishing, to print and market these valuable histories which include personal accounts of the men who fought on the Eastern Front, Normandy and many other theatres. It is thanks to people like Peter, who recognise the importance such histories are when it comes to presenting events from the German point of view, that we get a balanced account of events. The range of books are handsomely presented, with each title being well-illustrated using many images which have not been seen before. For anyone seeking something unusual as a gift for a military enthusiast making a choice from this range of titles would be perfect. These are not your ‘run of the mill’ titles but a telling of it how is was by the men who were there at the time and it does not get better than that. Details of these books and others in production can be found on the website at: lahpublishing. com.

Then, all too soon, it’s the end of the day and the doors are closed. Everybody begins to drift away reluctantly, but very satisfied.

For those of you who missed this great event, you don’t have to wait too long for the next one. The next date for Malvern to put into your diaries is Sunday, 29 March 2020, so you still have plenty of time to plan your visit. You are guaranteed to have a great time and pick up some terrific collectables. Keep up to date by visiting the website at: militariashows.com.