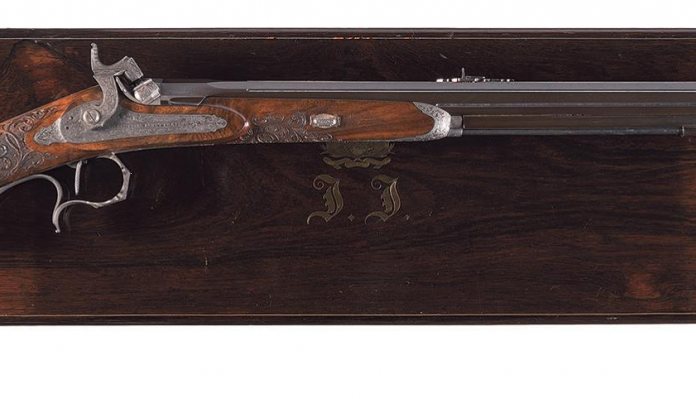 The 2017 June Regional Gun Auction was only the second four-day sale ever hosted by Rock Island Auction Company – the other being held this past February – and if these results are any indicator, the company may be forced to continue its trend of gigantic gun auctions. With tens of thousands of sealed bids pouring in, roughly 25% of the lots had a tie winning bid before the live bidding began. It provided some hot competition, but collectors were more than up for the challenge and it resulted in a realised total over $7 million.

Each day had its own surprises, containing both bargains and lots that inspired prolonged bidding battles, much to the shock of those in attendance. Needless to say, each infused excitement into the days and kept the bidders on their toes.

Thursday set the tone early when lot #1, an engraved Winchester Model 1866, beat its $6500 low estimate to realise $11,500. The surprise of the day came later during lot 671, which contained a Remington Model 8 and a Model 81 rifle. The Model 8, chambered in .35 Rem had an extended magazine marked “Peace officer equipment Co, St. Joseph, MO” and the Model 81, in addition to having a similarly marked magazine had markings on the left side of the receiver that read “Police Gun – Property of Sheriff Dept No 39, Los Angeles County.” The cool factor was off the charts and was recognised by multiple collectors who drove the bids to an $11,500 realised price, far beyond its $1600 high estimate.

The second day of auction again saw solid performance by a variety of lever guns, including the attractive and engraved Henry rifle in lot 2008 that achieved a $25,875 price. The surprises came in a myriad of genres. A fair condition Borchardt pistol with its shoulder stock sold for more than double its high estimate and reached $17,250, and leading a strong performance in the bladed weapons was lot 2527’s set of 25 Case folding knives that brought $10,350 and far surpassed the $2750 high estimate. Russian guns, German guns, knives, hunting rifles, and guns of the Old West – it mattered little as collectors hungrily snapped up anything that came across the block.

Saturday was the largest day of the auction and contained over 1200 lots. Needless to say, our auctioneers were really moving to get through them all in a timely fashion, but it never came at the expense of good prices for our consignors. Lot 4857’s scoped Springfield M1903 bested a $1500 estimate en route to a $7475 payday and proving once again the strong interest in military sniper rifles, a Walther “ac/44” code K43 sniper rifle in lot 4492 shot down a $2250 high estimate before bagging a $5462 final figure. Other German military arms performed strongly throughout the day, as did their U.S. military counterparts, and the Colt Single Action Army revolvers.

The final day had arrived and now it was time for some new genres to rear their head and show their popularity among collectors. Colt revolvers were front and centre all day, and lot 6601 was a perfect example. Containing two Colt DA target revolvers with gold inlaid Rampant Colts, the pair walloped their $1600 high estimate and realised $8050. Kentucky full and half-stock rifles got in on the action early and showed their staying power in lot 6069, when a lot of four of the muzzle-loaders powdered a $3000 high estimate and found a new home also for $8050.

Examples like these go on and on. Military arms, Colts, Winchesters, knives, DA revolvers and more all sold extremely well, making for many happy collectors and consignors. Momentum from Rock Island Auction’s already successful 2017 looks to carry the world’s #1 firearm auction house into their September Premiere Auction, a sale anchored by no less than seven outstanding collections which bring to market a host of fresh, high condition, and historic firearms certain to demand the attention of collectors and investors.

For more information on the September Premiere Auction, please click here or visit the RIA webpage at www.rockislandauction.com.

In Holts Auctioneers’ auction of June 22nd, buyers had the chance to purchase a true pair of left-hand opening 12-bore selfopening sidelock ejectors made by J. Purdey & Sons. Completed in 1892, these guns have been in the Edwards Heathcote family since they were built.

The guns feature sequential serial numbers, 13621 / 2, with 29in. nitro barrels, (No.1 sleeved by W. Powell & Son in 1984 with plain rib, No.2 nitro reproved in 2017), 2 1/2in. chambers, bored approx. 1/4 choke in both (No.1) and true cyl. choke both (No.2), No.2 gun wall thicknesses below recommended minimum, selfopening actions with removable striker discs, left-opening top levers, automatic safeties with gold-inlaid ‘SAFE’ details, arrow cocking-indicators, best fine acanthus scroll engraving with floral bouquets, the fences relief engraved with floral designs on a matted background, retaining very slight traces of original colour-hardening, No.2 with broken mainspring, 14 7/8- inch. figured pistolgrip stocks (No.1 two piece grip) with engraved steel pistolgrip-caps, No.2 stock cracked at head, weight 6lb 15oz. (No.1) and 6lb 12oz. (No.2), in their brasscornered oak and leather case.

Lot 1215 at holt’s June auction: a rare single-trigger Holland & Holland double rifle, as built for HRH the Maharaja of Orchha…

Holts Auctioneers’ Chris Beaumont commented that the Holland & Holland .500/.465 double rifle has to rank as one of the best big game rifles of all time. He added: “Developed in around 1906, the calibre was Holland & Holland’s response to the outlawing in India of the ubiquitous .450 calibre, following the insurrection in India and the Sudan. This example is particularly rare, being made with a single trigger – a very unusual feature on a heavy calibre double rifle, and, according to the makers, was just the second example they had built.”