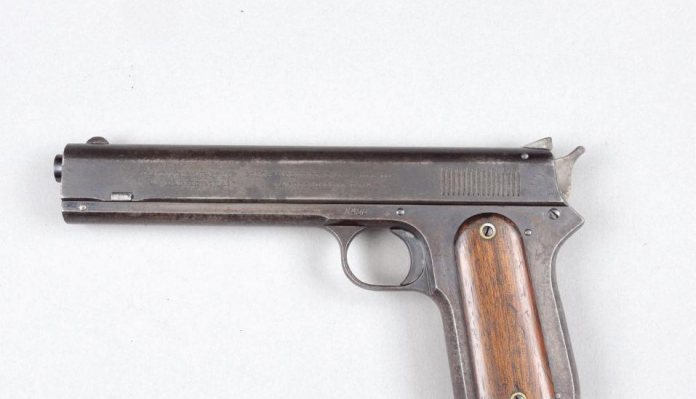 Gavin Gardiner’s December sale – just in time for the Boxing day Shoot – will include a good selection of fine English and European sporting guns.

Among the notable items is a Fine 20- Bore “Supreme Deluxe” model self-opening sidelock ejector gun by A. A. Brown & Sons. Engraved with Celtic strap work around highly detailed scenes of game birds in flight, the maker confirms that the gun was ordered in July 1994. It was engraved by W. Marshall, an engraver based in Scotland and it was completed in July 1996. The gun appears relatively little used. It is estimated at £8,000- £12,000.

The sale will include a private collection of over 50 heritage handguns. There are many rare and unusual pieces in the group including a scarce Webley & Scott 9mm 1909 model self-loading pistol. Produced for a very short period, little over 1600 examples are known to have been built before production ceased in 1914, and few remain today. It carries an estimate of between £800 -1200.

A scarce Colt .38 model 1900 self-loading is another important piece, being the first self-loading pistol designed for Colt by legendary firearms designer John M Browning. This early example remains in good condition, and the model was only in production for just over two years so examples are scarce today. It also carries an estimate of £800-1200.

A rare Colt .455 New Service Target model is also included in the collection, being produced only for the English market and being a favoured model with Bisley marksmen prior to WW1. This example has metford rifling in the barrel and carries an estimate of £500-800.

Overall, the auction of more than 200 lots of vintage sporting guns, rifles and shooting accessories, is the only sale of Sporting Guns to be held in the heart of London’s Mayfair and will have a strong section of 12-bore Sporting Guns by England and Scotland’s finest makers. The sale will include a strong section of accessories and more curious items – which could make wonderful Christmas gifts. gavingardiner.com

Holts Autumn auction at Holly Hedge House, Blackheath showed another strong result with a percentage of just shy of 70% of the 686 Lots offered sold on the day and with a hammer price totalling just over £900,000.

The Holts September auction saw many strong prices realised with several lots exceeding their estimates. In the Books, Pictures and Taxidermy section, rare books made good prices. Lot 3, “A Hunter’s Wanderings In Africa” by Frederick Selous estimated at £400 - £600 made £550 and “The Matabele Campaign” by Baden Powell estimated at £200 - £300 made £320.

Good provenance proved its worth as always, with some lots in the auction having quite exceptional historical value or cultural interest. Lot 900, a B.S.A.C. flag draped over the coffin of Cecil Rhodes as he laid in state in Bulawayo in 1902 realised a hammer price of £5000 and Lot 1025, a Colt pistol formerly the property of Sir Arthur Conan Doyle sold for £4000 (more than double than would be expected for a similar example without the provenance) and Lot 230, the reproduction brass regimental SAS ‘Winged Dagger’ insignia, formerly the property of Colonel K.G. Harvey (S.A.S.), ICD, DSO, MBE, ED., sold for a creditable £3800 against its £3000 – 5000 estimate. The Zulu knobkerrie with links to the Battle of Kambula (1879) and being offered as Lot 200, flew past its estimate of £300-500 to be finally hammered down at £1300.

The breakdown of the buying market again did throw up some changes, with the UK supplying approx. 42%, of the total value sold (significantly less than the customary 50-60%) and Continental Europe accounting for just 20% of the sale by value (compared to nearly 45% in the March auction and 23% in June). The ‘rest of the world’ increased their participation to the tune of the 38% of the total hammer price. Following the auction, a full list of the realised prices is now available to download: holtsauctioneers.com/admin/ A0918_prices.pdf.

The next auction will be held on 13th December 2018 at Holly Hedge House, Blackheath, London SE3 0QZ. holtsauctioneers.com

The third time was an absolute charm for the Antique Arms Fair, with Olympia to play host again next year…

September saw the third Antique Arms Fair at Olympia; and a great success it proved too. Many sales were made, and a point of particular interest was the purchase of a pair of duelling pistols from dealers West Street Antiques to a new collector.

Now looking forward to the next fair, on 2nd March 2019 and entitled ‘The Fourth Antique Arms Fair incorporating the Park Lane Arms Fair’, it will be held in the same location at Olympia.

Thomas Del Mar comments: “I am excited about this enhancement to the already successful fair and feel that the considerable experience and existing reputation of the Park Lane Arms Fair will continue to help the fair grow from strength to strength.”

David Oliver, founder of The Park Lane Arms Fair, comments: “I held my first London Fair at the Dorchester Hotel in 1982 and subsequent annual events at the Marriot Hotel, Grosvenor Square, since when we have enjoyed an outstanding reputation for quality exhibitors and a scholarly catalogue. I am delighted that Thomas Del Mar and I have come to this agreement and particularly pleased to have been invited to continue to work on the fair catalogues.” antiquearmsfair.com