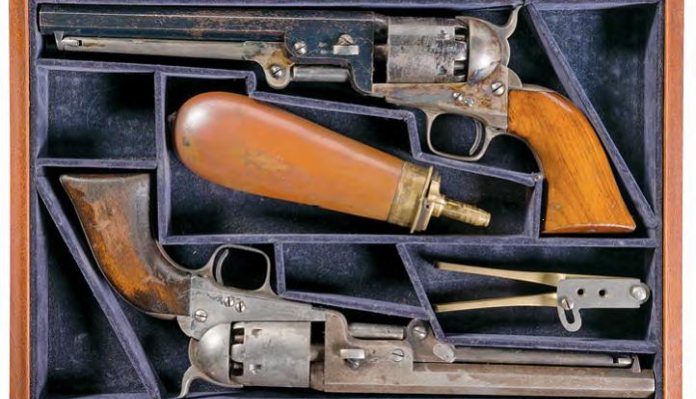 In recent years, the Regional Firearms Auctions at Rock Island Auction Company have become colossal four-day events. These sales grew so popular and large that a fourth day was necessary to fit in the thousands and thousands of modern and collectible firearms. We are pleased to announce that the 2018 February Regional Firearms Auction will continue this trend and, in four days, will include over 10,000 firearms for collectors of all eras and genres.

Taking place February 15th - 18th, this gargantuan event will host a wide range of collectible arms, military weapons, sporting arms, self-defence guns, hunting pieces, knives, daggers, uniforms, books, ammo, and more. We have even conveniently scheduled our Preview Day on Valentine’s Day, in case you want to make a romantic foray with your sweetheart to a roomful of guns. We jest, but if you have not attended a Preview Day at RIAC, it’s an experience you can’t miss. Every single gun in the auction is on display for you to pick up, touch, inspect, shoulder, and aim. People have taken to calling it “The Museum You Can Touch”. Only in this museum, you could take an item home.

Sometimes it’s hard to put over 10,000 guns in perspective. It’s a staggering amount of firearms! So let’s break down some numbers to help get a better grasp on it. In this auction there are:

And thousands more from over 900 different manufacturers! It is an abundance of arms for every type of shooting or collecting under the sun.

Our Regional Auctions are made up of affordable antiques, beginning collector’s items, usable sporting arms, and many non-firearm lots. A majority of the lots have multiple firearms. A Regional Auction has routinely consisted of approximately 3000 lots with as many as 10,000 firearms in those lots. We hold two Regional Auctions per year, one in the summer and one in the winter. The concept of the Regional Sale was initiated by the demand that our customers developed for the ‘everyday collector’ type guns. Were these guns placed in a Premiere Auction, they would simply be overshadowed. These guns need to be seen in person as we keep the description to a minimum and use a rating scale for the condition encouraging the buyer to view the items in person. We produce approximately 10,000-13,000 black and white catalogues that are sent to potential bidders all over the world.

These auctions are comprised of firearms such as sporting and hunting firearms, manufacturers such Browning, Winchester, Ruger, Colt, Remington, Smith & Wesson, plus Japanese and European military firearms. You will also find firearm related books, holsters, swords, parts, leather, ammunition and more. This is also an auction for antique and highly collectible items. Each item is listed with a headline, high and low estimates, condition rating, and photo. As with our Premiere Auctions, our website features the entire Regional Auction catalogue of items and is searchable by model, serial number, manufacturer, lot number, keyword, and more. All items are viewable in colour online and all guns have both sides shown!
www.rockislandauction.com

Mark Wednesday April 18th in your diaries, as we look ahead to Gavin Gardiner’s initial auction of 2018…

Gavin Gardiner’s first sale of 2018 is highlighted by two magnificent guns that showcase the wonderful gunmaking talent in the UK today.

A collection of around a dozen guns by London gunmaker Frederick Beesley includes the magnificent Presentationquality Dinosaur gun, among the last guns completed by this maker in 2006 and appears virtually unused. Estimated to fetch £30,000-£40,000, the gun is engraved by Bill Sinclair and its construction utilises the talent of many of the finest gunmakers working in the trade today. Comprising a Holland & Hollandtype self-opening mechanism, the left lock is engraved with a mammoth against a wooded landscape, while the action base is adorned with a flying pterodactyl above a smoking volcano and the right lock is engraved with a running deinonychus.

From over the border is a fine pair of 12-bore ‘Creative Art’ engraved single trigger round action over-and-under ejector guns by Scottish maker David McKay Brown. Engraved with large Scottish scrollwork, the maker’s name is signed within a panel. Carrying an estimate of £30,000-£50,000, the maker confirms that the guns were built in 2003 and appear relatively little used and retaining virtually all of their original finish.

The auction of more than 200 lots of vintage sporting guns, rifles and shooting accessories, is the only sale of Sporting Guns will be held in the heart of London’s Mayfair and will have a strong section of 12-bore Sporting Guns by England and Scotland’s finest makers.

The next auction will be held on August 27t at the Gleneagles Hotel, Perthshire, Scotland. www.gavingardiner.com