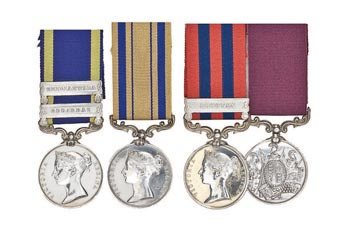 At Wallis & Wallis, they have always held an auction in January and each time it has been a great success with this sale proving to be no different with prices in most areas exceeding expectations. The room was full and, as with our other recent sales, this one saw high prices being paid by both trade and collector, again showing that despite many areas of the antique market remaining poor this subject remains incredibly strong.

In addition to the more traditional bidding there were also more Internet bidders, many of whom were successful in buying Lots without the necessity of having to attend the Sale in person.

The following items are just a selection of a few of the most interesting Lots that were sold.

The auction was varied in its contents, but we start with a large section of medals and this Punjab 1849 Medal with two clasps for Chilianwala and Goojerat (J Hayslem, 3rd Lt Dragns). The condition was VF with a bright finish and very minor edge nicks. It sold for £400.

A pair comprising an India General Service Medal 1854 with one clasp for Bhootan (456 Gunr H, Ashton 3rd By 25th Bde RA) came together with a Victorian issue Army Long Service & Good Conduct Medal, small lettering (engraved 33350 Gun H Ashton B/1 Bde RA). They were in VF and GVF condition respectively and sold for £310.

Then we have an India General Service Medal 1854 with one clasp for Perak (engraved in sloping capitals 1781 Pte T Mahoney 1/3rd Foot). It was in GVF condition and went for £350.

A good officer’s gilt 1874 pattern glengarry badge of The 16th (Bedfordshire) Regiment. It was a crowned star type (444) and was in crisp condition. It took £190.

Finally there was a Victorian officer’s silver plated helmet plate of the 1st Volunteer Battalion The Royal Berkshire Regiment, with red cloth centre backing, it was a good clean example and went for £260.

Now on to edged weapons with a Royal Navy Midshipman’s dirk. Made around 1856 it had a broad 12-inch long blade, which was double edged for half its length. It was etched ‘Thos Walton, Gosport, Outfitter to HRH Prince Albert, HRH The Prince of Wales and Prince Alfred, and HSH Prince Ernest of Lienengen’, and also finely etched overall with crowned fouled anchor and crowned VR cypher within scrolled foliate frosted panels.

It had a regulation brass hilt with lion’s head pommel and wirebound white sharkskin grip and was in its leather scabbard with engraved locket and chape. The blade retained virtually all its original finish but surprisingly most gilt was rubbed. Nevertheless it proved popular and after a number of strong bidders dropped out it was finally left to sell for £1750.

Next we have a naval cutlass circa 1800 with single edged blade measuring 28-inches long. The handguard was in sheet steel and of figure of eight shape with an unusual fluted iron grip. It had been cleaned but was unusual and so fetched a good £500.

This next Lot looked very impressive and was a most striking French Revolutionary period sidearm, with slightly curved and fullered blade measuring 27-inches long, marked ‘B’ and unclearly dated ‘1804’ at the forte. It had a superb heavy brass hilt, the crossguard with hound’s head finials and lion’s head centres, plain shallow pistol shaped grip and fearsome cockerel’s head pommel. It came with an associated brass mounted leather scabbard and proved very popular, selling for £1300.

Moving on to airguns now with a pre-war New Model .177” Webley Mark I air pistol, number 64589, the breech plug with a small warning stamp and locking pin, and with black grips. It was just slightly worn and well reblued overall with just minor bruising.

Next is a good post-war pre-1958 .177” Webley Senior air pistol, batch number 150, with white inlay to the left
hand markings, the barrel catch with serial number, the flat breech plug with warning, and with ribbed frame strap and brown grips. It retained virtually all original blued finish (some very minor scuffing) and came in its original pre 1958 carton with pale green label, containing two targets and a parts sheet. It sold for £250.

Finally there is a .177” Webley Service Air Rifle Mark II series 3, number S7356, the butt impressed ‘J Moore – Bath’ and branded with initials ‘W T’. It showed traces of original finish overall but the intercepting safety sear was missing and there were some minor wear and defects. Nevertheless this model is popular and it sold for £500.

It was fullstocked with steel trigger guard, ramrod pipes and long spurred butt cap with silver grotesque mask finial and with openwork silver sideplate incorporating laureate bust and silver escutcheon surmounted by coronet and incorporating military trophies. There were some repairs all over and it went to a foreign buyer for £925.

A scarce French 12-bore Model 1777 cavalry trooper’s flintlock belt pistol drew much attention. The 71⁄2-inch barrel with faint traces of regimental markings at the breech, the brass frame stamped with coronet over ‘A’ and engraved ‘Maubege’. It had a regulation walnut butt with brass buttcap, steel belt hook and ramrod, which had been replaced and the steel parts have been pitted and cleaned bright. It was bought by a foreign buyer for £625.

Another French pistol, this time a scarce French 20-bore Model An IX Gendarmerie flintlock pistol, also fetched a good price. It had a 5-inch barrel with breech marked ‘M XIE’ and tang faintly engraved ‘M an 9’. The lock was engraved ‘Mauberge Manufr, Nle’ and the walnut fullstock had regulation steel mounts. The tip of the muzzle band retaining spring was missing and the cock and ramrod were good replacements. Nevertheless it was scarce and made £675.

Finally in firearms we move to America and a traditional favourite of those who wish not only to display their antique guns but also to shoot them. A six-shot .44” Remington New Model Army percussion revolver, number 19685, the barrel bearing 1858 patent date and address but not the ‘New Model’ marking. It had the standard plain walnut grips, one with illegible traces of inspector’s initials.

The rifling was not perfect by any means and would have benefited from a little loving care after which it may have proven modestly good to shoot. It retained some original blued finish, mainly to the frame and rammer and there were vice marks to the barrel and small patches of light pitting. It made £975.

The next sale at Wallis & Wallis is the Spring Connoisseur Sale on 29th April – 30th April 2014. For further details all future sales at Wallis & Wallis, phone 01273 480208 or visit the website at http:// wallisandwallis.co.uk