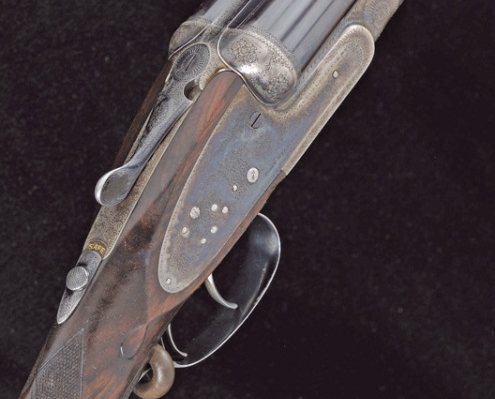 A magnificent pair of Kell engraved 12-bore sidelock ejector guns by London maker John Wilkes, made for the renowned collector and shot W.W. Dowding – which were completed exactly 79 years and 1 day ago were sold for £53,900 – double the lowest estimate (£25,000-35,000 [Lot 97]) – in Gavin Gardiner Ltd’s annual auction of Fine Modern and Vintage Sporting Guns, which was held at the world-famous Gleneagles Hotel, Auchterarder, Perthshire, Scotland on Monday, August 25th, 2014. After fierce competition in both the saleroom and on several telephones, the guns were bought by a private collector.

As Gavin Gardiner explained: “The guns were completed on August 24, 1935 for the renowned collector and shot W.W. Dowding, who asked Wilkes to build him the very finest pair of guns that the London gun trade could build. Dowding was Wilkes most important retail customer and the guns that they built for him are a testament to the skill of this maker, who is really only well-known to a relative few. Using all of the finest workers in the trade, including legendary gun engraver, Harry Kell, the guns cost over £240 when completed and are renowned in Wilkes history as the finest pair of guns that the firm ever built.”

Elsewhere in the sale, a fine pair of 12-bore Galeazziengraved ‘MX8-SCO Extra Gold’ model single trigger over and under ejector guns by Perazzi – which have been virtually unused – sold for £52,063 after competitive bidding on the telephones and in the saleroom. The guns were inlaid with gold game and signed by L. Galeazzi. They had been expected to fetch £24,000- 28,000 [Lot 223].

The third highest price was paid for a fine 20-bore single trigger over and under ejector gun by Holloway & Naughton dating from 2005, which remained relatively little unused and was built using the classic Boss-type self-opening action. It sold for £39,200 against an estimate of £30,000-40,000 [Lot 228].

Also of note was a fine Tallettengraved 12-bore self-opening sidelock ejector gun by James Purdey & Sons sold for £19,600 (estimate: £10,000-15,000). Profusely engraved with foliate scrollwork and highly detailed scenes of game birds against realistic landscapes, the maker confirms that the gun was originally built in 1908 and that it was a gun of standard specification. However, the gun was purchased in 1994 as an engraving project and demonstration piece for Bradley Tallett and extensively reengraved in the classic style by the talented young engraver, who is now a well-known gun engraver in his own right, with guns by Purdey being among his most famous works [Lot 113].

The Annual sale at the world-famous Gleneagles Hotel – which is now in its 47th year – comprised 228 lots of fine sporting guns, rifles and shooting accessories dating from 1860 to the present day by world-class makers such as Purdey, Holland & Holland, Boss & Co and Westley Richards.

Gavin Gardiner Ltd’s next auction will be on December 10th 2014 at Sotheby’s New Bond Street, London. For further information on the auction, please visit www. gavingardiner.com or call 0044 (0)1798 875300. You can follow Gavin Gardiner on Twitter @GavinGardiner

This auction included the continuing sale of a single owner medal collection.

We start with a pair — Naval General Service 1915, George VI issue with three clasps for Malaya, Cyprus, Near East (RM 8749 P.N. Thompson Mne RM); and a General Service Medal 1962 with one clasp for Malay Peninsula (Captain P N Thompson, RM). Mounted court style they were in very fine condition and sold for £975.