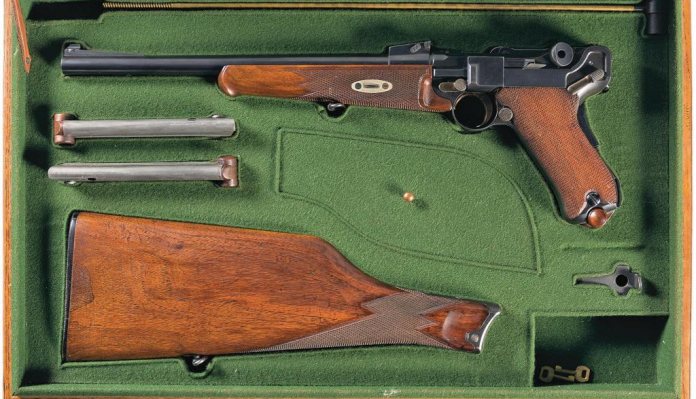 The 2018 February Regional Firearms Auction at Rock Island Auction Company was a fantastic way to start off the New Year. Over 10,000 guns found new homes in just four short days and resulted in a $9.2 million realised total for this massive sale! This is the largest total for a Regional Auction in RIAC history and clearly demonstrates the growing market for collector firearms, the passion of collectors, and the formula for success cultivated by the Midwest auction house. In addition to the outstanding auction result was also the rise of RIAC’s own online bidding software, RIAC Live. Released late in 2017 to a limited audience, RIAC Live allows collectors to bid live online in real time with streaming audio/video. February’s sale was the first major auction where RIAC Live was available to the public and the response was overwhelming. Hundreds of bidders were online from the opening lot to the closing hammer bidding and winning in a real-time auction.

The first day of auction was on Thursday, but with the high participation one might have thought it was the weekend. The day started quickly and saw success in a number of genres. A custom, presentation style, gold inlaid DWM Model 1902 Luger Carbine in lot 341 achieved $40,250 in spite of its $22,500 high estimate. Not long thereafter in lot 518, from the Bruce Canfield Collection, a Springfield U.S.M.C. Model 1903A1 sniper rifle with its scope and scope case embodied the recent surge in U.S. military firearms’ prices by soaring past its $7500 high estimate en route to a $31,625 realised price. The day’s half way point saw an engraved A.H. Fox XE Grade side-by-side 20-gauge in lot 725 bring $12,650 – more than doubling its $6000 high estimate. Rounding out the genres and the day was lot 967 and its two Galil semi-automatic rifles which found a $8050 realised price instead of its $3000 high estimate.

Friday was determined to start off just as quickly as Thursday and so the very first item of the day – a Volcanic carbine by New Haven Arms in lot 2000 – wasted no time in surpassing its high estimate at $23,000. Friday even had its own Springfield M1903 with scope bases and U.S.M.C. barrel in lot 2785 that also far surpassed its $1300 high estimate and sold for $10,925. The second day of sale also saw some classic Colt revolvers perform well, such as lot 2453’s second-year production, Ainsworth inspected, Colt Single Action Army cavalry revolver which exceeded its $4500 expectation for a $10,350 price.

Saturday marked the third day of the sale and it was a wild ride. Collectors using RIAC Live were fighting hard for the items they wanted and it made for an exciting day. However, the theme for Saturday still revolved around perpetual collector favourite Colt. It didn’t matter whether it was percussion revolvers, Single Action Army revolvers, or powerful double actions, everybody wanted a piece of the action. Case in point was lot 4029 and its engraved First Model Dragoon with relief carved eagle grips that crossed the block over its $7000 high estimate for $10,350. Representing the strong SAA showing was lot 4390’s pair of cased and engraved First Generation SAA revolvers with their relief carved steer head grips that roped a $7475 price over their $4500 high estimate. Lot 5036 contained a Colt Python revolver that showed the snake guns’ new higher prices are still holding strong as it banged the gavel for $3450.

Thankfully, on the final day of a long auction, we had more than enough buyers resolved to make the weekend a success. That became apparent when the first lot of the day, lot 6000 and its remarkably well-done reproduction of an engraved and silver plated Henry rifle, readily found a collector willing to pay $16,100 to make himself the new owner. Within the hour a collector realised that the cased and engraved Colt Second Model Dragoon in lot 6075 was one of only 2700 ever made and promptly won the scarce revolver for $12,650. One of the weekend’s more unusual items was a Remington Model 400 Kiln Gun with its case in lot 6663. Made to fire 8-gauge slugs to break up the slag rings that form inside industrial kilns, this working-man’s gun was in surprisingly good condition and went home with the most dedicated Remington collector in the room for $11,500 – easily knocking down its $3250 high estimate.

Having the largest total ever for a Regional Auction is something that lends a great deal of pride. The fact that our very own RIAC Live had more active users and more winners than far more established industry giants is even more cause for celebration. However, the thing we take the greatest joy in is the competition and number of bidders. Sure it’s good for business, but more importantly it’s good for the hobby of collecting and good for those who wish to help preserve the history behind these items. It shows that millions of like-minded firearms enthusiasts are out there with us enjoying guns and the heritages they represent. Thank you to all our consignors and clients for a tremendous start to 2018. If you liked this auction, wait until you see what else we have in store for 2018!