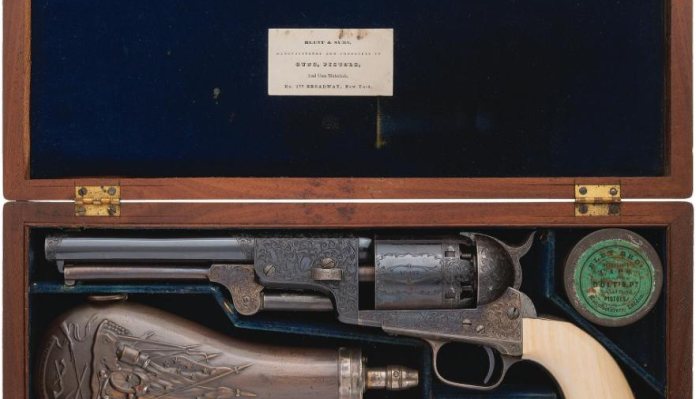 In the months that led up to it, the May 2019 Premier Firearms Auction had shaped up to be an absolute colossus of an event. The Millikin Dragoon served as flagship and was flanked by powerful military vehicles, lifelong collections, pristine condition pieces, and inconceivable rarity in nearly every genre. It was an event absolutely jam-packed with exciting pieces collectors could not wait to get their hands on.

While 2018 was a record year for absentee bids with 118,000 received, already in 2019 over 55,000 have been received after just two major auctions. We also saw record web traffic for this auction with 3.6 million catalogue visits as well as record numbers of bidders, winners, and watchers using our RIAC Live software. Winning bidders could be found in all 50 states as well as 17 countries. To say participation is excellent would be an understatement, as more and more people find that high-quality firearms continue to be a fantastic investment.

The excitement was rife in the air, evidenced by the outstanding results achieved yet again by Rock Island Auction Company. This time the realised total for the auction reached $20 million, a remarkable and appropriate outcome for an event positively alive with extraordinary firearms.

Day 1 wasted no time getting right into the thick of things. Lot number 8 offered the Millikin Dragoon to the collecting public. In and out of the world’s finest collections for the last century, it gave all in attendance a jump-start when the bidding began at $900,000! After a back-and-forth battle for the right to own this extraordinary, artisan Colt, the bidding gradually slowed until only one remained. The Millikin Dragoon sold for $1,667,500 to an elated bidder who knew a true treasure when he saw one.

Other exceptional results on Day 1 included an extremely rare Armstrong & Co. British Gatling gun that cranked out a $218,000 realised price, a Dance & Bros. Confederate revolver that bested its high estimate to find $195,000, and a stunning, cased Ames Manufacturing Co. Civil War presentation sword that also topped its high estimate and sailed to a $126,500 sale price.

Those that assumed the second day would serve as a respite after such a boisterous first day were in for a surprise. Much like the day prior, the activities were off with a shot when a near-mint Colt Baby Paterson, offered in the eighth lot of the day, found an impressive $644,000 realised price. Around mid-day, massive military vehicles were started outside, the door were flung open wide, and the auction hall was filled with the powerful rumbling of tanks before these impressive items crossed the auction podium. The effect must have worked – the M47 Patton main battle tank rumbled to $322,000, the M16 half-trackshot down a $97,750 realised price, and an outstanding 1957 Chevrolet Model 1503 military staff car cruised to a $46,000 pay day.

German military items also gave enviable performances on Saturday. A presentation 1902 Luger carbine, given from inventor Georg Luger to machine gun inventor Hiram Maxim, became the subject of an absolute bidding slugfest. With a low estimate of $35,000 the gold inlaid pistol astounded everyone in the auction hall as the bids climbed ever higher. When it was finished, the prized piece had exceeded its low estimate more than 12-fold with a $425,500 realised price and found a new collection to call home. Additionally, a factory engraved and chromed Walther PP, bearing Germanic pagan runes and an “HH” monogram attributed to vile SS Chief Heinrich Himmler, far surpassed its $250,000 high estimate before settling upon a $356,500 sale price. To list all the remarkable prices achieved on Saturday would require a small book! It was an incredible day at auction.

However, the surprise of the day came in lot 3737 with a superb condition, 1941-dated police Luger with two matching magazines, all bearing the serial number 3y. Initially given an estimate of $8,500 – $14,000 it quickly left those figures in the lurch as the bidding quickly became heated. Mouths were left agape and astonished glances were exchanged before the enviable Luger settled at $63,250 – more than seven times its low estimate.

As you can see, there wasn’t a moment to rest in this auction that was absolutely teeming with world-class firearms. From the very first lots to the final hours on the last day, gun collectors were given untold opportunities and they responded as such. A hearty and sincere thank you is extended to all who helped make this event the large success it was: consignors, buyers, bidders, attendees, and our friends on social media who help share the photos, videos, and stories of these incredible arms.

Rock Island Auction Company’s June 20 – 23 Regional Firearms Auction will have more guns that ANY other auction in our entire history. There are more than 10,000 firearms in this positively massive four-day event! The selection and variety will be better than ever as collectors flock to the biggest gun event of the summer.

Of course, there will be the everincredible selection of collectible firearms: Winchester, Colt, military arms from the U.S. and abroad, Civil War arms and more. What many people don’t know is that RIAC’s Regional Auctions also offer an outstanding assortment of “normal” guns too. There are firearms for every shape and purpose! Rifles and shotguns for hunting, pistols for plinking and EDC, modern sporting rifles for fun and home defense, and anything else you can imagine. In addition to modern arms, there are also classics from decades past, bridging the gap between antiques and today’s guns. Classic Smith & Wesson revolvers, beautiful Winchester bolt actions, target pistols, and a smorgasbord of yesteryear’s sporting arms and designs from some of firearms most prolific inventors. rockislandauction.com