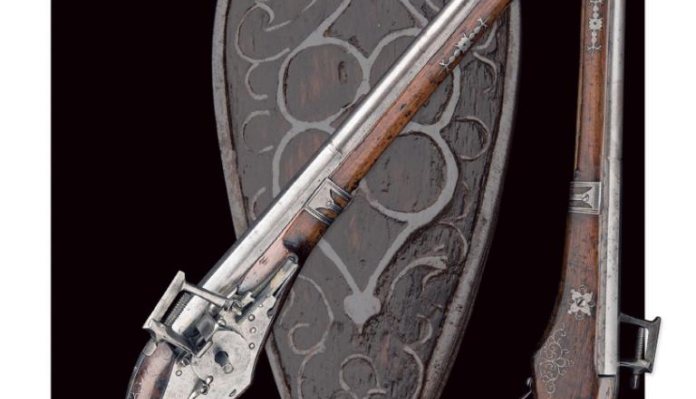 Gavin Gardiner Ltd’s auction of Modern & Vintage Sporting Guns at the prestigious Gleneagles Hotel, Auchterarder, Perthshire on Monday, August 27th, 2018 at 5pm will include the wonderful ‘Phoenix’ Gun, which was completed in 2012 by world renowned engraver Malcolm Appleby MBE. The 12-bore side lock ejector gun has an estimate upon request.

Gavin Gardiner said: “I am delighted to be offering this gun by Malcolm Appleby, who is so highly respected by the gun trade. Many people will remember the ‘Crocodile’ gun, which was a magnificent Malcolm Appleby-engraved 12-bore round-action ejector gun by David McKay Brown, that sold for £48,000 in my auction at Gleneagles in 2009.”

Highly acclaimed Goldsmith and foremost Gun Engraver Malcolm Appleby (b. 1946). Appleby, who lives in Perthshire – just 40-miles from Gleneagles has had many prestigious commissions including the Scottish Lace Gun; the Woodcock Gun; the Raven Gun (for the Royal Armories) and the Pike Gun (which sold at Sotheby’s Gleneagles in 1994) which were all inspired by nature. In addition to this, he has had many important commissions include the engraving of the orb on the Prince of Wales Coronet, the King George VI and Queen Elizabeth Diamond Stakes Trophy for De Beers, the 500th anniversary silver cup for the London Assay Office; a major silver cmmn (cup and cover) for the Royal Museum of Scotland; the seal for the Victoria and Albert Museum and the silver centrepiece for the New Scottish Parliament. He also has examples of his work in many collections throughout the world. He was awarded the MBE in the 2014 New Year Honours for his engraving skills.

This year’s sale at the Gleneagles Hotel, which is in the 51st year, will include around 200 lots of Fine Modern and Vintage Sporting Guns, Rifles and Accessories from 1860 to the present day. It is held two weeks into the Grouse Shooting Season. www.gavingardiner.com

Holts Auctioneers discover campaign chest belonging to The Duke of Wellington’s Aide-de-Camp, killed at the Battle of Waterloo…

It looked like an old wooden chest but painted on the side was LT. COL HONble A, GORDON. A private vendor had brought the chest to Holts and it turned out to be none other than a campaign chest belonging to Sir Alexander Gordon (1786-1815) who was killed at the Battle of Waterloo in 1815.

Alexander Gordon, the 3rd son of Lord Haddo, joined the army in 1805 and fought in the Peninsular War in Spain during the Napoleonic Wars. In 1809 he became aide-decampto the Duke of Wellington and on the 18th June 1815 at the Battle of Waterloo died after his leg was blown off. Such was the respect that Wellington had for him, he offered Gordon his bed where he subsequently died. In a letter written the next day to his brother Lord Aberdeen, Wellington wrote: “He had never rendered himself more useful and had never distinguished himself more than in our last action” (The Battle of Waterloo).

Holts have put a price estimate of £200-£300 on the chest but it could go for considerably more thanks to the Waterloo and Wellington connection, it will feature as Lot 1088 in Holts 21st June Auction of Fine Modern & Antique Guns. www.holtsauctioneers.com

Holts have announced that their next auction of Fine Modern & Antique Guns will be held at 10am on 21st June at Holly Hedge House, Blackheath…

This is the second time that Holts will hold an International auction at their new location in Blackheath. The March auction was very successful with record numbers of people attending who were able to take advantage of the free parking, on-site catering as well as enjoying the drinks evening. Having experienced the benefits of the new location many more have said they are planning to return for Holts summer auction on 21st June.

The catalogue is now online at www.holtsauctioneers.com and already features some outstanding items for the sportsman as well as the collector:

Lot 455 - A rare 38-bore wheelock pistol of Brescian form circa 1660 in fine condition and finished with decorative metal work to grace any collection of classic arms.

Lot 505 - A fine cased .451 (Whitworth) percussion three band rifle by Manchester Ordinance & Rifle Co. This is an outstanding example of a sought after item that retains much original finish and is complete with a pocket case fitted with a range of alternative sights and tools. It is on offer with its original full-length banana shaped oak storage case, a rarity in itself.

Lot 1600 - For the discerning sportsman, a rare opportunity to own an example of contemporary British gunmaking at its very best. A fine and unique Charles Lee engraved 12-bore single trigger over and under Purdey style sidelock ejector by Scottish gunmaker David Mackay Brown.

The gun is referenced in Donald Dallas’ definitive history of the maker ‘David McKay Brown - Scotland’s Gun and Rifle Manufacturer’ as being one of just nine sidelock guns ever built by him and the only example in an over and under configuration.

There is also militaria, percussion and flintlock arms, edged weapons, sporting themed works of art and sculpture, a full range of modern and vintage accessories alongside classic, vintage and modern sporting guns in the Holts auction. There are 4 ways to bid: