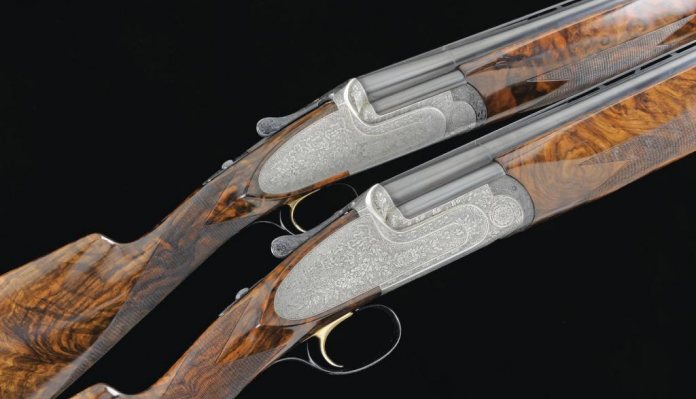 Gavin Gardiner’s first sale of 2019 will take place in the heart of the gunmaking district of London (Mayfair) and will include a good selection of fine English and European sporting guns.

Among the notable items is a fine pair of 12-bore single trigger sidelock ejector guns by highly desirable London-makers Boss & Co, built in 1923. The guns have 28-inch replacement barrels by the makers fitted in 1990 and remain virtually unused since. They carry an estimate of £25,000 to £35,000.

Elsewhere, a fine pair of 12-bore single trigger MX12 SCO single trigger over and under ejector guns, built in 1991 by Italian Makers, Perazzi. The guns have 26-inch barrels and remain little used from new and carry an estimate of £15,000 to £20,000.

Another interesting British piece is by John Wilkes. A .358 Win Mag boxlock non-ejector rifle which was built in 1923. The gun is fitted with replacement 26-inch barrels fitted by John Slough of London, and extensively refurbished and refinished at the same time. The rifle has been little used since and carries an estimate of between £3000 and £5000.

While dating from 1939, is a fine lightweight 12-bore single trigger boxlock ejector gun by Westley Richards, with 28-inch barrels with 2 1/2-inch chambers, about 1/4 and full choke borings and a dolls head extension, the frame and patent top lever has fine scroll engraving and retains much original hardening colour. It is estimated at £1000-£1500.

Overall, the auction of more than 200 lots of vintage sporting guns, rifles and shooting accessories, is the only sale of Sporting Guns to be held in the heart of London’s Mayfair and will have a strong section of 12-bore Sporting Guns by England and Scotland’s finest makers as well as section devoted to accessories and more curious items. gavingardiner.com

Rock Island Auction Company’s 2019 February Regional Auction was nothing short of a colossal four-day event. With nearly 10,000 guns offered and over 5100 lots up for bid from February 14-17, RIAC felt the Valentine’s Day love with one of their best Regional Auctions to date.

Bidding before the start of auction hit astounding number with around 30,000 sealed bids. From the packed auction hall to the numerous phone and online bidders, RIAC had tens of thousands of bidders from around the world battling for various items. Plus, the auction hall capacity was nearly doubled all weekend long with over 300 bidders participating live online using RIAC Live.

Highlights include a “1 of 1000” factory inscribed Winchester Model 1873 rifle that sold for $37,375. It was one of the 700 different Winchester firearms for sale in during the Regional Auction. Another rifle that fared well was 65th Indiana Volunteer Infantry Civil War Henry rifle which brought $25,875 on the third day of auction. It was one of two well-preserved New Haven Arms rifles that sold in the auction.

For the wheel gun and Colt enthusiasts, a beautiful pair of factory engraved and cased Colt Model 1851 Navy revolvers stirred up a bidding war, pushing the set’s sale price to $25,875. From various Colts to numerous Smith & Wessons, Rock Island Auction Company had nearly 1000 lots of revolvers from dozens of manufacturers.

Collectors and shooters continue to respond strongly to the ever-increasing quality of guns available in the Regional Auctions. The $8.9 million figure achieved this February doubles the results from the same auction six years ago and also approaches the sales totals of the company’s top end Premiere Auctions at that same time. rockislandauction.com

Tennants present the highlights of their recent Militaria and Ethnographia sale…

Highlights of the sale include a good selection of 19th Century pistols, such as a Good Pair of 19th Century Percussion Target/Duelling Pistols by Strowse of Brompton, near Medway, Kent, each with 25cm octagonal brown twist steel barrel, the top flat stamped BROMPTON, with foliate engraved breech and tang, foliate engraved dolphin hammer and signed back action lock plate, walnut half stock with German silver fore-end tip, steel ramrod pipe, trigger guard with pineapple finial, chequered bag butt and inset escutcheon, with wood ramrod, one with brass powder measure, the other unscrewing to reveal a worm screw. Estimate: £3000- 4000 plus buyer’s premium. Sold for £3200.

From the ethnographic section of the sale is a Late 18th/Early 19th Century Fijian Ulu (Throwing Club) (Estimate: £750-850 plus buyer’s premium. Sold for £750), and a Masai Buffalo Hide Shield from, Kenya, of convex oblong form, with unusual scarified and red stained decoration of arching fronds (Estimate: £100-150 plus buyer’s premium. Sold for £900).

Entries are now invited for the next Militaria & Ethnographica Sale on 5 June 2019. tennants.co.uk