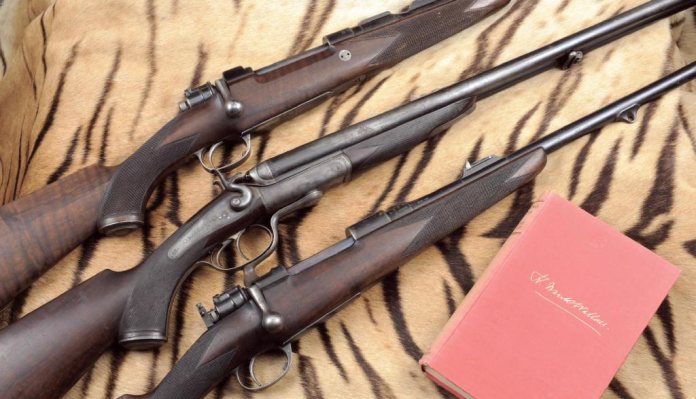 Holt’s Auctioneers recently sold a scarce Webley & Scott .177 underlever target air rifle, model ‘Mark 3 Supertarget’, for a new world record price at auction of £1300 against an estimate of just £200-300. Made around 1963, the preproduction model, which came from a vendor in Lincolnshire, features a blued tapering 18½-inch barrel, dove-tailed tunnel fore-sight with interchangeable elements mounted on a ramp, no provision for rearsight, moulded tap-handle, plain air-chamber (not marked with model name), applied ‘PARKER-HALE’ diopter sight, figured plain walnut pistol-grip half stock (cracked at hand) with screw lid fore-sight element holder to base of grip (elements included), scarce factory fitted sling-swivels, period leather sling and push button under-lever, the whole retaining the majority of its original factory finish (some small marks to wood). Holt’s Auctioneers’ Robert Morgan explained why the air rifle commanded such a high price: “Granted, this Lot is a nice example, but we were surprised it went for so much. I would have been less surprised if it was boxed, but it wasn’t. The price raced up very quickly as two bidders competed for it. It just goes to show what an unexplored market air rifles can be.” Holt’s Auctioneers’ next auction in London is on Thursday 16th March 2017. www.holtsauctioneers.com

The Rock Island Auction Company in Illinois is constantly looking for new ways to sell guns better. The case in point being their February Regional Firearms Auction held February 16th to 19th – an event which will be the most massive in their entire history. In recent years, they sold anywhere between 24,000 – 28,000 firearms in a year. In contrast, the February sale will sell 10,000 firearms in just four days! Headlining this enormous group of firearms is a trio of Henry rifles, as well as a pair of military Jeeps from AMG and Ford. And customers also won’t have to look hard for a wide assortment of Winchesters, German military arms, Colt revolvers, U.S. military arms, and thousands of modern, usable firearms. With an offering this huge, the variety and selection couldn’t be better!

Their success in 2016 set a new benchmark in the auction industry, and their doors are open to the public so that buyers can pick up, inspect, and aim any item in the sale. So te February sale will be a day inside a state-of-theart facility filled with helpful staff, like-minded collectors, and more guns than we’ve ever previously offered. Head to Rock Island’s website to see more about their auctions, both in Illinois and online. E: info@rockislandauction.com www.rockislandauction.com

More action from Holt’s Auctioneers, as the sale of an unusual 12-bore rotaryunderlever double-barrelled hammergun, made in 1899 by top London gunmaker James Purdey & Sons for £11,000, doubled its estimate of £5000- 7000. The hammergun was commissioned by Scottish gun collector Charles Gordon, one of the most prolific collectors the British gun trade has ever encountered.

Chris Beaumont from Holt’s revealed that the pair was made for Alec Greenfield, the then owner: “A perfect example to prove that best quality isn’t exclusive to just the familiar big names in gunmaking. This pair of Greenfield guns, made for the then owner of H.S. Greenfields (of Canterbury) are almost certainly London made and show all the quality and finish you’d expect from a best London gun.” The guns feature 26-inch nitro chopperlump barrels (London proofed for 1980), ribs engraved ‘GREENFIELD & SON. UPPER BRIDGE STREET, CANTERBURY’ and gold-inlaid ‘1’ and ‘2’ at the breech ends, 2½-inch chambers, bored approx. imp. cyl. and ½ choke, Holland & Holland self-opening systems, toplevers gold-inlaid ‘1’ and ‘2’, automatic safeties with gold-inlaid ‘SAFE’ details, gold-inlaid cocking-indicators, rolled-edge triggerguards, best bold scrolling acanthus engraving on a matted background, the lockplates with beaded bordering, the undersides with shell motifs and with ovals engraved ‘GREENFIELD & SON. CANTERBURY. KENT’, retaining virtually full original colourhardening and finish, 15¼-inch figured stocks with diamond grips, weight 6lb. 4oz., in a lightweight leather motor case with canvas and leather outer. The estimate is £12,000-16,000. www.holtsauctioneers.com

Sporting Gun specialist, Gavin Gardiner, will be visiting Sotheby’s at New Bond Street, London, on February 27th to give advice and free auction valuations on all types of Sporting guns and rifles, both modern and vintage, as well as shooting accessories, guncases and related items.

Gavin, who has over 25-years’ worth of experience of the auction world, said: “We are looking for all things shooting, but especially guns and items relating to the best and most famous makers such as Holland & Holland, James Purdey & Sons, Boss & Co and John Dickson. The market remains very strong for fine and unusual items, with record prices continuing to be paid, which was evident at my recent auction.”