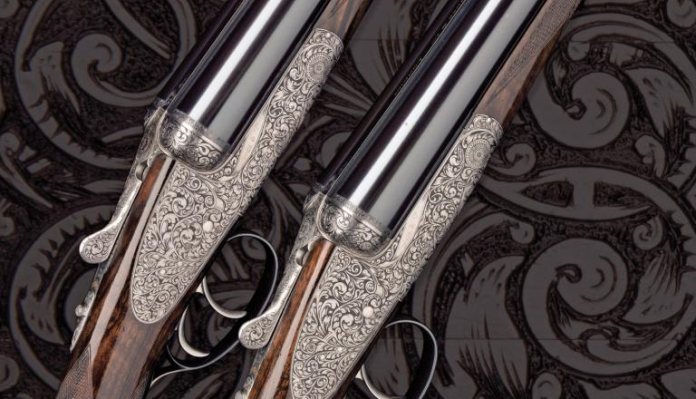 Holt’s Auctioneers’ first offering of 2017 saw a very encouraging start to the year, the 800 Lot auction totalling a hammer price of over £1.2 million with 84% sold on the day.

An increased engagement with social media networks certainly added to the buildup and lively viewing days translated into a bustling auction room on the day and successful bidders were evenly spread between the room, the telephones and the ever increasing internet presence (internet participation breaking new ground in being responsible for over £800,000 worth of bidding activity).

The lion’s share of buyers once more remained within the UK, accounting for just under 60% of purchased lots, with Continental Europe still being responsible for the next largest level of participation – but there was a marked upswing in interest from the United States. It seems the strength and interest in the market still manages to remain steadfast, undeterred by current political and financial uncertainties.

The Harold Bull collection of antique firearms held up the tradition that Private Collections drum up elevated levels of interest to pockets of all capacities, with a diverse and eclectic range of items selling at all levels from a couple of hundred pounds to several thousand. A reflection of the success of the collection was a sold percentage of 91% - which will undoubtedly rise following aftersales. With more of the Bull collection still to be offered up for auction in June and with a large number of items in a similar vein already consigned, there will be a rare opportunity to repeat the experience.

For those who missed the auction, the next auction will be held on 22nd June 2017. www.holtsauctioneers.com

Following on from the success of Holt’s Auctioneers’ live auction on Friday 17th March, the associated Sealed Bid auction which closed on Thursday 30th March demonstrated an equally strong demand. The sold total was just shy of £275,000, with a 72% sold rate and nearly one third of the items selling above top estimate. This makes it the highest sold total to date for a Sealed Bid auction since they were first introduced into Holt’s auction schedule back in 2006.

Like the live auction, whilst the lion’s share of buyers were UK based, there was healthy activity from both European and transatlantic clients, taking account for over one third of the Lots sold.

Always an eclectic mix of ‘the good, the bad and the ugly’ the Sealed Bid auctions offers a wide spectrum of guns, rifles and ephemera at all levels. It’s possible to pick up a good usable gun or rifle for a very reasonable price – but with an ever increasing and generally knowledgeable client base looking in – in this instance 1030 active participants – little is overlooked. A rare .303 MK1 cavalry carbine for example, expected to achieve between £600-700 sold on the day for a very respectable £1,503. Likewise, a 20-bore ‘A1’ grade FN over and under shotgun made £1505 against an estimated £500-700.

The over and under section had the highest individual sold percentage at 91% (and contributing the highest figure to the auction result), always proves to be popular. It’s an ideal source for inexpensive ‘starter’ guns and also, where some of the older models are concerned, a great source for spares otherwise hard to obtain. They were closely followed by small bore guns (for similar reasons) at 84% sold and with air weapons coming in at a close third with 76% sold. The next Sealed Bid auction will close on the 6th July 2017, two weeks after the live auction on the 22nd June 2017. www.holtsauctioneers.com