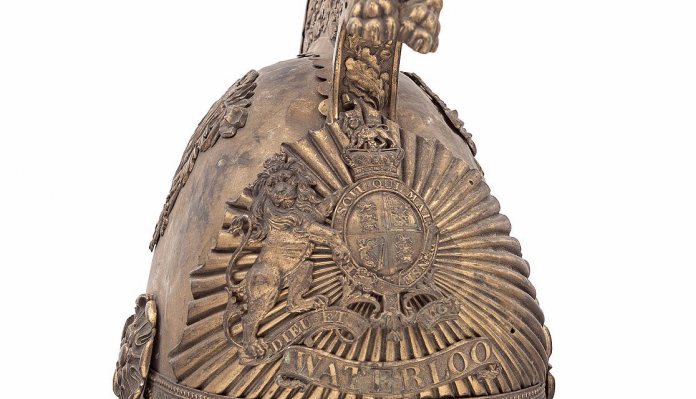 Roy Butler from wallis & wallis brings us his report on the arms & militaria auction, 5th July 2016…

Despite the summer weather being a washout so far, the auction was a great success with prices exceeding expectations yet again. Internet bidders dominated events for another sale and bought a large percentage of lots.

Next we have this scarce Third Reich SS officer’s ‘Totenkopf’ presentation ring, silver coloured metal, the inside engraved ‘S.lb. Kiermaier 20.4;38’ and facsimile ‘H. Himmler’ signature. It was worn from much use. Beware the many reproductions on the market and remember that provenance is key to it being genuine. This one sold for £1650.

Taken in the Glorieux. 12 April 1782’. In its leatherette scabbard with silver locket and chape panelled en suite with hilt; with full details of the ‘Glorieux’ which was captured by the British at the battle of Saintes, during the war with America, April 1782, renamed ‘HMS Glorious’, and was then lost in a hurricane off Newfoundland 16th/17th Sept the same year. It sold for £1600.

There was a good collection of naval dirks in the sale and here we show a selection Most of them sold to internet bidders against competition in the room.

A Georgian naval dirk, with shallow diamond section blade 6½-inches long, faintly etched overall with trophies and scrolls, turned swollen ivory short grip with copper gilt lower band, in its brass scabbard, the front engraved with stylised trophy and foliage in frosted panels. The hilt retained much original gilt and it sold for £570.

Moving away from naval items we have this 1796 pattern heavy cavalry officer’s sword, the almost straight single edged blade 35-inches long, with hatchet point, etched with crowned GR cypher, Britannia and trophy on one side and pre 1801 Royal Arms, with supporters and motto, and trophy on the other, all with florets and flourishes, regulation steel ‘ladder’ pattern basket hilt with plain forward sloping pommel and facetted backstrap, wirebound leather grip, in its steel scabbard. It was in good condition for its age with a good dark patina to the hilt. It sold to a commission bidder for £1800.

Finally, for edged weapons, we have this scarce WWII smatchet. Designed for special forces by Captain William Fairbairn, it is much scarcer than the FS fighting knife. It had a single edge leaf shaped blade 11-inches long, with plain oval crossguard, wooden grips secured by two large rivets, correct alloy pommel with lanyard hole. As is common with these knives there were no visible markings. It would have originally come with a leather covered sheath, which was sadly not present and is said to have been based on the larger WWI Royal Welsh Fusiliers trench knife. It sold for £500.

Now we move on to other militaria with this rare 17th century ‘Spider’ helmet, the crown formed from ten radiating bars secured by two bands and with a peak at the front, the folding ‘legs’ hinged at the base of the radiating bars, the lower band and peak pierced for attachment of the lining. There was patinated rust overall and it sold for £1300. Note: A similar Spider helmet (with parts missing) was sold in the Hann Collection in Pennsylvania in 1980.

An officer’s 1834-1843 pattern helmet of the 6th (Inniskilling) Dragoons, the headband with title, rayed helmet plate (unicorn supporter and most of ‘Mon Droit’ scroll missing), foliage to skull, ear rosettes and top three chinscales, tall oak wreath crest with crouching lion finial. Basically in good condition for its age, retaining a little original gilt and well worthy of careful restoration (shallow dent to top of skull). It went to an Internet bidder for £1850.

An Italian officer’s 20-bore flintlock pistol, 9¾-inches overall, two-stage barrel with chiselled band and octagonal breech stamped with lion poinçon and three rosettes; the half rounded lock having ring neck cock and sloping brass pan, the plate engraved ‘Mre Rle di Napoli’, the walnut fullstock with chequered panels to the butt and pale brass mounts including engraved trigger guard and flat butt cap engraved with trophy of arms. Originally longer, the fore end had been split and repaired. It sold for £400.

Finally, in this report was a 50-bore cannon barrelled flintlock boxlock pocket pistol, the turn-off 2¾-inch barrel with Tower private proofs, the frame engraved with panels of scrolls and flower heads and signed in script ‘Allen, Poole’, the rounded butt inlaid with silver wire scrolls, and with oval silver escutcheon and silver butt cap with grotesque mask, hallmarked for Birmingham 1781. Basically in good condition the action required attention and there was some wire inlay missing. It still sold for £400.