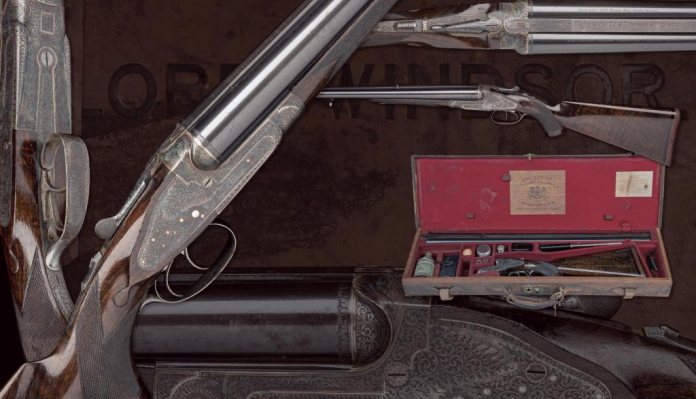 Holts Auctioneers’ summer auction demonstrated a gratifying consistency to the market with the 768 Lots returning a total hammer price of £1,025,935 and 75% of the Lots sold on the day. The viewing days were well attended, though the sweltering conditions in central London seemed to encourage a higher proportion of telephone and commission bids than normal and true to current form, internet participation was increased yet again, with a total of 2914 registered live online bidders.

Confidence in online bidding is certainly growing both in terms of the numbers of participants and also the average value of successful bids via the Invaluable platform, with the average online purchase/winning value equating to £1050 and almost 13% of auction Lots sold online. The initial reticence to spend money over the internet is being replaced with growing confidence, as proved with some larger figures of £3000 and £7600 being spent over the internet.

Mirroring the March auction, the lion’s share of buyers once more remained within the UK, accounting for just under 60% of purchased Lots, with Continental Europe still being responsible for the next largest level of participation but with the United States accounting for the second highest individual total in terms of outlay and number of Lots purchased.

The highlight of the auction was undoubtedly the small collection of rifles owned by the Windsor-Clive family, Lots 1150 - 1155. The quality of the rifles, combined with their extraordinary condition really caught the imagination of the crowd and each one exceeded its estimate by some proportion – the most dramatic being Lot 1155, a fine Rigby .450 nitro express sidelock non-ejector double rifle, soaring past a conservative £10,000- £15,000 estimate to achieve a staggering £56,000 (making it the top Lot of the auction).

The other ‘top slots’ were filled by an even mix of best English and Italian guns and rifles, with Piotti, Holland & Holland, Boss and Fabbri taking the honours.

The market for antique firearms proved as strong as ever, with the second part of the Harold Bull Collection repeating the success of the first. Arguably the most impressive Lot (575) offered in the Antique section was the pair of outsized John Dickson percussion horse pistols ordered by the eccentric collector Charles Gordon – and they fetched an equally impressive £20,000 hammer price against a robust estimate of £20,000-25,000. For those who missed the auction, there is the opportunity to purchase Lots remaining unsold via the website, where the Sealed Bid sale is also available to view and bid on until its closing at 10:30am on Thursday 6th July 2017. The next auction will be held in London on Thursday 21st September 2017. www.holtsauctioneers.com

Holts Auctioneers’ Chris Beaumont commented: “Fully crossover stocked guns are an increasing rarity these days – once the common solution to a ‘master eye’ anomaly, it no longer seems to be the popular choice. Each example being uniquely swept and cast for its original owner and with the locks, action and furniture swept, returning them to a more standard configuration isn’t really commercially viable. Finding two (or more) buyers for such precise specifications can be a little ‘hit and miss’ (excuse the pun) – but if you do, they know their chances of finding another perfect fit (especially on guns fairly rare in their own right) is going to a tough challenge – so they will push the boundaries at auction.

Holts Auctioneers recently sold a fine Flli Piotti Castelli engraved 28-bore ‘Boss type’ over and under handdetachable sidelock ejector for a remarkable £30,000, against an estimate of £15,000-£20,000.

Holts Auctioneers’ Chris Beaumont commented: “This remarkable little gun extolled the very best virtues of Italian and English design. Piotti’s modern take on the veritable Boss over and under, it is one of the most attractive and also effective guns available today. Being a perfectly scaled down 28-bore makes it even more desirable – evidently – as the market responded by taking the hammer price to £30,000.”