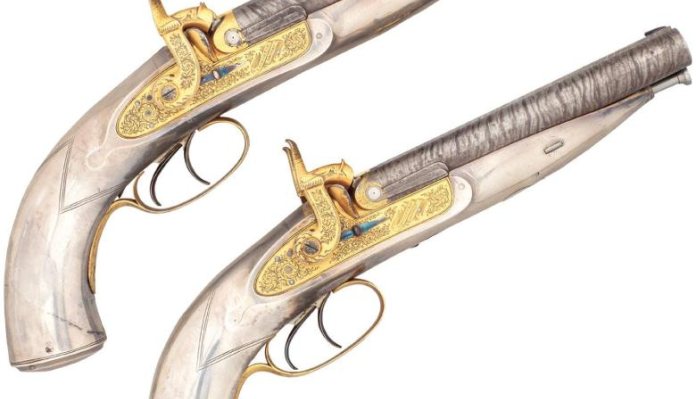 An important private collection largely formed in the third quarter of the 20th Century was the highlight of Thomas Del Mar Ltd’s July sale of Antique Arms, Armour & Militaria at Olympia Auctions. Viewing took place on the preceding Sunday, Monday and Tuesday and online bidding was available via the-saleroom.com, invaluable.com, and the new online bidding platform, Olympia Live at olympiaauctions.com. The collection comprised more than 150 lots.

Thomas Del Mar has a strong reputation for offering prestigious collections in his sales. As he comments: “As the outline above shows, the 10th July auction offered a broad range of lots with a number of notable pieces in excellent condition. The sale had particular strength in English firearms and Asian arms and armour.”

The sale saw several items with connections to India, including is a fine Royal cased pair of 20-bore Howdah pistols, made for Takhat Singh, Maharaja of Jodhpur (1843-73) and presented to his son, Kanwar Shri Jaswant Singh II, by London –maker Charles Lancaster. The inscription on the barrels records their ownership by his son, and successor as Maharaja, Kanwar Shri Jaswant Singh II (1838-95).

From Turkey, a fine 12- bore musket featured, dating from circa 1821 and profusely inlaid with engraved plaques of silver, brass and two colours of gold, a fine pair of 32-bore silver mounted Caucasian pistols from the 3rd quarter of the 19th century chased with panels of flowers, and a fine early 19th century pair of Greek 20-bore flintlock holster pistols decorated with foliage in relief including an exotic bird feeding on a flower’s nectar.

From Asia a 17th/ 18th century Japanese iron helmet with a flower-shaped finial was on offer, and a fine and rare decorated Tibetan saddle, of a similar date, formed of a wooden tree joined by later leather thongs, and decorated with openwork designs of scrolling foliage and billowing clouds inhabited by dragons. Also, equine-related was an early 16th Century Ottoman shaffron (head defence).

There was also an intriguing collection of miniature items, such as a group of eight miniature firearms dating from the 20th Century, while a cased finely constructed miniature wheel-lock pistol in the late 16th Century style also went under the hammer.

A rare Siamese (Thai) gold-mounted sword (dhab) in the Japanese taste, for presentation to a western dignitary, third quarter of the 19th Century.

A fine cased pair of royal 20-bore d.b. percussion rifled Howdah pistols, made for Takhat Singh, Maharaja of Jodhpur (1843-73) and inscribed to his son, Kanwar Shri Jaswant Singh II, by Charles Lancaster, 151 New Bond Street, London. The Lancaster records state that these pistols were made in 1862 for the Maharaja of Jodhpur. During this and the preceding year the Maharaja bought no fewer than 14 firearms from Lancaster.

Following the sale, Auctioneer and Specialistin- charge, Thomas Del Mar, commented: “The pre-sale exhibition was attended by a record number of people and we had a very positive response to the catalogue. The strength of the Asian market was evident throughout. As ever the greatest successes were for the more-rare objects in good condition and provenance had a notable impact in a number of instances. There was significant internet interest and a noticeable increase in online bidding activity.”

The next sale will take place on December 5th. thomasdelmar.com

Lance Dillie from RIAC reports back on their latest lots…

Rock Island Auction Company’s 2019 June Regional Auction was nothing short of an exciting and wellattended four-day event. With over 5000 lots up for grabs, the in-person, phone, and online bidders were fast acting when a lot they wanted came across the podium. The pace of bidding this weekend was speedy, averaging around 140 lots an hour!

Our website traffic for the auction was bustling and over 22,000 sealed bids were placed before the auction ended. Thousands of people from all around the world participated in the auction via telephone, RIAC Live, and of course the large number of sealed bids. It all resulted in a sale that achieved $8.5 million in four gun-filled days.

One main highlights of the sale was the array of gorgeous Henry rifles. The top selling of the bunch was a U.S. contract Henry Lever Action rifle that had documented use in the 97th Indiana Infantry regiment during the Civil War.

Given the manufactured date of somewhere between 1862 and 1863, the rifle most likely saw use in the siege of Vicksburg, the Battle of Chattanooga, and possible in Sherman’s March to the Sea. The historic piece reached a price realised of $25,875.

The varied Colt revolver selection in this auction was another high point of the sale. One of the most outstanding was a Colt special order first generation SAA revolver with detailed factory engraving. Accompanied by its factory letter, the stunning blue barrel and original ivory grips made this Colt revolver stand out from the crowd. The beauty exceeded its estimate with a realized price of $20,700. From the great bidding battles to the wide selection of items available, this auction was the perfect way to kick off the summer. Collectors and gun enthusiasts alike came together to make the four-day sale a huge success, adding to what is already an incredibly successful 2019. rockislandauction.com