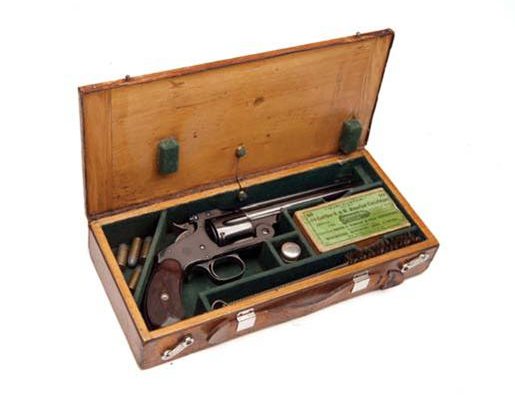 The antiques section of Holts March sale on the 22nd was another resounding success. Not only did the new venue at Blackheath help by allowing the items to be better laid out and displayed, but the sheer diversity of the pieces on offer was exceptional meaning that there was something for everyone.

After a short section of rare and collectable books and works of art, the guns proper started with the air weapons. Outstanding in this category was undoubtedly Lot 100, the Whiscombe JW50. Despite comparatively recent manufacture, exceptional condition, build quality and rarity helped it smash its estimate of £1000-1500 by over double to achieve the dizzy heights of £3300. An interesting collection of late 1970s BSA air rifles that had been squirrelled away by a far-sighted collector and that had remained unused in their cartons since purchase also performed extremely well, all equalling or exceeding their top estimates proving yet again an investor does not need to be particularly ‘well heeled’ to make a good return. Another good example of this was the ‘Harmless’ boys’ toy dart rifle (lot 105); an item sold for a few pence before World War One returning £250 on the hammer! As always, condition is the key, with the mundane in good condition always outperforming the exotic in poor.

With notable exceptions, edged weapons have been a little static of late. However, one area where we have seen exceptional growth is in hand-made collector’s knives. For the first time, it would appear that the top Nordic producers are outstripping the better-known makers from the U.S., and an exquisite folding knife ‘Nordic Blizzard’ (lot 255) produced as a collaboration between four of Sweden’s best: Jonny Walker Nilsson, Anders Hedlund, Johan Gustavssen and Mattias Styrefors achieved an astonishing £5500 on the hammer.

In the flintlock section, buyers eagerly awaited Lot 405, a rare sporting version of Henry Nock’s volley gun. Many wanted it, and there was museum interest as well, but it eventually was hammered down after a considerable fight in the room for £20,000, well exceeding its estimate. A rare ball-butted silver-mounted Ripol pistol (lot 450) also attracted considerable interest to sell for £1400.

Percussion guns continued to perform well with a number of Whitworth rifles being the main attractions. Top of the pile was a fine and rare rook and rabbit rifle by the same company, in appearance it was like a miniature match rifle, complete with all its scaled down sights and in its original storage case (lot 540). It deservedly made £3500 against a low estimate of £2000. An apparently unfired pair of percussion Durs Egg Officer’s Pistols (lot 580) recently discovered in a cupboard on one of our many valuation visits also brought a good price of £7400.

Obsolete calibre weapons have had a bit of bad press of late, and this has reflected in prices attained. However, this sale again bucked the trend with a rare Venditti pistol, the fore-runner of all lever action designs, bringing £4100 (lot 666) and an exceptional cased Smith & Wesson New Model No.3 (lot 660) smashing its estimate of £3000-5000 to romp home at £5900.

Vintage accessories are also another huge growth area for the collector and investor with a rare ‘Parker-Hiscock’ mechanical magazine for an Enfield training rifle selling for £900 (lot 704) and a group of rifle guncase accessories (lot 707) bringing £450 against an estimate of £200-300, emphasizing that perhaps we all should look carefully though our own ‘bits-box’ for hidden gems! www.holtsauctioneers.com

The next auction will take place on 21st June at 10am…

This is the second time that Holts will hold an International auction at their new location of Holly Hedge House, Blackheath, London, SE8 0QZ. The March auction was very successful with record numbers of people attending who were able to take advantage of the free parking, on site catering as well as enjoying the drinks evening.

The catalogue is now online at www. holtsauctioneers.com and already features some outstanding items for the sportsman as well as the collector.

Lot 455 - A rare 38-bore wheelock pistol of Brescian form circa 1660 in fine condition and finished with decorative metal work to grace any collection of classic arms.

Lot 505 - A fine cased .451 (Whitworth) percussion three band rifle by Manchester Ordinance & Rifle Co. It is on offer with its original full-length banana shaped oak storage case, a rarity in itself.

Lot 1600 - For the discerning sportsman, a rare opportunity to own an example of Contemporary British gunmaking at its very best. A fine and unique Charles Lee engraved 12-bore single trigger over and under Purdey style sidelock ejector by Scottish gunmaker David Mackay Brown. The gun is referenced in Donald Dallas’ definitive history of the maker ‘David McKay Brown - Scotland’s Gun and Rifle Manufacturer’ as being one of just nine sidelock guns ever built by him and the only example in an over and under configuration.

There is also militaria, percussion and flintlock arms, edged weapons, sporting themed works of art and sculpture, a full range of modern and vintage accessories alongside classic, vintage and modern sporting guns in the Holts auction. www.holtsauctioneers.com

There are four ways to bid: