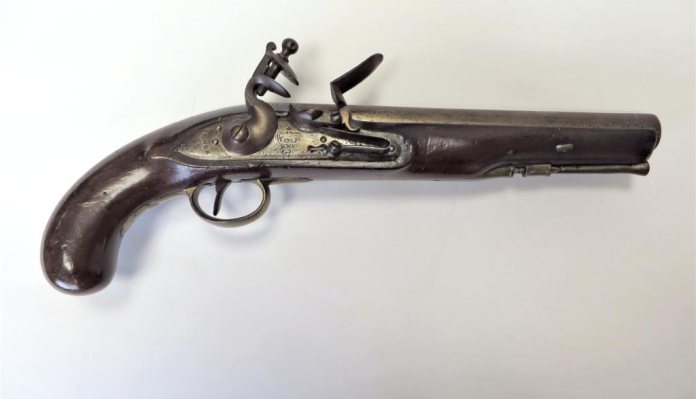 The next Marlow’s sale will be held on Thursday 4th May 2017 at Ravon Court, Stafford. Please note that all sales will now commence at 10.00am and live internet bidding is now available. Viewing will commence at 8am, but if you wish to view in the days preceding the sale then please do not hesitate to contact us to book an appointment. Cataloguing is now in progress for this sale and the new full colour catalogue containing over 650 lots will be available in late April. There will be the usual variety of categories including badges, medals, curios, equipment, uniforms and weapons.

Elvis Presley’s Revolvers up for auction, along with his gem-studded sheriff ’s badge and the signed sale documents for Graceland…

Two of Elvis Presley’s lavish revolvers will be available in a May firearms auction hosted by Rock Island Auction Company. They are accompanied by several items personally owned by the legendary performer, such as a diamond and ruby studded Shelby County sheriff’s badge, the Elvis-signed contract to purchase Graceland, and numerous personal files also signed by Presley.

The King himself purchased the revolvers in 1970 from a Beverly Hills sporting goods store before sending them to Germany to be elaborately decorated. One was presented to Vice President Spiro Agnew as a gift but was returned a short time later while Agnew was being investigated for corruption.

“We are thrilled to offer the memorabilia of an American rock and roll icon,” said RIAC President Kevin Hogan. “These revolvers are beautiful enough on their own to bring a great price, but when you add the iron-clad Elvis provenance things really get exciting. Authentic Elvis items can bring tremendous buzz and high totals at auction, so we’re anticipating a lot of action when these cross the block.” The pre-auction estimate for one revolver seen being held by Elvis in a period photograph is $160,000 to $275,000.

Rock Island Auction Company is no stranger to extraordinary firearms owned by historical figures, having sold a rifle owned by President John F. Kennedy for $149,500 and a Winchester rifle presented by Buffalo Bill Cody for $345,000.

The sale will also feature investment-grade antique collectible firearms, luxurious sporting guns, and nearly 100 machine guns. It will take place May 5th – 7th at the Rock Island Auction facility and will be open to the public. www.rockislandauction.com

Holt’s Auctioneers’ first offering of 2017 saw a very encouraging start to the year, the 800 Lot auction totalling a hammer price of over £1.2 million with 84% sold on the day.

The Harold Bull collection of antique firearms held up the tradition that Private Collections drum up elevated levels of interest to pockets of all capacities, with a diverse and eclectic range of items selling at all levels from a couple of hundred pounds to several thousand. A reflection of the success of the collection was a sold percentage of 91% — which will undoubtedly rise following aftersales. With more of the Bull collection still to be offered up for auction in June and with a large number of items in a similar vein already consigned, there will be a rare opportunity to repeat the experience.

The next auction will be held on 22nd June 2017. www.holtsauctioneers.com