The Auction Report: Rock Island May 2019 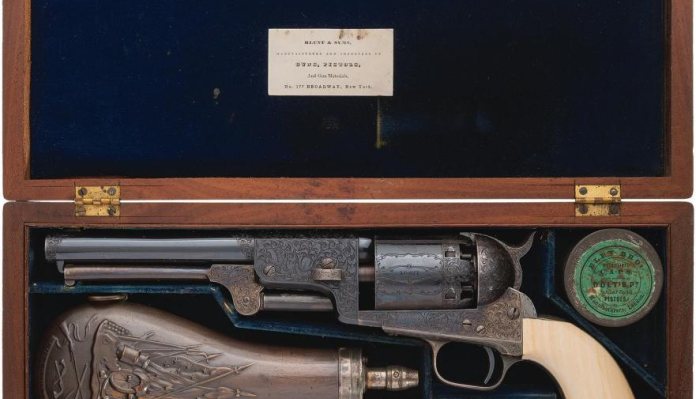 We have been hinting since late last year that 2019 promised to be a special year at Rock Island Auction Company, and a quick glance at the special items in our May 2019 Premiere Firearms Auction confirms it in spectacular fashion. The collectible and antique, the high condition and historic will all be available en masse in the May 3rd – 5th sale. Such assemblages of fine arms are made possible by hundreds of individual collectors from across the county and, of course, by an exciting number of significant collections from well-studied, lifelong firearm enthusiasts. Leading the pack will be continued offerings from the prolific collections of Robert M. Lee, Larry Jones, Allan Cors, and Robert E. Petersen, but also featured are fantastic collections from Dr. Richard Kobetz, Robert Ferro, Dick Salzer, G. Thomas Puett, The NRA Whittington Center, the Putnam Green/Sycamore Collection, and an anonymous collection presented as The Southwest Collection.

One of the sources of massive interest in our record-breaking 2018 was the fleet of military vehicles. Tanks, jeeps, motorcycles, troop transports, and more were large attractions in every sense of the word. This year we are pleased to announce a second offering of these powerful and impressive military vehicles. Taking point in the auction will be an M48 Patton battle tank, a Swiss Pz61 battle tank, and a Soviet MiG-21 Fishbed fighter jet. These are sure to steal the show, and rightly so since such vehicles are seldom offered publicly. However, savvy collectors will not lose focus of the bevy of remarkable firearms that comprise the overwhelming majority of the auction.

There are over 400 firearms from this beloved American gunmaker in our May Auction and the highlights are spectacular Leading the way is a stunning, factory engraved Winchester deluxe Model 1886, crowned with bright platinum bands. Numerous special order lever actions in superb condition populate the sale, but other eras are represented as well. Collectors are sure to marvel at the magnificent, exhibition grade Deluxe Model 1907 semi-automatic rifle, signed and engraved by Master Engraver Angelo Stokes. Also of note will be several U.S. military pieces such as an outstanding, all original, near new, U.S. Army contract Winchester Model 12 trench shotgun with its Winchester M1917 bayonet and scabbard.

Over 650 Colt firearms will permeate the sale and with numbers like that, it should come as no surprise that all areas of Colt collecting will be well represented. Serving as flagship for the entire auction, is an elegant revolver that threatens to break the world record price for a single firearm ever sold at auction. Known as “The Millikin Dragoon,” this cased, Gustave Young engraved Third Model Dragoon has achieved celebrity status in the gun collecting community. It is a revolver with an unprecedented combination of historical pedigree and condition that exists only at the very pinnacle of collecting. It is without question, the finest presentation grade Colt Dragoon we have ever catalogued, and it is our honour to present it to the collecting public this May. Also available in this tremendous offering is the finest known, factory cased Colt Pocket Model Paterson No. 1, as well as a factory engraved, nickel plated and acid etched black powder Frontier Six Shooter, each also destined for top collections.

With all the attention that the military vehicles attract, smart collectors want their items in the same sale. This has resulted in a myriad of phenomenal pieces that have come out of the woodwork. Early American military arms have an excellent selection featuring some of collecting’s most desirable arms: a U.S. Model 1799 North & Cheney, the finest known Dance & Brothers Confederate revolver, a McCormick “Model 1797/Horseman” type flintlock, a very rare North Army Contract Model 1811 flintlock, as well as several stunning high art presentation swords from the era’s finest artisans. Modern selections include the aforementioned military vehicles as well as remarkable rarities such as a Sedgley glove gun, a U.S. Air Force Colt Aircrewman revolver, a Singer M1911A1, and several experimental bayonets.

It’s difficult to know where to begin when discussing the sporting arms in this sale. Shall we first address the high art, wondrously embellished arms from beloved manufacturers such as Savage and Marlin? Or should we instead discuss the wide variety of high-end manufacturers, well-known for producing fine, luxury firearms such as Westley Richards, Holland & Holland, Rigby, Parker Brothers, and others? Both provide exceptional art and aesthetic, a phenomenal opportunity for investment, colossal pride of ownership, and superb craftsmanship. Indeed, they are two sides of the same coin.

To touch on every genre, let alone every gun, would require an entire book. Fortunately, we produce threee-volume catalogue sets. There we can go in-depth on the 40+ Class III arms in this sale, the incredible foreign military pieces, the over 1000 extraordinary antiques, the oddities, the curios, the fascinating, and the historic.

For more updates on this remarkable sale, please subscribe to our customer list and follow us on social media. We promise to awe you with amazing firearms. rockislandauction.com