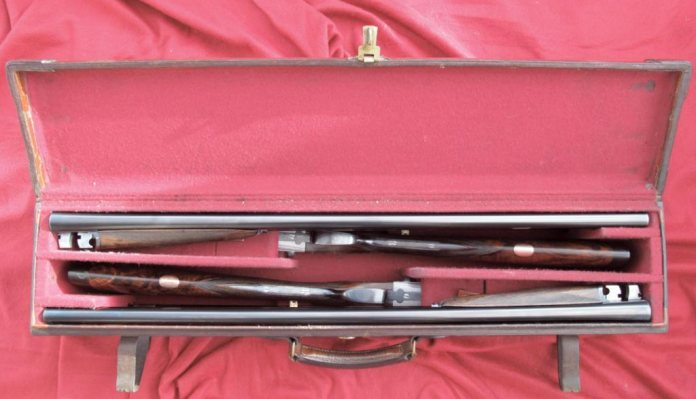 Two rare sporting guns made by an English rifle-maker employed by Queen Victoria’s son have been consigned to auction.

William Richard Leeson, who was born in Bletchingley, Surrey, in 1851, was a renowned English gun-maker beloved by the gentry and royalty. He soared to ever greater prominence in 1890 when he was appointed rifle maker to the Duke of Edinburgh. This allowed him to proudly advertise himself as ‘Rifle Maker by Appointment to HRH The Duke of Edinburgh and Saxe-Coburg-Gotha’. The Duke, named Alfred, was the second son of Queen Victoria and Prince Albert of Saxe-Coburg and Gotha.

William, who marked his guns ‘W.R Leeson’, started trading in a shop in Kent but by 1907 he had moved to London and had prestigious business addresses in Bond Street, Regent Street and Hanover Square.

Now, a matching pair of exceptionally fine 16-bore ejector shotguns made by William Richard Leeson around 1920 have been unearthed by Hansons Auctioneers in Derbyshire and consigned to auction. Charles Hanson, owner of Hansons Auctioneers, said: “These guns have royal pedigree and will spark worldwide interest. W R Leeson was renowned for quality. He cemented his success in 1890 when the firm was appointed rifle maker to the Duke of Edinburgh.

“The estimate on the shotguns is £8000 to £12,000. We hope, with sporting interest across Derbyshire, Leicestershire, Staffordshire Warwickshire and neighbouring rural counties, these shotguns will find a new home and be looked after for the next generation.

Are you in the market for a new double rifle case or is this something you like to collect? Well in Holts Auctioneers’ forthcoming auction on September 21st, bidders have the chance to purchase a beautifully finished oak percussion double rifle case, by the Liverpool gunmakers Williams & Powell (Lot 45). Within one of the case compartments there is a railway label from Daniel Fraser gunmakers in Edinburgh, inscribed ‘Miss A Watt, Speke Hall, Garsdon Dock Station per Liverpool’, Miss Adelaide Watt being the last owner of Speke Hall and Speke Estate in Merseyside, also Spott Estate near Dunbar in Scotland.

After Adelaide’s death in 1921 Speke Hall was left in the hands of trustees for 21-years, before it was passed to the National Trust in 1942. Speke has a long history, the boundaries of the estate being set in 1334 (though reference to Speke is made in both the Doomsday surveys of 1066 and 1086, the latter survey reporting it to be held by the Saxon Thane, Uctred).

The double case is estimated to sell for £600-800. www.holtsauctioneers.com

In Holts Auctioneers’ September 21st auction, bidders have a chance to purchase two beautifully presented and individually cased, 8-bore hammerless sidelock non-ejectors by London gunmaker Joseph Lang & Sons (Lot 920). These guns were originally sold by the maker on 31st August 1911 at a cost £78. 15s a piece.