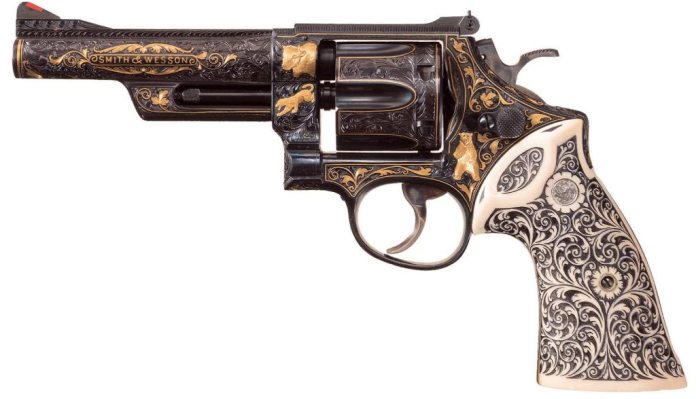 It didn’t matter the genre, select one of your choice and historical items of all manner could’ve been seen and found making an impact come auction time. Thanks, in part, to the fantastic nine collections featured in the sale, collectors of every discipline had their pick of high-condition firearms and those with a historical significance. The lush pickings led directly to another wildly successful weekend and a realised total of $14.5 million for the auction house on the Mississippi.

Over 450 Winchesters graced the sale, so finding history there was no problem – even the early Volcanics were complemented by a fascinating assortment of cased daguerreotype images. Leading the way in Lot 1016 was a silver plated, first year production Henry rifle with the supremely low serial number of 17. That number is so low, in fact, that they were still presenting Henry rifles to men of great importance such as President Abraham Lincoln and Secretary of War Edwin Stanton. The significance was as easy to see as the glints off the silver finish and the “damned Yankee rifle” saw a realised price of $276,000. The rarity and high-condition was plentiful even in the accessories. Collectors were quick to capitalise on the opportunity and the early Winchester bullet board in Lot 19 was snatched up for $37,375.

The Colts in the sale were even more abundant than the Winchesters. They numbered more than 600 and were led by items from the Robert M Lee Collection. One of these Colts had the honour of carrying the highest sale price of the entire auction. In Lot 3169 was an absolute icon in the pantheon of fine 19th Century American arms. Previously part of the William M. Locke and Warren Anderson Collections, the well documented Colt 1860 Army is arguably the finest of its kind in existence and easily the best accompanied by its matching shoulder stock. Featured in numerous books and publications, the competition was fierce for the well-known and highly sought cased revolver. Bidding quickly shot over the $280,000 high estimate and a bidding battle of juggernauts erupted. The heavy hitters went back and forth until finally the stunning cased set became the cornerstone in a new collection for $506,000. Other Colt revolvers of note were lot 1230’s deluxe engraved, blackpowder, nickel finished Colt Single Action Army that brought $86,250, and a spectacular gold Damascene Colt Third Model Hartford London Dragoon revolver that satisfied someone’s gold fever for $74,750.

Easily the most exciting portions of the auction were those that offered the Class III firearms. The phone bank was buzzing with live bidders across the country and even the live internet bidders couldn’t pass up on the action. Bids were flying in from all corners of the room and watching the auctioneers match the energy in the room made for an unforgettable atmosphere. With this kind of activity RIAC should definitely be the first place on anyone’s mind seeking to consign a machine gun or other NFA item. The top item in this category was an early production Colt Model 1921 Thompson submachine gun originally shipped to a police captain in Detroit, MI. The winning bid would come from a live internet bidder who won his very own “Chicago Typewriter” for $63,250. Also of note, a Johnson M1941 LMG brought an attractive $63,250. Another highlight of the NFA items offered.

Other strong showings were made by the Smith & Wesson revolvers of the Chad Gripp Collection and 1911 pistols. Leading the way for the beloved wheel guns was the Registered Magnum owned by Hollywood star Gary Cooper that brought $57,500, and a fantastic master engraved and gold inlaid .357 Magnum depicted numerous North American big game animals that bagged and tagged its $27,500 high estimate en route to a $51,750 realised price.

Earning similar enthusiastic bidding, 1911 pistols seem to be growing more popular with every auction, driving their prices to new levels. Indicative of this fact was the Singer M1911A1 with its mysterious sweetheart grips that found $69,000, or the first year production, three-digit serial number Colt 1911 Navy Contract pistol that sailed off for $17,250.

When combined with the Thursday Preview Day, and its well-attended annual barbecue, the auction was a much anticipated event that exceeded expectations. The historic items that permeated the event drove a great deal of interest, and when combined with other superior condition items from lifelong collections, the summer definitely ended on a splendid and successful note. www.rockislandauction.com

Holts Auctioneers’ September auction once again showed encouraging consistency in the market, with a percentage of 77% of the 720 Lots offered sold on the day and with a hammer price totalling just shy of £1.2m.

The viewing days were busy and the auction day itself brought with it a buzz of excitement and good humour that undoubtedly enhanced the bidding activity in the room, in turn pushing those participating remotely by telephone or the internet just that little further. True to form, participation via Invaluable’s live online bidding platform increased, both in the number of active bidders and also by value of Lots purchased.

In line with the two previous auctions of the year, the UK supplied the majority of the successful buyers, at just under 60% and accounting for nearly half of the total value sold. Continental Europe and the rest of the world evenly split the remaining 40% of Lots sold, the United States once again accounting for the second highest individual total in number of Lots purchased but this time Switzerland taking the honours for second highest total outlay, approximately 20% of the total hammer price.

Competition for the ‘top slot’ of the auction was a keen contest between the best of British and Italian’s finest, the highest price realised by Lot 1311 – a pair of Torcoliengraved Fabbri over and under guns fetching £52,000 against an estimate of £35,000-45,000, with the highest price for a single gun falling to Lot 1645 – a Preater-engraved Holland & Holland over and under fetching £45,000. The third highest price realised is worthy of a mention, two magnificent Joseph Lang 8-bore rotary underlever hammer ejectors, built in 1911 and remaining in remarkably original condition. Estimated at a £40,000- 50,000 the hammer eventually fell at the halfway mark, a very creditable £45,000.

The market for antique weapons proved as strong as ever, the highlight of the morning sale being a very fine pair of Purdey 32-bore percussion rifled officer’s pistols, Lot 550, splitting their estimate of £8000-12,000 with a solid £10,000 hammer price. Interest in accessories and associated items too showed considerable strength, highlights including a fine Williams & Powell oak percussion guncase with interesting provenance outstripping its estimate of £600-800 by some margin, realising a hammer price of £2300 and a small section of four exceptional Swedish custom knives all exceeding top estimates to reach a cumulative hammer price of £13,500. www.holtsauctioneers.com