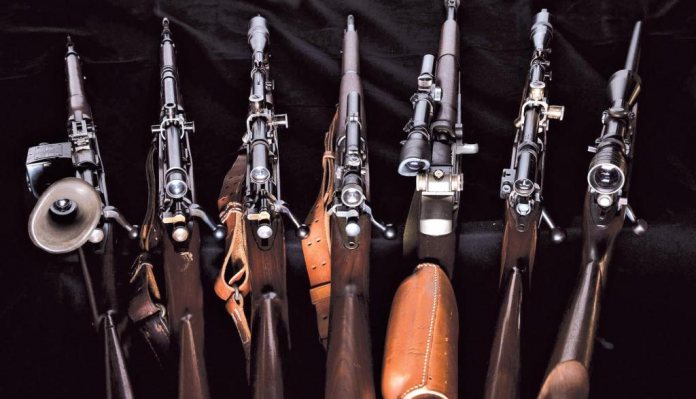 Cutting right to the chase, the 2018 September Premiere Firearms Auction held by Rock Island Auction Company is the largest firearms auction in industry history. Realising a total of $20,011,092 it carries that momentum directly into the December 2018 auction. There threatens to be another record-breaking year on the horizon for the Midwest auction house.

The clamor around the auction had been growing for months. The presence of several military vehicles, including several tanks and armored vehicles, captured the attention of even casual enthusiasts and the anticipation continued to grow as more and more pieces were announced. The Finest Known Winchester 1886, John Garand’s M1 Garand, a Singer M1911A1 that threatened the current world record, Colt Single Action Army serial number 2, and a seldom seen Winchester Model 1876 One of One Thousand all contributed to the buzz. It was a perfect storm of gun collecting that resulted in:

Before the auction even began, the excitement was palpable. Thursday’s Preview Day was the best attended in recent memory, and crews from NRA-TV and Guns.com were there to capture all the beautiful guns and auction highlights.

On the first day of auction, one didn’t have to wait long for the fireworks to begin. Lot 7 contained the Finest Known Winchester 1886 – a stunning John Ulrich masterpiece in excellent condition representing the highest embellishments offered by Winchester at that time. Bidding opened at $300,000 and quickly escalated for the worthy rifle. Within five minutes, the smoke had cleared and the realised price of $1.18 million was reached. This would be a world record for a Model 1886 had RIAC not sold Winchester 1886 serial #1 with ties to Geronimo for $1.265 million in May 2016. This is RIAC’s third firearm over the $1 million mark in just over two years!

Other successes of the day include lot 74’s exceptional Nettleton sub-inspected Colt (shown above) still bearing original polish lines on the backstrap and around the front sight that found $109,250, and a pre-production Luger Model 1902 carbine presented by Georg Luger in lot 428 that brought $80,500.

Day three had a lot to live up to, but it started strongly with a deluxe Winchester Model 1873 from the Mac McCroskie Collection in immaculate condition. Just four lots in, it remains one of the finest 1873 rifles known and went for $184,000 to a very happy collector. Another testament to the desirability of high condition firearms was the Winchester 1866 offered four lots later in lot 3008. Exceptionally well kept, inscribed, and with the Henry patent barrel, it would bring $97,750 and exceed its high estimate. Antiques of an earlier era also made their presence felt in several prolonged bidding battles. A 1743-dated Brown Bess musket more than doubled its high estimate for $54,625, a Revolutionary War era ‘Charleville’ Model 1763 flintlock quadrupled its high estimate when it found $34,500, and a stunning Solingen French sword in lot 3212, presented to the Marquis de Lafayette, also doubled its high water mark for $43,125. An exhibition grade version of an already rare Colt-Burgess carbine, with work executed by L.D. Nimschke, also made a fine showing by reaching $109,250.

The results made this an auction to remember, but the excitement made it one not to forget. Sharing moments like these with your collector friends and family is what it’s all about. With new levels of success come new levels of gratitude to all our collectors and consignors, without whom such results are unfathomable. We’ll enjoy the accomplishment briefly, but December is coming and turning into a sale that will have collectors counting down the days until it arrives. www.rockislandauction.com