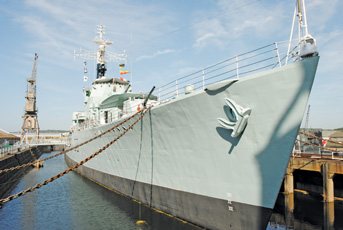 When the Royal Navy Dockyards at Chatham in Kent closed their gates for the last time in 1984 many people saw it as the end of an era. However, there were those who viewed it differently and saw it as an opportunity for a new beginning for the dockyards.

Chatham dockyards lying on the Medway River has a long association with the Royal Navy stretching back 400 years and was a centre for rope making, sail making and where more than 500 warships such as HMS Victory and HMS Kent and submarines were built. More than quarter of a century later the dockyardsat Chatham are still in the business of not only making history but also presenting it.

In the first days after the navy left the site it played host to some historical interpretations but over the years the fortunes of Chatham Dockyards have gone from strength to strength and resulted in the Salute to the ‘40s - the site’s own special tribute to life during WWII on the Home Front -which is now in its seventh year. The Dockyards cover an area of over 80 acres and for Salute the displays are divided into three main zones.

The site is a centre of heritage with the historic lifeboats collection, Victorian HMS Gannett, HM Submarine Ocelot from the 1950s and HMS Cavalier which completed convoy duties late in the war and today is the National Destroyer Memorial 1939-1945. There are many fine buildings on the site all of which lend themselves to re-enactment displays and the ships allow a unique presentation with gun firings.

The Home Front was the civilians’ war and, throughout the bombing, life had to carry on with people going to work and children going to school. The Salute to the ‘40s is a tribute to that spirit which kept the country going.

One of the first displays on entering the site was a sand-bagged position of a 3.7 inch anti-aircraft gun which gave firing demonstrations at set times each day. In this area there was a mock-up of a bombed-out house which served as a sad reminder that people lost everything in the bombing including families. The display by the National Fire Service and Auxiliary Fire Service was the best I have ever seen and really stood out. With two fire tenders, pump trailer and full crews the group was able to attend an air raid which had been arranged. Bells clanging and the firemen in full kit they turned out to respond to a building which had been damaged in the bombing. Smoke pyrotechnics created the atmosphere and the crews worked professionally. Cries came from the building and men ushed in to recover those who were trapped. They carried the injured out over their shoulders in the traditional ‘fireman’s lift’ method and reminded me of a scene from the 1943 film ‘The Bells Go Down’ starring Tommy Trinder and James Mason.

This was re-enactment with a difference by showing the civilian side of things during the ‘Blitz’ when London, Coventry, Liverpool and many other towns and cities were bombed. Unexploded bombs would have increased the dangers the firemen faced along with gas mains and if a garage was hit all the oil and petrol would have added to the hazards.

Looking at the scene I was reminded of the famous image of the milkman walking across rubble as he made his deliveries to the houses. It has since been proven it was a posed image but it showed how life had to carry on. Then, as I looked along the road, there, walking towards me was a milkman. It all added to the experience of life on the Home Front. It is a simple thing like this which adds that finishing touch to a display, just like the ladies who turned out in pinafores and headscarves carrying brooms to sweep rubble from the street. Depictions such as these open up re-enactment to all ages making it family entertainment for today.

Civilian cars from the period stood alongside the more familiar military vehicles such as Jeeps, armoured cars and trucks. Tractors reminded us of the important work done by the Women’s Land Army and the farms which produced the food. In one of the spacious buildings on site a whole frontage of shops had been set up to show a typical High Street in wartime Britain. A cinema, baker, police station, greengrocer and even a butcher - with not much meat! - all recreated a snapshot into the past. The back garden of a house complete with rabbit hutch and vegetable plot may not sound inspiring but it attracted attention and, like other displays, everything had to be constructed specially for the event. Everyone in each of the displays knew their history and answered an endless stream of questions.

A range of static displays by various groups depicting British and Allied troops allowed visitors to examine weapons and items of kit and ask more questions. There were ‘strollers’ who were just walking around ‘in costume’ but their presence added so much to the event. Local Defence Volunteers, LDV, which pre-dated the Home Guard, with shotguns, housewives with shopping baskets and even a Polish army officer in exile set this event apart. Non-stop period entertainment and traders’ stalls provided plenty to do and the opportunity to buy items of clothing for the 1940s wardrobe. An ‘Air Raid Experience’ where one could find out what it was like to be in an Anderson air raid shelter, life-size Hurricane and Spitfire fighters and lots of other vignettes made it an action-packed weekend.

It is not often that one gets the opportunity to experience the firing of a broadside from a warship’s guns, much less be allowed to watch the gun drill from a point close by the turret. The organisers of Salute thought it would be a great idea to fire all three of the Cavalier’s 4.5 inch guns from her A,B and Y turrets, the first time anything like it has been done since HMS Zulu was ‘paid off’ and left service in 1984. The Cavalier entered service in 1944 and even though late in the war she still performed valuable escort duties and back in the 1990s there was a huge move to save her for the nation. I first visited Cavalier back in February 2000, and stepping aboard her again after twelve years it was good to see how much work had been done to restore the ship and preserve her for the nation. She holds the Battle Honour of ‘Arctic 1945’ for her operational duties around Norway and escort duties to Russian convoys. The presence of re-enactors portraying crew members around the ship brought her back to life in a manner of speaking. HMS Cavalier is in a ‘wet dock’ to support her weight but it is a long process and an on-going one to preserve her.

I was allowed to stand behind B Gun on the condition I stayed out of the way and wore ear defenders. The gun crews were made up of men and women from the group called the ‘Wavy Navy’ which also had a display on the quayside. At midday on the Saturday three rounds were to be fired from each of the ship’s three guns and shell cases had to be prepared. The crews were kitted out in overalls, steel helmets and anti-flash hoods as they would have been when firing the guns in action. The flash hoods were to protect them in case there was any unburned powder which would flash back when the breech was opened to reload. In reality the shells would have been fixed which is to say the projectile head was fitted to the shell case and was a bulky thing to lift.

The three crews were co-ordinated by radio and the guns were traversed to the port (left) to fire over the open space of the dockyard. Once everything was ready the command to load was given and each gun replied ‘ready’. The order to fire was given and together the three guns fired. Reload was given and fired twice more. This whole structure shook and this was only with reduced charges and in dock. One can only guess at the energy released when the guns had to be fired for real. In pitching seas and under enemy fire it must have been an almost impossible task to aim and fire the guns. After the firing each gun was declared safe and unloaded and the turrets traversed back to their usual positions. It was an incredible experience and although the gun crews have done similar firings before they always observe rigorous standards in safety procedures.

The site buzzed with activity as trains shunted around the Dockyards, vintage buses carrying passengers and other displays such as the Royal Navy crew which operated a 20mm Oerlikon gas-firing gun to demonstrate it in the anti-aircraft role on a pedestal mount. Salute is an evolving event and this year the programme was full of displays which were new for this year. This is a treat for the senses and a real step back in time as events open up around you such as the air raids.

I extend my sincere thanks to Gail James and her staff for inviting me along and making my visit truly memorable. Congratulations to all participating groups and well done. The next “Salute to the ‘40s” will be held over the weekend of 21 and 22 September 2013 which is a day to put in your diaries. The Historic Dockyards also hosts other events throughout the year, including militaria fairs for collectors, so visit the Website for full details at: www.thedockyard.co.uk