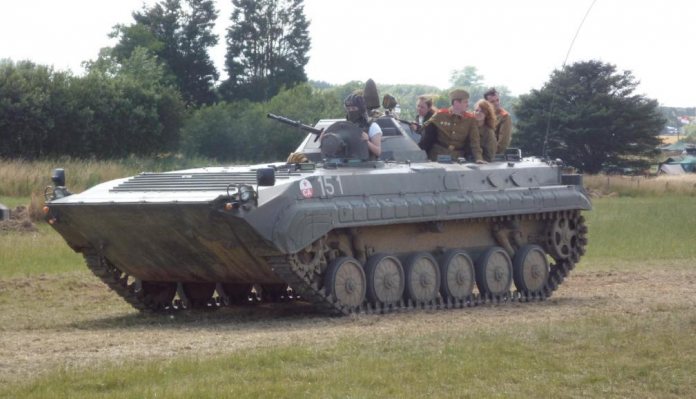 The War and Peace Revival calls itself ‘The Largest Gathering of Military Vehicles in the World’ and it certainly lives up to it! Military vehicle enthusiasts from all over the country and beyond take their beautifully restored vehicles to the show each year, to display them in dedicated areas but also to drive around the main arena, so that show visitors can actually see them in action. It’s obviously fascinating to be able to examine vehicles up close on a static display but watching them hurtling around certainly adds something extra! You will see a variety of vehicles from all over the world being represented, including British, German, American, Soviet and many other European vehicles. Tanks, armoured cars, half-tracks and motorbikes are all put through their paces, often as part of realistic battles from WWII, Vietnam and The Cold War.

Many dedicated enthusiasts get dug in and use camo netting and fake barbed wire to recreate some classic scenes from the last 70 years of worldwide warfare. The Re-enactment groups offer a truly fantastic experience to learn and see what things are like during those periods in time. The displays take a lot of work to create and are fantastic to see. It is a great opportunity to see and learn about what happened during various conflicts and to see the equipment and weapons and to also see all the other paraphernalia the average soldier carried with them into battle.

In the WWII Home Front Area, the dedicated members of the ‘Forward to Victory Living History Group’ are in their very own ‘pop up’ village of Trentham, ‘somewhere in the South-East of England’! People fought their own daily battles against worry, family separation, air-raids, homelessness and shortages of food and fuel, whilst also supporting the War Effort in a huge range of official and voluntary roles. Visitors can discover displays and vehicles centered around a village high street and visit the various shops showing the products that were available at the time.

There are also the Home Guard, Fire Service, ARP and Police displays, with re-enactors representing those who were ready to face real danger in the defense of the land. The ‘Home Front Marquee’ has demonstrations of wartime cookery, with a Ministry of Food lady demonstrating how people eked out their rations. There will also be a ‘Make Do and Mend’ Fashion show to give you ideas about using those curtains for something to wear!

Many enthusiasts visit to buy military equipment, deactivated weapons, uniforms etc. and the stallholders have all manner of items for sale. There is also the chance to see vintage vehicles, such as cars, commercial trucks and lorries and military model makers can get up close and personal with the displays in the dedicated areas.

Add in music from live bands and singers in the entertainment marquees and the chance to ‘Meet the Author’ and it’s clear that there’s something for everyone!