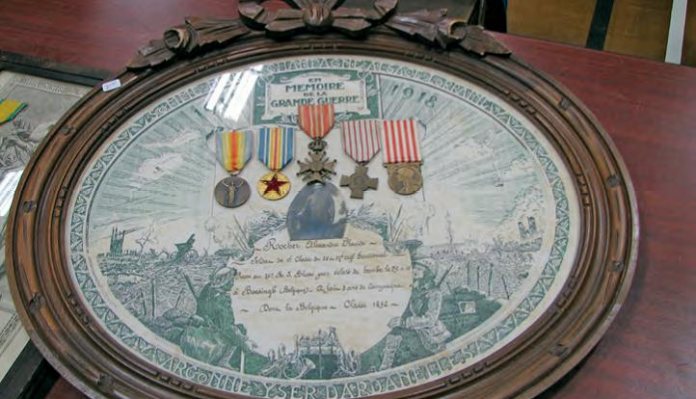 The hobby of collecting militaria has long been a popular pastime, but never more so than at present. Indeed, hardly a weekend passes without a militaria fair being held somewhere. Each event is different and offers something for all levels of collectors, from the novice to the most experienced and caters for all areas of interest.

No matter how many militaria fairs collectors visit, each one is special because it is the anticipation of making a find to add to a collection. One militaria fair organiser is Mark Carter, a highly respected trader of longstanding, whose interest in collecting militaria began in his boyhood. He held his first militaria fair in 1979 and today organises nine militaria fairs annually at three different venues, including Aldershot and Stratford-upon-Avon. The third venue is Yate Leisure Centre, near Chipping Sodbury, Bristol, BS37 4DQ, where Mark hosts four fairs.

All of Mark’s fairs are extremely popular with traders and very well attended by collectors. He recently invited me along to have a look at proceedings at his Yate venue, which, like all his militaria fairs, has a reputation for the high standard of quality of items for sale. On entering the hall where the fair is held, the range of collectables on offer was sufficient to satisfy all interests. From bayonets and books to medals and photographs, everything a collector could want was there.

The only section of collectables not available at any of Mark’s fairs is firearms of any description. The reason for this is to avoid the possibility of causing any upset. Despite this one rather trifling caveat, there is more than enough on offer with traders specialising in fully researched medals, with all the recipient’s details, to those with a more general range of items from different periods, including both world wars to post war. Mark himself specialises in medals, with his own stand at the fair offering an extensive range of international medals and awards.

The first trader I spoke to was Rob Hatch, who specialised in WWI commemorative items, especially the framed groups of medals with paperwork. He also had some very unusual books, which I could not resist. Just along from him was Geoff Newman, who trades in British and Commonwealth badges, including cloth insignia, cap badges and wartime units, such as the Timber Corps of the Women’s Land Army. At venues, such as this, collectors and traders engage in friendly conversation, which also includes the most novice collectors. It is hard not to buy something at these venues, even for somebody who may never have given a thought to collecting militaria. However, once that first purchase is made, it is the start of a fascinating hobby.

Many collectors like to walk around a venue first, to see what is on offer and then begin to go in search of collectables in earnest to meet their personal interest. At Yate, the stalls are laid out with plenty of room to move between, which allows collectors to see more easily what is on offer. One trade stand which had a good selection on offer, was that of Steve Brindley, who trades as SB Militaria. The items he had on sale ranged from the smallest personal artefacts to the larger items of kit. Throughout the day, he was busy answering queries from collectors. As I listened to him, I learned a few points which will be helpful in the future. Steve told me how he enjoys meeting the young collectors of today because, as he put it, they are the collectors of the future.

Traders had come from all over, such as Phoenix Militaria, down from London, which specialises in wartime propaganda items, from both Allied and Axis. The range of collectables in this area of interest is mainly paper-based, which is very delicate and hard to come by. Nevertheless, the items on offer were excellent quality and would make a fine addition to any collection. Talking to the traders, they confirm that the division of interest between Allied and Axis items is pretty much evenly split in both sides.

A relaxed mood permeated the venue, which allowed collectors to take their time looking and ask questions before deciding on purchasing an item. Even though it was unhurried, business was brisk, which reinforced the comments from the traders about there being a strong interest in militaria collecting. Collectors can have several different specialist areas, ranging from the most obvious, such as medals to bladed weapons such as daggers and swords, through to inert ammunition.

At Yate, there were several traders with ammunition-related collectables of offer, including ‘trench art’ from the First World War, which was created by the troops decorating spent shell cases. Prices for such items vary according to subject, condition and depending on whether it was Allied or German in origin. One trader had German artillery shells for sale, including a 75mm round for a StuG III and a fin-stabilised, hollow-charge Stielgranate41, as fired by a PaK36 3.7cm anti-tank gun.

The same trader also had a practice ‘Energa grenade’ anti-tank rifle grenade, complete with the intact powder-filled warhead, as used by the British army until the early 1970s. He also had a very strange-looking, bomb-shaped object, which he admitted to not knowing anything about. The two-piece body was made from plastic with a threaded join at mid-section and fitted with a bomb-like tail-fin. The rear section was made from clear plastic and the front end made from black plastic with a threaded recess into which could have been screwed a fuse.

The item measured around eightinches in length and defied identification from several dealers and collectors. If anyone looking at the photograph does know what this baffling object could have been used for, please contact me and I will pass on the details. That is the great thing about militaria fairs, you never know what you might find. It could be a real rarity or, as in this case, a real oddity.

Overall, prices were what collectors would expect to pay for such high-quality items and reflects the interest in militaria. There were bargains for the novice collector and for the more discerning collectors there were some medals from various wars and campaigns including Waterloo medals and Crimean War medals with campaign bars. Unfortunately, time passes all too quickly and before anyone realises it, the time has come for the doors to close. Still, there is no need to despair, because there are other venues and other weekends where collectors can track down further items.