A trip down Memory Lane 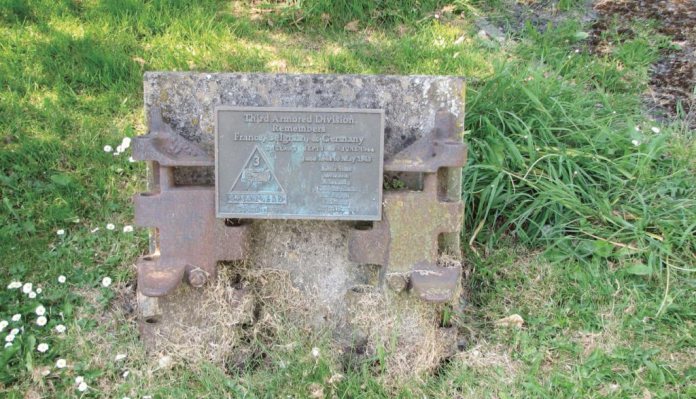 A few weeks back, I took time to visit the Wiltshire village of Mere, which lies just off the A303 road and can be accessed by either the B3092 or B3095, depending on the direction of approach. The main road through the village is Castle Street, which is an extension of the B3092 and it is along this route that free car parking is to be found. The reason for my visit was to track down the war memorial to the 43rd Wessex Division, which I had been told was located on Castle Hill.

Having parked, I spotted a very convenient sign directing me to the site I had come to see. As I followed the route, I came across a small monument consisting of a piece of tank track and a bronze plaque dedicated the US Third Armored Division. The division, with the motto ‘Spearhead’, had trained in Somerset until being sent to France in late June, after which it participated in the breakout battles including ‘Operation Cobra’. It was good to see the unit being remembered.

The climb to the top of the hill is easily manageable and from the summit there is a commanding view across the surrounding area. The spot is called ‘Castle Hill’ after the fact a castle had been built on the spot in the 13th Century. More than 800 years later and all evidence of the castle has long gone, but it’s easy to understand why it was built in the location.

I had reached my destination to see the memorial to the 43rd Wessex (Recce) Division, which had performed so well during the Normandy Campaign. In fact, the memorial is an exact replica to the one at ‘Hill 112’, which lies south-west of Caen in Normandy, and where the division fought a hard battle. I have visited Hill 112 many times and to see this memorial so far from the location of the action was a very moving tribute to those brave men.

Coming down Castle Hill I decided to take a walk around the village and my route took me down Angel Lane leading to the village cemetery. Strolling around the headstones, I noticed the distinguished outlines of Commonwealth War Graves Committee headstones. There are eleven such headstones from both world wars, which makes the cemetery a CWGC cemetery.

Mere is a small friendly village, into which is packed wealth of history and this makes it a Memorial Village and very worthy of being visited. It has a very good museum and plenty of places to take lunch. Look on the Internet for further information and I know you will make a visit. I will be returning, just because it is a great place to visit.