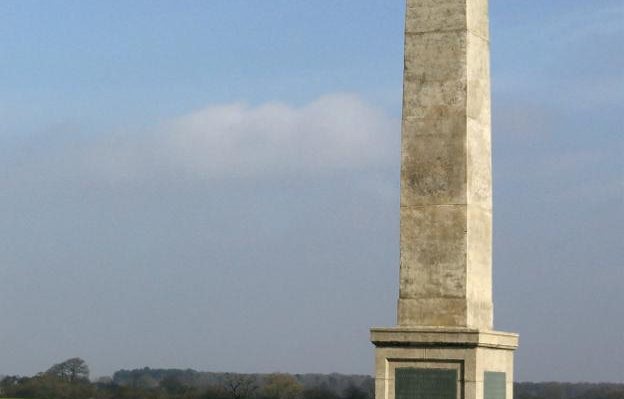 The English Civil War spread out to affect communities the length and breadth of the country. From the large cities and big towns down to small villages, the effects of the war were felt as it divided loyalties. There were sieges at fortified locations, such as Farnham Castle and grand estates such as Basing House, both in Hampshire. The set-piece battles were conducted across open fields, away from buildings, where artillery could fire and cavalry could manoeuvre without restriction.

The sites of these battlefields are marked on Ordnance Survey maps, being indicated by crossed swords along with the date. Even motoring atlases carry this feature so that the sites, many of which have been preserved because they make up part of agricultural fields, can be located and visited. One of the best-preserved of these battlefields is Marston Moor, lying some seven miles west of the city of York. Despite its location so close to the city and the fact it was the largest battle of the Civil War, it is not visited as much as you would think, which allows it to be walked undisturbed.

The English Civil War started in 1642, which means that when Marston Moor was fought on 2nd July 1644, the armies of Parliament and King Charles I had been fighting for two years. The background to the battle began the day before, when the Royalist army, led by Prince Rupert, raised the siege at York after which he continued to move west with his army of 11,000 infantry and 7,000 cavalry units. The Parliamentarian army of some 27,000 men, including 7,000 cavalry units, part of which was commanded by Oliver Cromwell, moved to block Rupert’s advance towards the Long Marston to Tockwith road, which runs across the area known as Marston Moor.

It was around 4 pm on the 2nd of July that both sides got their first glimpse of one another across the wide-open fields. Rupert deployed his army on the northern side of the road, which today is an unclassified route branching off the B1224, which runs between Wetherby and York. The Parliamentarian army, commanded by Alexander Leslie, 1st Earl of Leven, was drawn up in ranks to the south side of this road. Each side positioned their cavalry on their respective flanks and the infantry in the centre, but Leven’s deployment placed his forces on slightly higher ground, which gave him an advantage over Rupert.

A violent rainstorm broke and just after 7 pm and the Parliamentarian artillery opened fire, stirring Lord Byron, commanding the cavalry on Rupert’s right wing, to move forward. Opposite him was Oliver Cromwell, who moved his men forward to intercept the advance and succeeded in stopping the manoeuvre. Off to Cromwell’s right flank, Sir Thomas Fairfax advanced his cavalry unit to engage the cavalry on Rupert’s left flank but was stopped by Lord Goring. Seeing the problem, Cromwell led his men to restore the balance and forced Goring to fall back. Meanwhile, in the middle, the infantry was exchanging fire and into this Cromwell led his men to support the Parliamentarian centre.

By now darkness was falling but the battle continued, even though the men on both sides were exhausted. At around midnight, Rupert broke off the action and fled the field with the remnants of his army. He left behind some 3,000 dead and 1,500 men to be taken prisoner. The Parliamentarian army had lost around 2,000 killed and wounded.

Cromwell’s actions during the battle brought him to pre-eminence and eventually lead to his overall command. Today, the battlefield looks very much as it did 377 years ago, with the terrain unaltered. It lends itself perfectly to walking the site.

Time for a visit

Approaching the battlefield from the direction of Long Marston to the south, you are following a road that bisects the battlefield and actually helps in understanding the disposition of the opposing armies. This country road is narrow and takes you past a small junction on the right. This is Atterwick Lane and only a few hundred yards further along you will see the tall monument to commemorate the battle, which forms the junction with Moor Lane. Very few vehicles pass the spot and parking by the verge is easy and safe. Stand by the monument and take time to survey the site, today with its open fields. It is hard to imagine this was the scene of a hard-fought battle between thousands of men.

A handy information board is placed nearby for useful reference and it allows those visitors without a map of the site to become orientated. The diagram aligns visitors to indicate the locations where commanders such as Prince Rupert, Cromwell and Fairfax were positioned and what forces they had.

Alongside the monument is Moor Lane, which you can walk to pass through the location where Rupert’s cavalry commanded by Lucas and Dacre was positioned. Further off to the right is Atterwick Lane, where more of Rupert’s cavalry was positioned. Continue along the route until you come to a junction, turn sharply left and continue along Sugar Hill Lane, which brings you to an area marked on some maps as a burial mound. This is the site where many of the dead from the battle were buried.

Because much of the area is agricultural land, visitors must stay on the defined paths. There aren’t that many, but the ones that are there allow visitors to see the battlefield, even if it is in a limited way. This is where modern technology comes in handy because by viewing maps on your smartphone, you will find several sites to guide you around the battlefield, including the description put together by the Battlefields Trust (www.battlefieldstrust. com). The site is free of houses and unspoilt, leaving it an easy location to understand and walk, following a route picked from the list.

On the opposite side of the road from the memorial, there is a small ‘drove’ route that leads up to a spot known as ‘Cromwell’s Plump’. From this location, it is possible to look back down onto the positions of Rupert’s army.

Moving back to the road, turn left, walking in the direction of Tockwith, and on the right-hand side, you come to a turning into a small route called Kendal Lane. Walking down this path places you on the right flank of Rupert’s positions, and is where Lord Byron began his cavalry attack which was stopped by Cromwell.

Overall, it is a compact site but one well worth visiting. It helps provide an understanding of the Civil War and place the location in relation to other battlefields of the period.