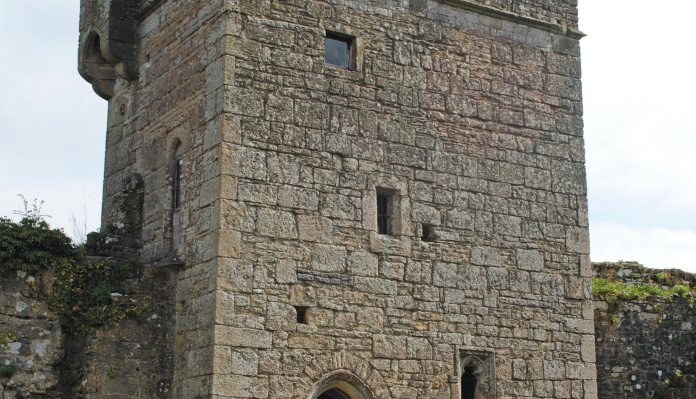 The Principality of Wales can boast having the greatest concentration of castles, for the size of the country, anywhere in the world. Indeed, there is hardly any area that does not have a castle or fortified structure, ranging from the magnificent examples such as Beaumaris on Anglesey Down to the remnants left in the town of Carmarthen. They all have their own unique history and played a part in shaping Wales to be what it is today.

One of these sites is Caldicot Castle in Monmouth, lying close to the border with England and between the two bridges crossing the River Severn. The town itself is mentioned in the Domesday Book of 1086 and is listed as an important area of agriculture. The castle begins to appear proper almost 100 years later, when Humphrey III Bohun, from a powerful land-owning family in the area, begins to build the castle in stone on the site of a former motte and bailey-style fortification.

By 1376, having passed through successive ownership several times, the castle passed to Thomas Duke of Gloucester, youngest son of King Edward III, on his marriage into the Bohun family. In 1399, a conspiracy saw him kidnapped and murdered and his possessions, as well as lands, confiscated. Over the coming centuries, the castle changed ownership several times and, somehow, always managed to avoid involving the castle in any conflict, including the protracted Wars of the Roses between 1455 and 1485.

The fortunes of the castle continued to fluctuate over the centuries until 1964, after 800 years, it was acquired by Chepstow Rural District Council in 1964 for the sum of £12,000. The following year it was opened to the public and included a small museum display. Today, the castle lies within 55 acres of country park, which is a popular spot for families and has become used as the backdrop to many re-enactment events, including the multi-period ‘Fortress Wales’ and military vehicle shows. It has also been used as a film location for period dramas.

The fabric of the castle and its immediate surrounding grounds prove perfect for such events and, in fact, the next such event, called ‘Wartime Wheels 2022’, is to be held over the weekend of 1-2 May this year, organised by the South-East Wales branch of the MVT. Visit www.mvt.org.uk

Although never being engaged in a prolonged conflict, the successive owners of Caldicot Castle were able to develop it into a comfortable, fortified manor house, where they could enjoy all the luxuries which went with the status. For example, the gatehouse entrance and flanking curtain walls are faced on the outside with dressed stone. Many windows also pierce the walls, which indicates this was a castle of comfortable residence as opposed to a centre for military operations. Passing through into the courtyard, the transformation is remarkable as it becomes a Tudor-style red brick building with oak beams. This is not the only surprise to confront visitors. In the courtyard, a 12-pounder naval cannon from Lord Nelson’s first flagship, HMS Foudroyant faces the gates to greet visitors and arouses their curiosity.

The fabric of the curtain walls surrounding the main courtyard is remarkably intact and anyone interested in the development of military architecture of the period will find plenty to study here. In plan-view, looking down from a bird’s-eye view, the walls are laid out in polygonal design, not really following any set design, to create an enclosure that roughly resembles an oval pattern measuring nearly 330ft in length and 216ft at its widest point. Examples of both square and circular-plan towers still survive and the keep is built on the original motte. This construction is impressive, with its walls measuring 9ft thick, with a diameter of nearly 35ft and a height of over 42ft. From the top, the view it affords is superb and it is possible to see the Bristol Channel.

Caldicot Castle lies close to the River Neder, which was once navigable, and together with the Bristol Channel, the castle would have served as a vantage point overlooking the maritime trade passing along these waterways. During the Civil War, it was briefly occupied by a garrison of the Royalist army, but there is little evidence that points to the castle being invested and besieged. What is certain is that it was ‘slighted’ by Parliamentarian forces sometime in the 1640s, an act which rendered it unsuitable for use as a military base. Renovations in the 19th century and later periods were undertaken very sympathetically and many of the original features were preserved. For example, the openings used by archers, the original dry ditch which surrounded the site and the dungeon which remains inside the keep at the basement level on the motte. This curiosity intrigues visitors who speculate the fate of prisoners kept in such a place and what crimes they had committed.

The small, on-site museum features displays from the Roman period, through the Middle Ages and into the 19th century, covering both local and social history to span the castle’s complete time frame. When special events are hosted at the site, including reenactment and military vehicle, the participating groups present their own displays of equipment, weapons and other objects relevant to specific periods.

Even on ordinary weekends, when there are no special events, there is a lot to see at Caldicot. Of course, the length of time spent on site is down to the individual, but I recommend at least 2 hours. Once the interior of the castle, with all its towers, stairways and rooms have been visited, there is the exterior of the walls to be walked.

To have survived for over 800 years of almost continuous residence and still have the ability to attract attention says much for the history of the site on which Caldicot Castle stands, having witnessed so many periods from Roman to Victorian, albeit by which time it was more of a grand country house than a castle. Nevertheless, it stands out and deserves to be visited. On a closing note, if you should be planning a visit, don’t forget your camera because this is one place the memory of which you will want to keep.