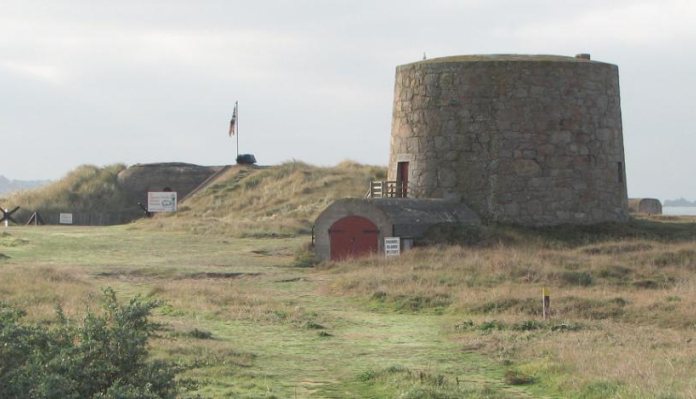 Today, the British Channel Islands, lying closer to France than England, are one of the places where visitors can relax and enjoy a range of water sports. However, visitors to the islands cannot avoid seeing reminders from the period, which is unarguably the most famous chapter in their long history. Dotted around the countryside and along the coasts can be seen concrete defences, which look oddly out of place in these tranquil settings. These are the indelible scars from the time when the islands were under German Occupation from 1940 until 1945.

Just as the last troops were being evacuated from Dunkirk, the Channel Islands became the latest territories to fall under German Occupation. By the time of the D-Day landings in 1944, the islands had been transformed into fortresses. Across the islands, hundreds of bunkers to house heavy guns were built, minefields, anti-tank walls and anti-aircraft guns dominated the islands. Yet, when they were Liberated in May 1945, the German garrison surrendered without a shot being fired.

Almost 75 years later, many of these bunkers have been put to other uses than that for which they were originally intended. For example, some now serve to house museum exhibitions to tell the story of those five long, dark years. One such bunker to be transformed into this use, is the Channel Islands Military Museum at La Grande Route des Mielles, Jersey, JE3 2FN, located at St Ouen’s Bay on the western end of the island. Known originally as Resistance Nest Lewis Tower, after the nearby Martello Tower of that name, the bunker formed part of the defensive line along this stretch of the island’s coast.
Originally, the bunker housed a 10.5cm Schneider gun of WWI vintage and the site was operated by a crew of 12 men. It was also equipped with machine guns for self-defence and all these weapons would have overlapped their fire with other defences along the coast and yet more sited further inland. Putting the museum in the bunker was the idea of Damian Horn, who owns and operates the site and has spent a lifetime collecting militaria, with a special emphasis on the German Occupation. The result is the finest collection of artefacts relating to the period to be found anywhere across the islands.

This year, the museum celebrates its 30th anniversary, having opened its doors to the public for the first time in May 1989; it was no easy task to get it ready. To begin with, Damien, with the assistance of dedicated helpers, had first to clear away a mountain of rubbish, which had accumulated over more than 40 years, before getting down to the real business of creating a museum. For three months, this small army of volunteers worked tirelessly to install electric lighting, display cabinets had to be specially built to size to fit the interior, painting walls and doors. Original features, such as gas-tight doors, were replaced, along with any number of other jobs that needed to be done.

The German Occupation of the islands was unique among all the other countries under occupation. Firstly, it was the longest lasting. Secondly, it had the greatest concentration of troops per capita of any other zone of occupation, which at one point reached a ratio of two troops for every five civilians. From the military historian’s point of view, the occupation is interesting enough, but it is also fascinating from the socio-economic aspect and the military architecture. Each of these can be examined at the Channel Islands Museum, which has a wealth of documentation, photographs and personal artefacts to illustrate the points.

The cabinets are full of rare and unusual equipment used by the German army and everything is laid out and can be seen properly. This includes weapons, optical and radio equipment and the generator room has been fully restored to show how the bunker was self-sufficient. The civilian side of the occupation is illustrated with personal items, identity cards, photographs and the Red Cross parcels sent to feed the islanders when food was scarce.

One of the larger items is a 2cm FlaK light anti-aircraft gun, complete with ammunition and tools for service and maintenance, which is displayed in one of the rooms. Display cabinets line the walls, each full of items, and continue into other rooms. Whilst walking around, a sound recording of interviews with Islanders who lived through the occupation is played and hearing them talk about their personal experiences is like listening to a private conversation. There are many extraordinary stories which visitors can learn about from the time, such as that of Lt. W. R. Davis, a pilot of a P-47 Thunderbolt with the USAAF, who crashed on Jersey, was taken prisoner and later escaped.

There is much more to the museum than the display of artefacts. For example, looking at the interior layout provides an impression of conditions for the men who were the crew in the bunker. Outside, on the roof, is the turret of a captured French FT-17 tank, which was armed with a machine gun. These were used to provide self-defence and today to see such features on bunkers is unusual. The Martello Tower, after which the bunker was named, Lewis Tower, is close and shows it would have formed part of the position. At the base of the tower is a concrete shelter built by the Germans to house a searchlight.

Being right on the coast, it is possible to walk to the sea wall, which is, in fact a German anti-tank wall, and looking along the coast visitors can see how all the defences would interlock. This is a rare chance to study German wartime field and coastal defences and not even in Normandy do such opportunities exist. Indeed, you will find it hard to stop taking photographs of the site.

Visitors can purchase DVD films and books relating to the Occupation and, for militaria collectors, there is the chance to pick up some original items which are for sale. This range includes badges, medals, shell cases and other items, including paper documents, such as wartime stamps. For modellers and war gamers, they too will find this a fascinating location to visit and provide them with lots of reference material.

The Museum will be open from the 15th of April through until October, but full details of opening hours and location can be found on the Website. At the time of writing, Damien asked that readers be made aware that the website is being updated and will be available at: cimilitarymuseum. co.uk. This is a small, privately run museum, with friendly, helpful staff who will take time to chat if not too busy. If you are visiting Jersey, make sure this is the one location connected with the German Occupation you make sure to put on your list to see.