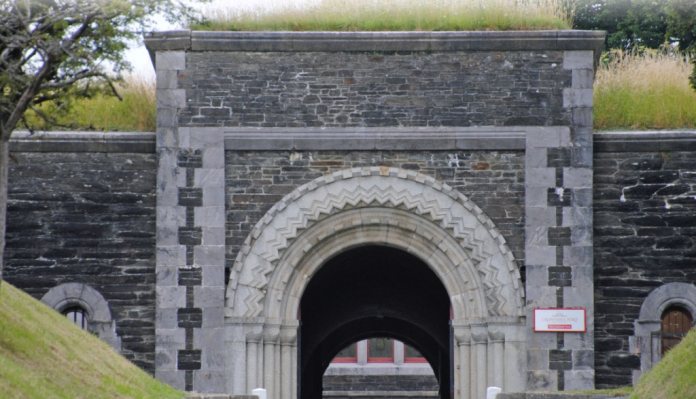 It is sometimes said that good things come to those who wait. Largely this depends on what you are waiting for and how long you are prepared to wait. Back in July this year, I had the chance to end the waiting period for something I had long wished, when I learned that Crownhill Fort, just outside Plymouth in Devon, was hosting a one-day special event.

Responding to my enquiry about details of the event, Ed Donohue, the General Manager of the site, very kindly extended an invitation for me to visit and see things for myself. Having driven down and parked, I approached the imposing entrance filled with anticipation at the prospect of what I was going to see. It had only taken 25 years to get this far, so no one could accuse me of not being patient.

A spot of history

In 1987, Crownhill Fort was acquired by the Maidenhead-based Landmark Trust in Berkshire, a charitable organisation founded in 1965, which preserves more than 200 historic buildings around Britain, from forts to lighthouses. The site was opened to public visits in 1997 following a restoration programme of several years of hard work, and it was probably around this time I first heard of Crownhill Fort.

The history of the site goes back to the mid-19th century when Britain faced war and possible invasion from France. In response to the threat, a massive defensive fortification programme was undertaken, with special emphasis being placed on the protection of the naval bases, including Portsmouth and Pembroke. The former received particular attention for defence with no fewer than 28 sites being eventually built, at a cost of 3 million pounds (some £345 million today). The budget for building Crownhill Fort alone was £76,000 (over £8.7 million today). In the end, the war with France never came and over the years the defences, which never fired a shot in anger, including sites such as Fort Nelson, became known as ‘Palmerston’s Follies’.

Crownhill Fort was completed in 1876 and remained in almost unbroken use by the military until 1986, having witnessed both world wars and being used as an assembly point for units departing for the Falklands War in 1982. It took a workforce of some 2,000 men, two years to prepare the site and construct the fortification, which on its completion formed a line of 11 positions, if the site at Egg Buckland is included, to provide a chain of formidable defences to protect Plymouth from attack across the landward side.

In plan-view looking down, the fort covers around 16 acres and is a seven-sided construction encompassed by a ditch, cut into the living rock, running a length of 1,173 yards. The ditch is 30ft wide and 30ft deep, to present an obstacle to any attacker. The design of the fort presents a very low profile, which hides its strength. Inside the walls, there are more than 2,640ft of tunnels to allow the garrison to move safely to any of the four fighting levels within the grounds. Firing positions for 32 cannon and six 13” calibre mortars were located at intervals and the walls provided firing slits for 275 infantry to give an all-round defence, served by a garrison of 300 men.

Today, after more than 110 years of military service, the site has been transformed into a remarkable place, where military enthusiasts and family groups alike can visit to see wellpreserved examples of original 19th-century military engineering that have been restored. For instance, a ‘Double Haxo’ casemate, where two 7” calibre RBL guns were mounted, provides a view into the ditch and the field of fire. A replica 110-pound Armstrong RBL has been installed here, and at a nearby firing position, a replica muzzle-loaded 32-pound cannon has been installed on a pivot slide mounting, showing how the guns would have looked.

In the 1880s, special Moncrieff ‘disappearing’ mountings for artillery, designed by Colonel Sir Alexander Moncrieff, were installed at the fort. These were fitted with a counter-balance system that allowed the crew to load the 110-pound gun whilst remaining undercover. When loaded, the gun was raised to fire and the recoil forced the counter-balance weight to depress the gun ready to be reloaded. The example of this rare mounting, one of only two functioning types known in the world, is original. However, the gun, used to fire blank charges during events, is a replica Armstrong 110-pound RBL.

Only twice during more than a century of military service was the fort ever put to use for its intended purpose: the Victorian period and WWII. To reflect this, two barrack rooms have been fitted out as museum exhibitions for each of these periods. Firstly, the Victorian period, equipped with beds and personal items, such as photographs, along with uniforms and kit, to demonstrate life in the army. Other aspects shown include laundry, heating and eating arrangements and other minute details. A display case in the corner shows artefacts of the period that were recovered during renovation work, such as glass bottles, clay pipes and irons.

During WWII, anti-aircraft weapons were installed at the site and this role is reflected in the second barrack-room, which has been laid out with equipment, uniforms and kit from the period. With rifles in the racks and uniforms hanging up, the scene looks as though the soldiers have just stepped outside for a moment. During the First World War, the fort was sufficiently remote so as not to warrant any significant alterations and was used as a transit centre for troops being sent overseas.

On the day of my visit, the programme of events included a presentation on historical firearms by Ian Caunter, a volunteer at the fort, using weapons from his own personal collection. Ian pitched it just right for visitors, not too technical and plenty of anecdotes. He explained the intricacies of rifles such as the Martini-Henry, the Snider with its ‘rolling’ block, the SMLE and the Winchester 1873. Handguns ranged from a ‘pepperbox’ pistol to a Colt ‘Navy’ Pattern as used during the American Civil War, (another country but still in the Victorian period) and some other collectable designs including ‘pinfire’ types.

Due to COVID-19 restrictions, the tunnels under the fort were not open, but Ed Donohue told me there is as much to see below ground as there is on the surface. For example, the ammunition hoists to lift the shells for the guns are still intact. In which case, when things return to normal, be prepared to spend a whole day exploring this wonderful and intriguing site. You will not be disappointed. There are many details to see, from the refurbished cells to the original toilet block, which has the original screens between the cubicles but does have modern plumbing. It is points of detail such as these that set Crownhill Fort apart from any other location dating from the period and a must for any military enthusiast to visit.

The site is located off the A386 road, which runs north from the A38, screened away by mature trees from the surrounding residential and retail development. It is a remarkable example of military architecture hiding in plain sight and its condition is down to the dedication of the staff and team of volunteers who continue to preserve the site. Details of future events, including gun firing displays and opening times, can be found on the fort’s website (www. landmarktrust.org.uk/crownhill-fort).

Before I left, I asked Ed if I could return to see the tunnels when COVID restrictions are lifted, to which he said yes. So, when that happens I’ll be heading back to Crownhill Fort. I only hope it doesn’t take another 25 years!

The Landmark Trust has created self-catering accommodation at some sites, including Crownhill Fort, to provide unique holiday rentals with a difference. Where such arrangements exist, the two sides of the historical properties operate together but independently from one another. For further details of this service and other aspects of the work of the Landmark Trust, visit their website (www.landmarktrust.org.uk).